Lazio: checks on passengers on flights infected with Omicron. Asl: low viral loads thanks to vaccines

The man would have arrived in Fiumicino from Mozambique. After Milan he was also at home where he infected his family. Classes of children in quarantine. Asl Caserta: low viral loads thanks to vaccines. n isolation two classes, so far no case. 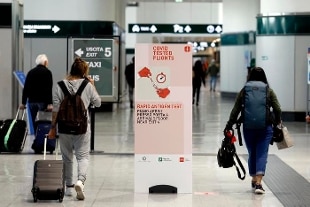 The passengers of the flight that departed from South Africa and landed in Fiumicino on 11 November last on which the Italian infected by the Omicron variant was traveling will be swabbed.

"The procedure provides that the ministry of health must provide us with the names of the passengers through boarding passes. As soon as they are available we are operational", explains the regional councilor for health Alessio D'Amato.

According to some newspapers, the Caserta patient infected with the Omicron variant is an Eni employee. It would have landed at Fiumicino airport departing from South Africa and coming from Mozambique on 11 November last. At the time of departure he had no symptoms and was negative for Covid.

After arriving at the Roman airport he went home to spend a few days with his family in Caserta, where he lives with his wife, two children and two in-laws. Then he went to Milan to undergo a medical examination scheduled by his company where he was subjected to a Covid swab.

Following the emergence of the Omicron alarm, insights were made on his case.

The genome was sequenced at the Laboratory of Clinical Microbiology, Virology and Bioemergency Diagnostics of the Sacco Hospital in Milan. The analyzes will indicate that his family members are also positive and the classes of the two children have been quarantined in

Caserta; two classes in isolation, so far no cases

Two primary school classes in Caserta in isolation for precautionary reasons following the first case of positivity to the Omicron variant, these are the classes attended by the two sons of the man, both positive, where, however, no new cases have emerged. In recent days the ASL of Caserta has traced all the contacts made by the man and by his relatives, in particular by his children, carrying out a few dozen swabs to the pupils and teachers of the two classes; already two series of tests carried out after five days, and both have given negative results.

The health conditions of 'patient zero' and of his five cohabiting family members are good: in all four adults, all vaccinated, and two children.

"The situation is under control - says the general manager of the ASL of Caserta Ferdinando Russo - patient zero and his family members have a very low viral load, and this, I am referring in particular to adults, is due to the fact that they are vaccinated with two doses ".