"Another round of ideological struggle": how Russia reacts to statements about the "invasion" of the Russian Federation in Ukraine

With its information campaign about the allegedly impending "invasion" of the Russian Federation into Ukraine, the American side wants to push Kiev to foment the conflict in Donbass. This was stated by the head of the Foreign Intelligence Service Sergei Naryshkin. He called the reports of the intervention "nonsense" and noted that the US State Department is actively supplying this kind of information to its allies, as well as to the American media, which are fanning this agenda. Experts, in turn, remind that recently such campaigns, designed to destabilize the situation on the borders of Russia, take place every few months. 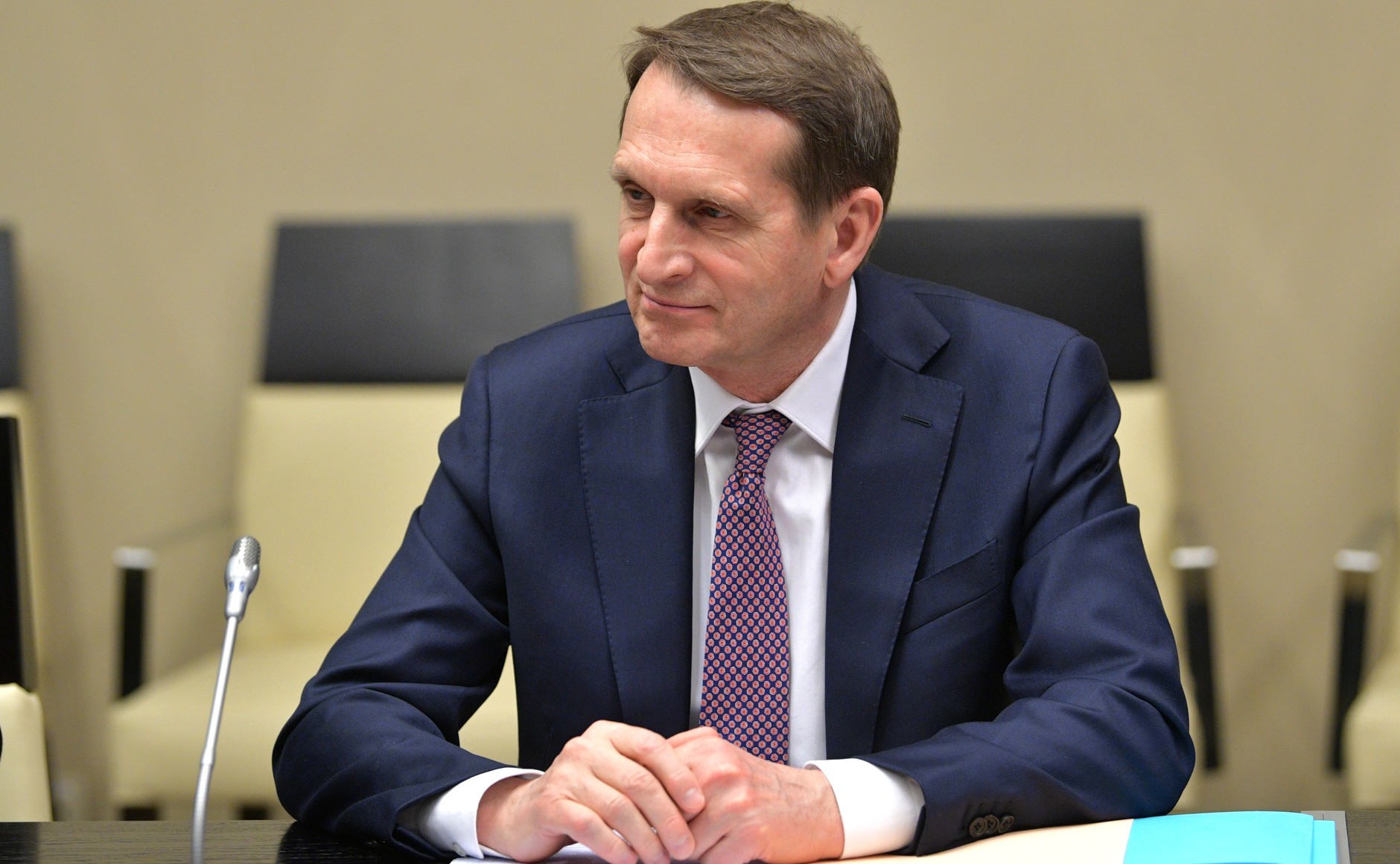 The purpose of the US information campaign on Russia's allegedly preparing "invasion" of Ukraine is to provoke Kiev to foment the conflict in eastern Ukraine.

This was stated by the head of the Russian Foreign Intelligence Service Sergei Naryshkin.

“The goal is to try to push the uncontrolled Kiev authorities with renewed vigor to rekindle the conflict that is taking place in eastern Ukraine.

Moreover, for the United States, Ukraine in this whole story is a consumable, but the desire to reignite the conflict with renewed vigor.

We, of course, need to maintain restraint and strengthen the defense capability of our country, "Naryshkin said on the Russia 1 TV channel.

The head of the SVR stressed that the main beneficiary of this information campaign is the US State Department.

“All this around this topic is a malicious propaganda action by the US State Department.

The State Department is pumping these fakes, this lie, and its allies, and the heads of the media and political centers of the United States so that they multiply, multiply and multiply this lie.

And they inflated a rather big bubble around this, ”Naryshkin explained.

At the same time, the publications of the American media about the imminent invasion of the Russian Federation into Ukraine are, according to the head of the SVR, "nonsense."

“I must reassure everyone, nothing like that will happen,” said Sergei Naryshkin.

Earlier, the SVR issued a statement in which it was noted that the US State Department "through diplomatic channels brings to its allies and partners absolutely false information about the concentration of forces on the territory of our country for a military invasion of Ukraine."

“It is surprising at what speed the previously quite respectable foreign policy department is turning into a mouthpiece for false propaganda,” the SVR press service noted.

We will remind, on November 1, the American publication Politico reported that Russia is allegedly pulling troops to the Ukrainian border.

The material stated that they recorded a build-up of armored units, tanks and self-propelled artillery, as well as ground troops concentrated near the city of Yelnya.

The authors of Politico also stated that the units of the 4th Armored Division of the RF Armed Forces were allegedly moved to the regions of Bryansk and Kursk near the northern border of Ukraine.

On November 3, Russian Foreign Ministry spokeswoman Maria Zakharova commented on the reports of the American media, calling them a "fake campaign."

The diplomat drew attention to the fact that Politico, The Washington Post and Foreign Policy published their articles "as if on cue."

“This was not one fake, it was a whole fresh fake campaign in the American media,” Zakharova emphasized at her weekly briefing.

She recalled that Yelnya is located hundreds of kilometers from the Ukrainian border.

In turn, the press secretary of the Russian President Dmitry Peskov called the Politico article, which began the information campaign, "a poor-quality stuffing."

“Probably, the quality of these publications is not even worth commenting on and, in general, you should not pay any attention to them, because you yourself saw: they are talking about the border with Ukraine - they show the border with Belarus,” said Peskov.

At the same time, representatives of the US State Department, the White House and the Pentagon have regularly made statements that America is "concerned" about the movement of Russian troops, which they have repeatedly called unusual.

Despite the disavowal of photographs and materials circulated by Politico and other Western media, the information campaign continued.

So, on November 11, the Bloomberg news agency reported that Washington allegedly warned the European allies about the imminent invasion of Russian troops into Ukraine.

At the same time, the agency referred to anonymous sources who reported that the US forecast was allegedly supported by some publicly available evidence.

CBS News then reported on November 20 (also citing unnamed sources) that the invasion plans were allegedly related to weather conditions.

“US intelligence officials are warning European allies of the possibility of a Russian military invasion of Ukraine, and the likelihood of such an invasion increases as the weather gets colder.

The invasion depends on weather conditions, but if the West does not intervene, it could happen within a few weeks, ”the channel's website said.

On November 22, Bloomberg again reported that American intelligence allegedly has plans for a Russian attack on Ukraine in early 2022.

It is worth noting that Ukraine's position on the "Russian invasion" changed as publications on this topic appeared in the American media.

So, in early November, after the publication of Politico material with satellite photographs, the Ukrainian Ministry of Defense denied reports of an alleged increase in the group of forces near the Russian-Ukrainian border.

"According to the Main Intelligence Directorate of the Ministry of Defense of Ukraine, as of November 1, 2021, an additional transfer of Russian units, weapons and military equipment to the state border with Ukraine has not been recorded," the Ukrainian Defense Ministry said.

Subsequently, on November 4, a similar statement was made by the official representative of the State Border Service of Ukraine Andriy Demchenko.

Later, on November 15, he again announced that there was no accumulation of Russian troops on the border.

“Directly near the border, we do not record any movement of equipment or military personnel of the neighboring country.

If any actions do occur, they can take place tens or even hundreds of kilometers from the state border, "TASS quoted him as saying.

President Volodymyr Zelensky said that he received information about the actions of the Russian Federation from Kiev's western partners, and called them "psychological pressure."

“Recently there was information about a possible exacerbation of the“ disease ”- our Western partners provided data on the active movement of Russian troops along the Ukrainian borders and on the increase in their concentration.

First of all, we are grateful to our partners for the information.

I hope that now the whole world can see who really wants peace and who is concentrating almost 100 thousand troops on our border, ”Zelensky said in a video message released on November 10.

In turn, the head of the Main Intelligence Directorate of the Ministry of Defense of Ukraine Kirill Budanov on November 21 told the American military-political publication The Military Times that the Russian Federation allegedly plans to invade the republic in late January - early February 2022.

However, on November 26, during a press conference, Volodymyr Zelenskyy called the current situation "intimidation" by the media.

I want to say right away that from some platforms, the media are really intimidated that tomorrow there will be a war, ”the president said.

At the same time, Zelensky assured the event participants that Kiev fully controls its borders and is ready for any escalation.

Experts, in turn, note that Moscow's reaction in this situation, namely the statement by the head of the Foreign Intelligence Service, Naryshkin, indicates that the anti-Russian information campaign has gone too far.

"In fact, Naryshkin's words are the designation of red lines and the determination of the customers of the information attack, which has unfolded recently," Vladimir Shapovalov, deputy director of the Institute of History and Politics at Moscow State Pedagogical University, emphasized in an interview with RT.

From his point of view, the inconsistency of Ukraine's position regarding the presence of Russian troops on its borders suggests that the picture in the information field is completely formed by the United States.

“In fact, we are talking about the fact that Washington corrected Kiev, which for some reason initially did not act in unison with the statements of the American curators,” the analyst explained.

According to him, the current campaign is designed to destabilize the situation around Russia.

“The medium-term goal is to destabilize the situation on the borders with Russia, drag it into conflict in order to weaken it and, therefore, so that the Russian Federation cannot play on the entire surface of the“ chessboard ”, participate in global politics and protect national interests,” Shapovalov said. ...

According to Washington's calculations, a series of border conflicts can "tie the hands" of Russia and weaken its influence on the world stage, added Shapovalov.

In turn, Vladimir Batyuk, head of the Center for Political-Military Studies at the Institute for the United States and Canada of the Russian Academy of Sciences, recalls that the "concerns" of Western countries in connection with the situation on the border with Ukraine and the alleged actions of the Russian Federation are circulated in the media every few months.

"A similar situation was observed in the spring of this year, when alarming statements were made about the transfer of Ukrainian troops in an eastern direction and there was evidence that the Russian Federation was allegedly transferring troops towards the border with Ukraine," the expert said.

He also drew attention to the fact that neither Ukraine nor the West can in any way work out a clear position regarding the likelihood of a "Russian invasion".

“Zelenskiy, in his last speech, was skeptical about the possible prospects for a Russian invasion.

At the same time, in the West, alarmists insist that Russia's intervention should be expected literally today or tomorrow, as a last resort in February 2022.

Interestingly, such predictions can be made with absolutely no consequences for your reputation, ”the expert noted.

At the same time, he believes that next year the public's attention will already be switched to some other events and crises.

“Therefore, the inflation of the anti-Russian agenda can be attributed to another round of the ideological struggle between the West and the Russian Federation,” the political scientist concluded.