A Latvian band sings "Zayed's House" in Arabic, in honor of the UAE's fiftieth anniversary

Yesterday, Expo 2020 Dubai hosted a folk songs group from the Republic of Latvia, which was formed specifically to sing in the international event as part of its country's celebrations of the National Day, offering a special gift to the Emirates on the fiftieth anniversary, through a song performed in Arabic as a gift to the wise leadership in the UAE 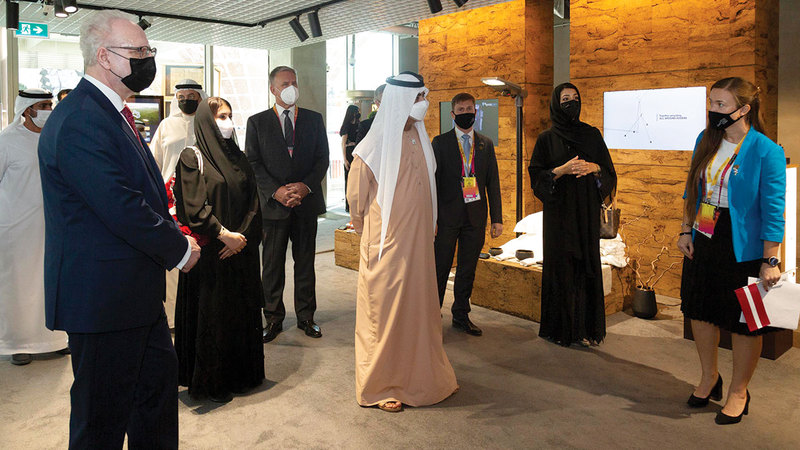 In the presence of Nahyan bin Mubarak and Reem Al Hashemi

A Latvian band sings "Zayed's House" in Arabic, in honor of the UAE's fiftieth anniversary

Yesterday, Expo 2020 Dubai hosted a folk songs group from the Republic of Latvia, which was formed specifically to sing in the international event as part of its country's celebrations of the National Day.

The "Latvian Expo" band performed its song "Bayt Zayed" in a very clear Arabic language, and its three members began chanting the meanings written in front of them, which was met with warm applause from the audience in celebration of their country's National Day in Al Wasl Square in the heart of "Expo 2020".

The ceremony was attended by the President of the Republic of Latvia, Igles Levits, and his wife, Sheikh Nahyan bin Mubarak Al Nahyan, Minister of Tolerance and Coexistence, Commissioner-General of Expo 2020 Dubai, and Reem Al Hashemi, Minister of State for International Cooperation and Director General of the Expo 2020 Dubai office.

Intras Bosoulis, the only man in the trio that also includes sisters Asnati and Aurelia Rantsani, said they only rehearsed the song three times with the help of an Arab friend in Latvia.

He added, "The UAE embassy in the Republic of Latvia provided us with the required assistance and support.

I feel very happy that we came here and that we presented this song for our clothes and our national identity out of love for the UAE and its leadership.”

Band member Asnati Rantani said, “What a great honor to come here, this place is so beautiful and people liked us so much, we see the welcoming of the song, and the positive reactions from the audience.

We almost cried at the reaction of the people around us, and we felt so happy.”

She added, “For me, the most important thing in music and singing is to spread joy, love and friendship.

This is a really big moment for us, especially since our message has successfully reached the Emirati people that we love them, and appreciate the great effort they have made to make this international event appear beautifully.”

The trio band arrived in Dubai only five days ago, where they present two other concerts, one at “Expo 2020 Dubai”, and the other outside its location, and the performer Aurelia Rantani is looking forward to a continuous positive reaction from the Arab public, after the warm welcome that the band received during the show in Al Wasl Square. .

Band member Aurelia Rantsani said: “The reaction from the audience and people here has been very nice, very positive.

Everyone stood and applauded, and we felt a true friendship between the two countries, and proud of the message we presented that highlights the Latvian people’s love for the people of the UAE, and our great appreciation for the exceptional leadership of the country.”