Air pollution in Pakistan's second largest city is at a life-threatening level. Now the city's schools and private offices are closed on Mondays to extend the weekend in an attempt to slow down the smog. 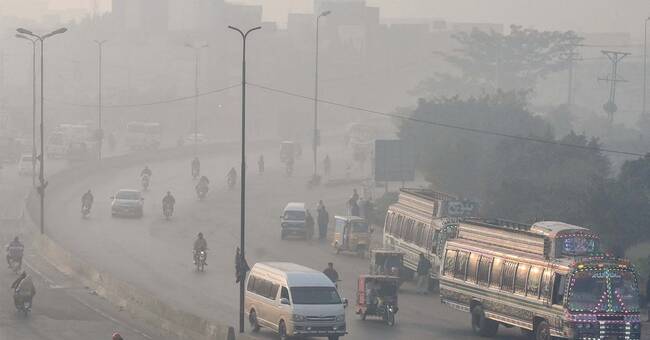 In Pakistan's second largest city, Lahore, air pollution levels have been at life-threatening levels for some time, and last week the city was the world's most polluted, according to Swiss Iqair, which measures air pollution.

Lahore is now closing both schools and private offices one day a week until January 15, in the hope that a three-day weekend will reduce smog during the winter season.

Air pollution is measured according to the AQI index, where anything above 300 AQI is classified as a health emergency that affects everyone in the area.

Last week, 348 AQIs were measured in Lahore, where about 12 million people live.

Since then, New Dehli in India has bypassed Pakistan, where 442 AQIs were measured.

Air pollution in Pakistan has increased in recent years and consists of a mixture of diesel exhaust fumes, smoke from crops that are being burned and increasingly cold winter temperatures.

Together they form clouds of smog that stand still over the cities.

The smog reduces the service life by five years

In Lahore, the population has felt an increasing desperation and the city has felt uninhabitable, writes The Guardian.

-When you open a window or go out, you see no sky.

There is smog everywhere.

We inhale it, and toxic air pollutants have become a part of our lives and bodies, says Ububaker Umer, who lives in Lahore, to The Guardian.

Residents have submitted signatures to Lahore's courts demanding that the authorities take action against the smog.

In Pakistan, life expectancy is estimated to be shortened by an average of 3.9 years due to air pollution, according to the report Air Quality Life Index (AQLI), conducted by the Energy Policy Institute at the University of Chicago.

-The government must do more than close schools, Lahore has become an uninhabitable city, says Ububaker Umer.