Mattarella meets Macron at the Quirinale, tomorrow the signing of the bilateral Treaty at Colle

The signing of the Treaty, "an absolute first for Italy, which has rediscovered ambition and initiative in Europe", commented by the Elysée, can also be read as "a victory over Italian nationalists who have a Risorgimento vision of the relationship with France. " 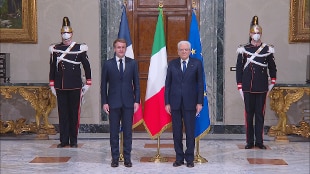 November 25, 2021 The President of the Republic, Sergio Mattarella, meets the French President, Emmanuel Macron, at the Quirinale, as part of his visit to Rome for the signing of the "Treaty for enhanced bilateral cooperation". After the meeting between the two heads of state, a lunch will be held in the evening. The signing of the "Treaty" by President Macron and Prime Minister Mario Draghi is scheduled for tomorrow morning at the Quirinale, in the presence of the two delegations. Macron and Draghi will then be at Villa Madama at 9.30 to illustrate the contents of the agreement.

Macron arrived at the Quirinale and was welcomed by President Mattarella. After the interview, Macron will move to Palazzo Chigi for the meeting with Draghi. Then at 9 pm he will return to the Quirinale for the dinner offered by Mattarella.

The basis of the Quirinal Treaty "is solid, robust, now Italy and France must show the political will to give it substance and apply it". On the eve of the signing of the document in 12 chapters plus a 'feuille de route', a roadmap with a list of operational initiatives, the bilateral treaty of enhanced cooperation will frame future relations between Rome and Paris. The goal, among others, is to create dialogue mechanisms to avoid or contain possible misunderstandings or misunderstandings in the bud, mindful of the tensions of the recent past, which resulted in the diplomatic crisis of 2018.

The negotiations, which only got underway this year, after the slowdown due first to the tensions between the two countries and then to the pandemic, "ran aground" in recent months on some points, informed sources say, but, given the will policy to proceed, it was possible to find "adequate formulas acceptable to both".

Thus for example on the political commitment of Rome and Paris to support each other in order to enter the formats from which one of the two countries is excluded, or on the theme of European sovereignty, with the addition of the term "democratic" to give a connotation "less Gaullist "to the wording. And a lot of work has been done to underline how the Sahel and the Mediterranean are of equal priority for both countries. The sources admit that the text is instead "weak on the industrial side", after all Italy and France are "competitors and their respective divergent national interests". Better the part on the need to pool European resources for innovation and technological development.

In any case, the Elysée stressed, in a reference to what appeared in our press in recent days, "it is absolutely false that the treaty aims to strengthen France's predatory attitude on the Italian economy". Rather "complementarity successes" have been listed, represented by the examples Stellantis and Stmicroelectronics.

As for the comparison with the 1963 Elysée Treaty between France and Germany and the updated Aachen Treaty of 2019, the differences by Rome and Paris are deliberately underlined. "It is useless to pursue history", says an Italian source, referring to the Franco-German agreement, rather urging "to put in place" a Treaty also between Rome and Berlin. Which, as pointed out by ISPI president Giampiero Massolo, would complete that Italy-France-Germany triangle on which to build a "stronger" European Union.

Tomorrow's signature of the Treaty, "an absolute first for Italy, which has rediscovered ambition and initiative in Europe", commented again by the Elysée, can also be read as "a victory over Italian nationalists who have a Risorgimento vision of the relationship with France ", comments Jean Pierre Darnis, professor of Franco-Italian relations at the Cote d'Azur University of Nice and of contemporary history at Luiss. "Given the premises - he says in a reference to the 'brakes' put in during the work on the text by various 'anti-French' circles - one could fear that it was only a symbolic document. And instead it is an ambitious text, it defines a road map. on various French and Italian sectoral policies ".

It is a "historic" treaty, echoes Sandro Gozi, MEP of Renew Europe, which is being signed in a phase in which "the interests of the two countries have never been so convergent". And that will make the difference in relations between Rome and Paris, but also in Europe. Launched at the bilateral summit in September 2017, while the Libyan and Stx-Fincantieri dossiers stirred relations between the two countries, the Treaty aims to strengthen cooperation in the field of foreign policy, European affairs, defense and security. the creation of a Franco-Italian Youth Council, an economic ministerial forum,a cross-border cooperation committee as well as mobility programs for artists and the Franco-Italian civic service already announced during Mattarella's state visit to Paris in July.