The day after the death of at least 27 migrants in a shipwreck off Calais, some 300 activists and residents gathered on Thursday to pay tribute to them. 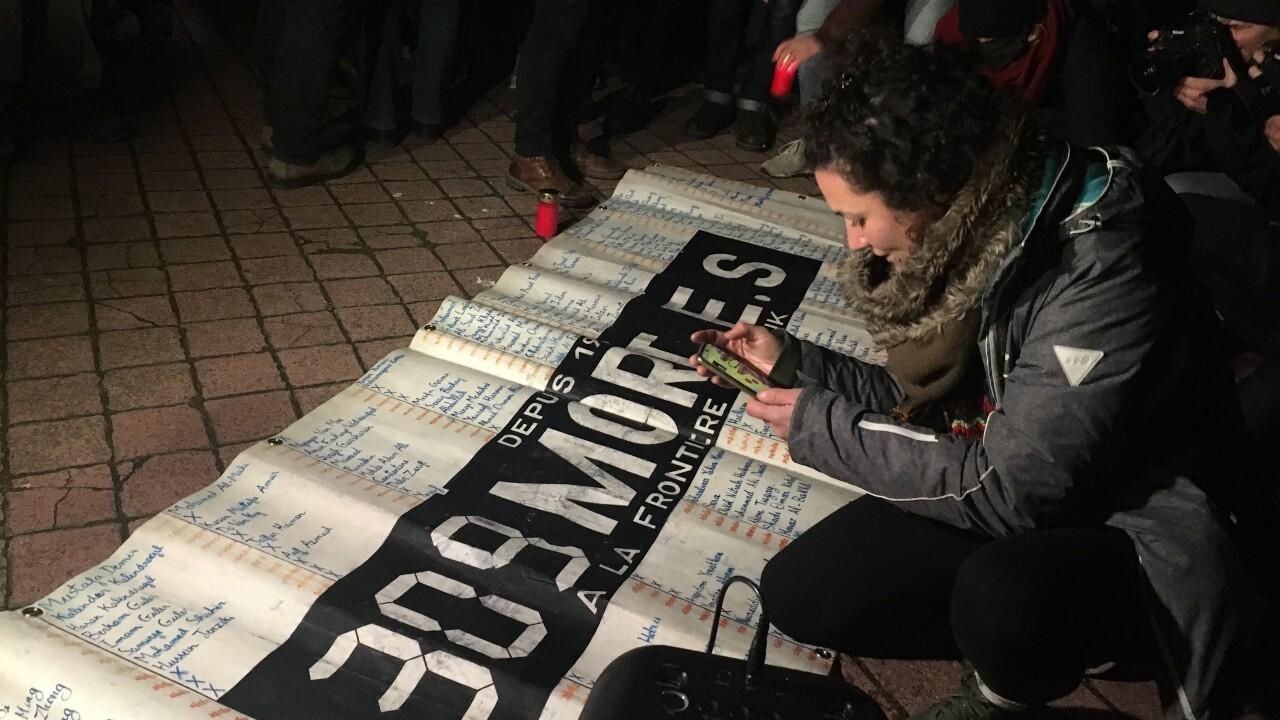 "It must not be started again. I appeal to the president: stop stop stop!".

At the microphone, an activist from Calais who lives near the port describes the "incessant broom of hearses" which she witnessed, until late on the night of Wednesday, November 24, during which 27 bodies of migrants who died at sea after the sinking of their the boat were recovered by the emergency services.

In front of her, in silence, nearly 300 people, Calaisians, activists and migrants gathered, Thursday, November 25, in front of a Calais park for a vigil in tribute to the migrants who died the day before.

"We call that the 'circles of silence'. Usually, there are 30 to 50 people. Tonight there are a lot of people, because there were a lot of deaths", explains Pascal Lefèvre, activist of La France insoumise. in Calais.

"There have never been so many deaths at once. It is the most dramatic migrant shipwreck that we have known," laments Nathanaël Caillaux, project manager at Secours Catholique, also present.

"We are in shock and anger," he continues.

On the ground, a long banner unrolls the names of more than 300 migrants who have died trying to cross the border between France and England since 1999. "Electrocuted by a Eurotunnel catenary, drowned in the Channel, died from lack of 'medical assistance… ", an activist lists the circumstances of their disappearance. "A consequence of the increased militarization of the border and the fight against the presence of exiles," she said.

L'Auberge des migrants, Secours Catholique, Utopia 56… At the microphone, associations follow one another and call on France and the United Kingdom to react by creating a "safe passage" for migrants wishing to seek asylum from the other Channel side.

They also call not to forget the living and to provide survivors with moral support and financial support for the repatriation of bodies.

"We had just buried someone yesterday morning"

For Mariam Guerey, permanent at Secours Catholique de Calais, this shipwreck is unheard of. "We hung a black veil at the entrance to our day care center in Calais," says the one who has been helping migrants for nearly 20 years. "Wakes and funerals. We've only been doing that since September. Every fortnight," she laments. "We had just buried someone yesterday morning: a young Sudanese who died two weeks ago. The burial could not take place before because we had difficulty identifying his body."

She hopes this time that the identification will be faster, but above all that it will be possible, because this is not always the case.

"Their families should have the right to know what happened to them. I put myself in the shoes of mothers who are waiting for news of their children. It should not end like this."

Among the victims of the shipwreck on Wednesday are 17 men, seven women including a pregnant woman, and three young people.

Their bodies were repatriated to the Lille forensic institute to be autopsied and identified.

The circumstances of their death are still unclear.

Left Dunkirk on Wednesday to cross the Channel, was their boat, a "long boat", a fragile inflatable boat with a flexible bottom, struck by a container ship?

Did the inflatable boat deflate?

More and more used by smugglers, these "long boats" which can measure up to 10 meters in length but do not withstand either overload or rough seas.

However, the often difficult weather conditions on the English Channel make navigation difficult, especially since it is one of the most frequented maritime areas in the world, with around 600 ships passing through each day, the rescuers have been alerting for several years. at sea.

"I will try whatever it costs me"

"It's been two years since the passage by sea is used in a massive way, we expected a tragedy", explains Nathanaël Caillaux. Attempts to cross the Channel on board small boats have doubled in the past three months, according to the prefecture. As of 20 November, 31,500 migrants had left the coasts since the start of the year and 7,800 migrants had been rescued.

Accompanied by his French partner to show his support for the refugees, Amir, a 30-year-old Afghan present during the tribute, remembers his passage to England by truck 16 years ago. "I went to England, where I received a bad reception. I finally decided to come back to France," said this inhabitant of a neighboring town of Calais. “At the time, nobody was going to sea, but the situation got worse for the refugees, in their country - in Iran, in Afghanistan - and here. You see, tonight it is very cold, winter is approaching and they have no choice but to attempt the crossing. "

The succession of tragedies discourages some all the same. Faisal, a Sudanese who arrived in Calais two weeks ago, has decided to give up his passage to England. "I'm going to ask for asylum in France," says the thirty-something. "There are too many deaths, too many sad stories. I didn't know those who died, but they were like us. They slept outside." Beside him, a younger friend attempted a crossing yesterday Wednesday. "It was my second time. The engine broke and the police surprised us. I am not afraid and I will try again. I will try whatever it costs me," said the young man age 22 who prefers to remain anonymous.

He is not the only one.

Last night, some 70 migrants attempted the crossing before being rescued.

Some were found freezing cold at the Calais SNCF station, then taken to safety in an emergency.