Activities also open in the yellow-orange area for the vaccinated. In the afternoon, the CDM: the decree law with the new measures to combat Covid is awaited&nbsp; 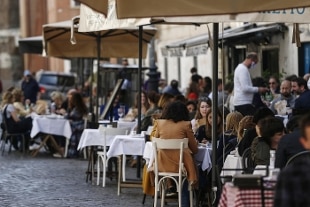 November 24, 2021 Green pass valid for 9 months, and from December 15 the education, defense and security sectors are obliged to vaccinate. These are some of the measures that will be proposed in the CDM and that have been decided in the control room. The

super green pass will also be valid in the white area, but not for workplaces

. Meanwhile, the time limit of the green pass is reduced to 9 months. The third dose of vaccine will be possible 5 months after the previous administration. From 15 December, a third dose is required for healthcare personnel and RSA.

The control room also decided to increase and strengthen controls by the police forces. Among the other hypotheses on the table also the extension of the 3G green pass (ie also with buffer) to regional and inter-regional transport. It is evaluated for urban transport but the decision could be problematic due to the controls. Finally, the 3G green pass for long-distance trains remains.

Activities open even if the yellow and orange zones will trigger but access is allowed only to those with the super green pass, i.e. vaccinated or cured of Covid. This is what the hypothesis of the new decree provides, which should be approved by the Council of Ministers. A squeeze therefore for those not vaccinated by Covid, who will be denied access to bars, restaurants, hotels and gyms.

Buffer valid only for work

From 6 December, the swab will be valid only for going to work, for essential services or for long-distance travel, for the rest the Super Green pass will also be valid in the white area, so for those not vaccinated or cured of Covid it will be banned. access to all the activities for which access is now required with the Green pass, from indoor restaurants to gyms.

The terms of validity of anti Covid tampons should not change. This is the orientation that emerged during the control room in progress between the Prime Minister Mario Draghi and the heads of delegation of the parties that support the Government. The hypothesis was to foresee a reduction from 72 to 48 hours for the duration of the molecular buffer and from 48 to 24 for the antigenic, but at present it would have been set aside.

No vaccine obligation and no green pass for under 12

The anti Covid vaccine, even if Ema's okay arrives tomorrow, will not be mandatory for under 12s. This is the line that emerged during the control room. Similarly, it is reported that the green pass will not be compulsory for children under the age of 12. The theme, it is underlined, is not on the agenda.

In the afternoon the Council of Ministers

The Council of Ministers is convened in the afternoon at Palazzo Chigi.

This was announced by the Presidency of the Council.

The agenda will be communicated later but the law decree is expected with the new measures to combat Covid and the use of the Green Pass.