Clear in Germany: Cannabis is legalized

A kind of "Systembolaget för cannabis" in the EU's largest country - it seems to be a result of the change of power in Germany. Calculations already exist for how many tens of billions a legalization would draw into the state treasury in Berlin. 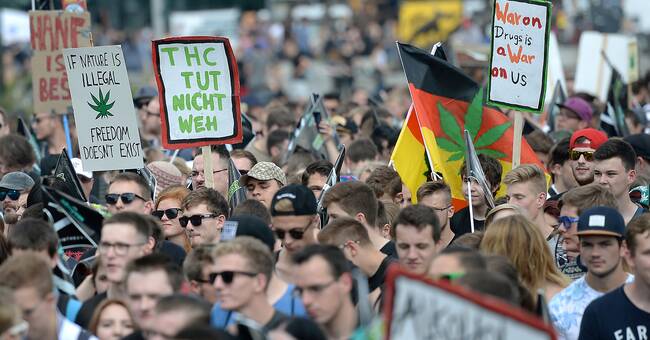 The Social Democrats (SPD), the Liberal Freedom Democrats (FDP) and the Greens have all previously signaled that they want to ease the rules regarding the use of hashish and marijuana.

And in the agreement to form Germany's new government, they state that the drug is legalized.

The plan is to switch to treating cannabis much like alcohol - the substance must be regulated, but within clear limits, both sales and possession and use must be permitted.

As a result, the EU is going further than any other country in the Union.

In the Netherlands, for example, the drug is banned, and the so-called "coffee shops" where it can be bought are only an exception in the law.

There are equivalents in the world to the system that Germany is planning, but very few.

Most famous are probably Uruguay and Canada.

The arguments put forward by the new German government are similar to those that preceded legalization in Canada in 2018: Protect users by ensuring that supply and quality can be controlled and that in the long run it is unsustainable to criminalize millions of consumers.

A certainly welcome consequence will also be that the black economy weakens while the German treasury strengthens.

The journal Der Spiegel cites a study from the Heinrich Heine University in Düsseldorf, which estimates that the sum of savings and extra income would be 4.7 billion euros (48 billion kronor) per year.

There will thus be a huge expansion of the open hashish and marijuana market in the world.

Germany has twice the population of Canada and more than 20 times Uruguay.

The question is whether the Germans, by virtue of the size of the country, can ease a problem that the former legalizing countries suffer from - that there are few legal producers of the drug.

In Canada, unexpectedly few cannabis stores have opened, which is explained by the fact that they have difficulty finding raw materials.

This in turn means that the black market, which dominates the world at large, continues to be a problem there as well.

Public health for the eyes

In Denmark, for example, there is legal cultivation of cannabis for medical use.

The question is whether these growers can now look forward to a much broader market.

As in the case of Denmark with medical cannabis, the German parties emphasize that legalization should be seen as an attempt.

After four years, the situation will be analyzed to determine the continuation.

The three German parties also assure that they will always have public health in mind in drug policy.

"We continuously assess the rules in the light of new scientific findings, and take measures for health protection based on it," a working group has formulated it, writes German media.