The former Chinese tennis star accused former Vice Premier Zhang Gaoli of sexual abuse. There has been no news of her for weeks 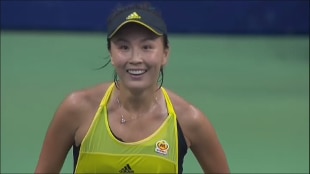 November 23, 2021 - Chinese Foreign Ministry spokesman Zhao Lijian said the case of tennis player Peng Shuai is being "blown" to attack China. After stating that this is not a "diplomatic issue", the Beijing government is forced to intervene directly on the story of the famous athlete, who disappeared from circulation three weeks ago after accusing former vice premier Zhang of sexual assault. Gaoli.

In recent days, the Chinese media have released videos that show that Peng is free and healthy. The champion then appeared on Sunday during a videoconference with the president of the International Olympic Committee, Thomas Bach, seeking to provide reassurance on her current condition. An attempt that did not, however, serve to totally unravel the doubts about his fate.

However, the international community and sports institutions did not consider the tennis player's subsequent video call with the president of the International Olympic Committee, Thomas Bach, to be reassuring either.

"I believe that some people should stop deliberately and hostile inflating this story, not to mention politicizing it," said Zhao when asked about the impact of the case on China's international image.

In addition to many world tennis stars, from Chris Evert to Novak Djokovic, several Western countries, including France, the United States and the United Kingdom, have invited Beijing to shed light on the fate of Peng Shuai.

China tries to bury the Peng Shuai case with the blessing of the International Olympic Committee (CIO): this is the accusation launched by Le Monde after the video call on Sunday between the Chinese tennis star and Thomas Bach. Peng told the latter to "feel good" but also asked for respect for privacy.

Peng Shuai disappeared from circulation for more than two weeks after accusing former Vice Premier Zhang Gaoli, a powerful former Communist Party official 40 years her senior, of forcing her to have sex during a discontinuous relationship that lasted several years.

In recent days, international pressure has increased on Beijing to provide information on the health conditions of the tennis player. The French newspaper raises doubts about the real condition in which the 35-year-old former world double number one is found: "Nothing tells us that she is free" .

According to Human Rights Watch, the conversation between Bach and Peng was conducted under "coercion".

"The IOC is complicit in the propaganda machine and in a case of coercion and enforced disappearance by the Chinese government," tweeted an activist of the organization.

Le Monde notes that the statement released by the IOC after the interview between Bach and the athlete is "particularly light", adding that the Committee, "which is preparing to organize the Winter Olympic Games in Beijing next February, did not mention the accusations. of rape aimed at Gaoli ".

"According to the IOC, everything is fine for Peng Shuai and it is better to leave her alone", continues the newspaper. The New York Times also highlighted that Peng was joined by a "friend" during the video call, to help her express yourself in English.

But the tennis player "speaks fluently after playing for 15 years on the international circuit", observes Le Monde, underlining that "in the past China has often staged forced confessions of dissidents, intellectuals or torpedoed executives".

"It is from the beginning of the story that the IOC has stood out for its complacency with Beijing", concludes the French journalist, observing that, "on the contrary, the association of tennis players, the WTA, has decided to stand up to the China, even if it risks losing important proceeds with the approximately ten tournaments organized in the country and the related TV rights ".

Peng's appearances in recent days "are enough to eliminate worries," tweeted the director of the Global Times newspaper, Hu Xijin, who announced last Saturday that the tennis player would appear in public.

In recent days, government-related media have spread several videos and images of the tennis player on Twitter who on November 2 denounced sexual abuse.

However, the story continues to be completely censored by Chinese media and social networks, and even the live signal of some international networks such as CNN fades when its reporters start talking about the case, the same broadcaster denounced on its web page. The Chinese Foreign Ministry insists that the case "is not a diplomatic issue".