"Politics must stop cutting and pasting in the pension system"

The Left Party's demand for a higher guarantee pension is unfair, according to the pensioners' organizations. They warn that people who have worked all their lives risk being overshadowed. - All the fees that the assistant nurse or care assistant has paid in all the years would mean less in comparison with those who have never worked, says Jan Andersson, vice chairman of PRO. 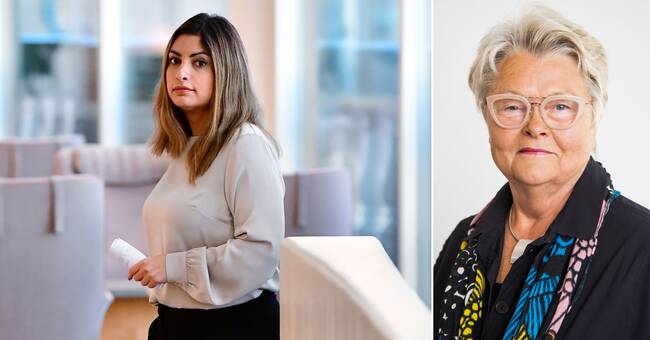 The Left Party wants to see more money in the wallet for those with a guarantee pension - that is, the very lowest pensions.

They are ready to overthrow Magdalena Andersson (S) in Wednesday's prime ministerial vote if an agreement on the issue is not reached, according to party leader Nooshi Dadgostar:

- If we do not have a settlement, we will vote red, she says.

Jan Andersson, vice chairman of PRO, is skeptical of the proposal.

- It is not something that we in PRO prioritize, he says.

PRO: Increase the income pension for those who have worked

An increase in the guarantee pension would mean an increase for the most disadvantaged pensioners.

But it would also mean that the difference between, for example, a care assistant or an assistant nurse who has worked between 30-40 years and those who have never worked will be smaller.

- And we see that as the big problem.

Therefore, we want to increase the income pension for those who have worked and have low pensions.

The guarantee pension was increased a few years ago and the income pension has not been increased, says Andersson.

He does not mind raising the guaranteed pension - but in that case wants to see it in combination with the income pension also being raised.

- That is the most important thing.

So that those who have paid in contributions will be able to see it in their pension envelope, says Andersson.

- Otherwise it will be unfair, she says.

- Politics must stop cutting and pasting in the pension system.

They must sit down and look at how the outside world and our Nordic neighbors are doing.

It does not have to mean that you break up the current system completely, but you have to look at the whole and take action.

Andersson: It's in a hurry

The Social Democrats' party leader Magdalena Andersson writes in a Facebook post that the party shares V's goal of better economic conditions for the most disadvantaged pensioners.

"However, we have not reached the end of the negotiations," Andersson writes.

The vote in the Riksdag will take place on Wednesday.

Andersson states that she will now devote the remaining time to working to reach an agreement with the Left Party.

"If there is a will, I am convinced that it is possible to strengthen the economy for the pensioners who are in the worst situation in a way that does not make it impossible to form a government.

But it is clear that it is in a hurry ", she writes.