China News Service, Seoul, November 18th (Reporter Liu Xu) On the morning of the 18th local time, the Korean University Entrance Examination (College Entrance Examination) for the 2022 academic year was opened as scheduled in 86 examination areas across Korea. Korean media reported that 509,821 people signed up for the exam this year, an increase of 3.3% year-on-year.   This is the second colle 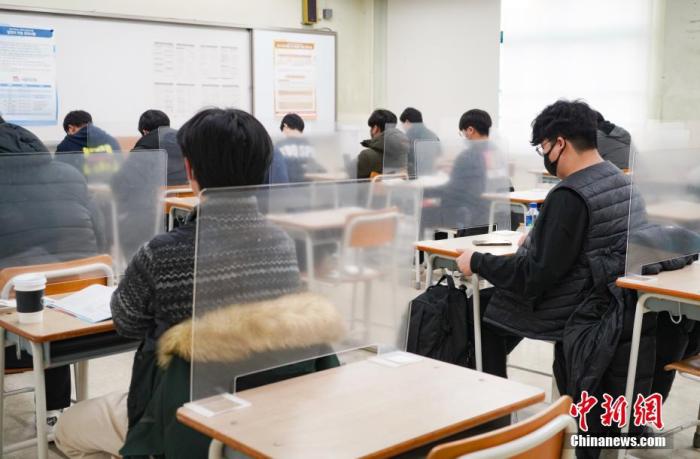 Korean media reported that 509,821 people signed up for the exam this year, an increase of 3.3% year-on-year.

This is the second college entrance examination that South Korea has ushered in during the epidemic.

According to the report of the Korean Central Anti-epidemic Countermeasures Headquarters on the 18th, as of 0:00 that day, South Korea had 3,292 new confirmed cases of new coronary pneumonia compared with the previous day, and the number of new cases in a single day increased by 105 compared with the previous day, a record in South Korea on January 20 last year. The highest record since the outbreak of the new crown epidemic.

Data map: South Korea's college entrance examination, in a certain test center in Seoul, there are partitions on the test table.

Before entering the exam room, all candidates must take their temperature and confirm that they have no doubt symptoms. They must wear a mask throughout the exam.

There are 1251 general examination rooms across the country. Candidates who develop symptoms such as a body temperature of more than 37.5℃ on the day of the examination will be arranged to take the examination in a separate classroom.

Like last year, students who have undergone home quarantine and those who have been diagnosed can also take the test.

According to statistics from the Ministry of Education of South Korea, as of midnight local time on the 16th, 101 candidates were diagnosed with the new crown virus, and 105 are under quarantine.

Among them, 68 people are determined to take the college entrance examination.

At 7:15 that morning, the reporter came to Seoul Ewha Girls’ High School, which is the No. 19 examination room in the 15th examination area in South Korea.

There are several police officers outside the examination room to maintain traffic order, and a slogan saying "Ask for a bright future for all examinees who work hard" is hung at the entrance of the school.

A citizen told a reporter from China News Agency that due to the college entrance examination that day, many companies postponed their arrival time to ensure that the roads near the test site are unobstructed.

At around 7:30, parents successively accompanied the candidates to the school gate.

At 8:05, the reporter saw at Jingfu High School in Exam Area No. 15 in Examination Area No. 15 that there were still some candidates rushing into the examination room, including those who arrived on police motorcycles.

Reporters and parents at the school gate cheered on the candidates.

At 8:30, the school staff closed the gate and unlocked it, waiting for the examination to officially begin.

At the gate of Jingfu High School, enthusiastic people set up a tea stand to prepare hot drinks for parents and media reporters.

Some people told reporters that the Korean college entrance examination has a tradition of support. Not only parents will come to send the exams, but in the past years, there will also be students outside the examination room to support them, using maltose and other support materials to bless the candidates "sticky" (meaning "on the list") However, due to the impact of the new crown epidemic, there have been no large-scale support activities this year, and the number of parents sending exams has also decreased.

Enthusiastic people said, "Although they can't come to the scene as usual, but everyone's expectations and blessings for college entrance examination candidates have not changed, and I hope they can achieve ideal results." (End)