Green Pass strengthened to 'reward the vaccinated'. Regions push, but the government holds back

The regions fear important economic repercussions, which is why they converge on restrictions that do not affect those who have undergone the vaccine. The hope is in the third doses - which reached 3.3 million in Italy - but the virus could accelerate. Walter Ricciardi, consultant to Minister Speranza proposes to "tighten the measures for the issuance of the green pass" and now the comparison between regions and the government is necessary to outline a common line 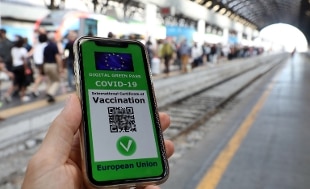 use of the 'strengthened' green pass

back at the center

, i.e. a pass only for vaccinated people and for recreational activities operating in regions that will change color.

Austria and Germany, overwhelmed by the fourth wave of Covid-19, have already introduced the so-called

: geimpft (vaccinated) and genesen (cured). That is, the green pass is only for those who are vaccinated or recovered from Covid and not for those who take a negative swab. A way to incentivize vaccinations and introduce restrictions - still soft in yellow, but heavy in orange - that do not affect those who have undergone immunization.

The world of work would remain unchanged, with the green certificate issued to vaccinated, cured and those with a negative swab.

are trying to gather consensus

. Support for the position of the presidents came today to the secretary of the Pd Enrico Letta.

Palazzo Chigi continues to slow down on the hypothesis of tightening

, backed by still reassuring data on intensive care and ordinary hospitalizations, even if the infections have exceeded ten thousand, reaching the

levels of May. At first, the executive seems to be studying a

provision on the obligation of the third dose

"Each additional person who gets vaccinated is a stronger shield than we have," said Health Minister Roberto Speranza.

While the CEI attacks the no vax, protagonists of "irresponsible protests and against the Gospel for a misunderstood affirmation of freedom and rights". The

De Luca (Campania) proposes "Napalm or the flamethrower", but it's not time to joke.

Among the hypotheses under consideration would be

to allow recreational activities to those who are vaccinated

, despite the change in color of the region, exceeding the limit of four people at the table in restaurants.

This measure would apply to the yellow area, but also to the orange area where restrictions are severe, with curfews, restaurants open only for take-away and the closure of ski resorts.