A British newspaper said that British-American submarines are racing against time "against the Russians" to find what military experts describe as one of the biggest military secrets in the world. 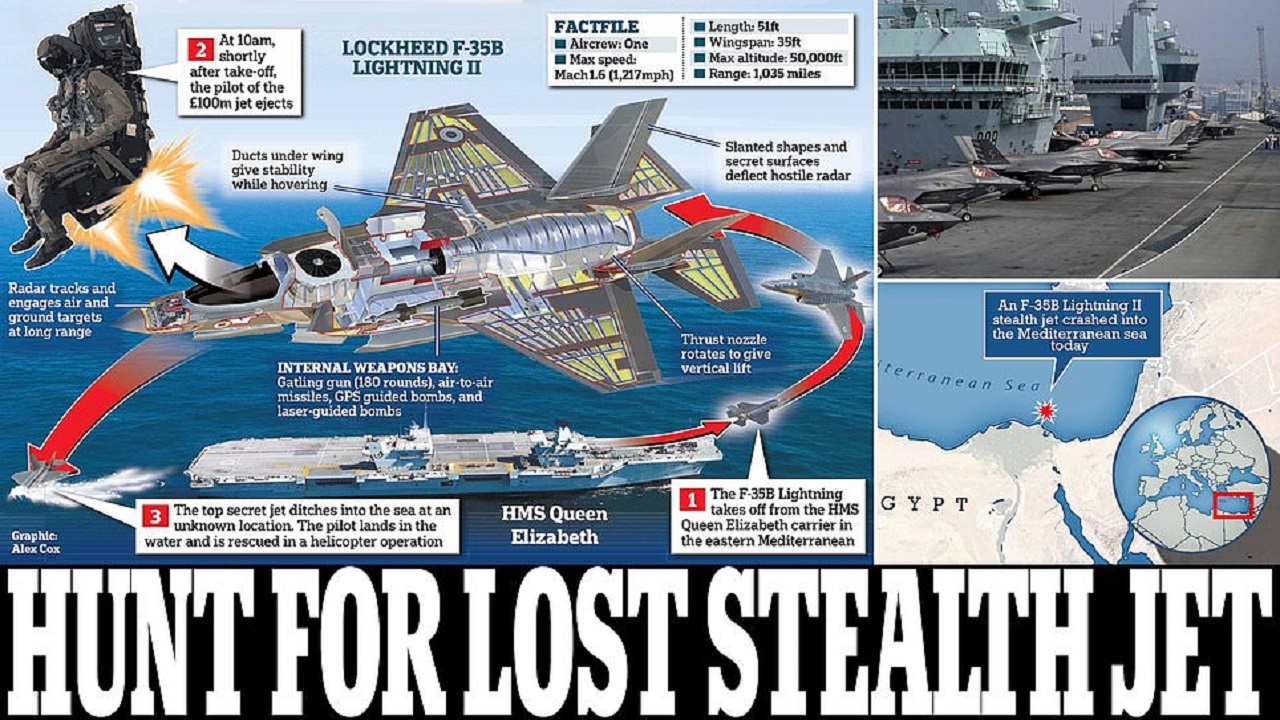 British-American submarines are racing against time "against the Russians" to find what military experts describe as one of the world's biggest military secrets, a British newspaper said.

The sources indicated that British Royal Navy submarines are engaged in what they described as a "race against the Russians" to recover the wreckage of an F-35 plane, worth 100 million pounds (more than 134 million dollars), equipped with "top secret technology" from the bottom of the Mediterranean Sea, specifically near the Mediterranean Sea. From the Egyptian Sinai.

According to the British newspaper, “Daily Mail”, a British Royal Air Force pilot was forced to leave his F-35B Lightning aircraft, when it fell into the water shortly after take-off in a “routine exercise” from the aircraft carrier. for the British Navy "HMS Queen Elizabeth".

The sources noted that the crashed plane is one of Britain's eight fast jets of this category on the British aircraft carrier, in addition to 10 American planes.

The magazine claimed a "scramble" (between divers and submarines) to find a "next-generation fighter" from the sea floor before Russia could reach it.

The British newspaper noted that "it is believed that it is the first time that an F-35 plane has crashed in such an area", that is, in the waters of the Mediterranean near Egypt.

The magazine noted that the technology on board the US-designed fighter, including its highly classified and highly sensitive radars and sensors, allows the fighter to fly "invisible" in normal areas at supersonic speeds.

And the newspaper noted that despite the confidentiality of the information, "it is possible that China already knows everything there is to know about the plane because of the spying operations."

The newspaper indicated that the location of the plane had already been located yesterday, Wednesday afternoon, and an Anglo-American security team is managing the site at the seabed until the plane is raised to the surface, in a secret operation that includes "divers and small submarines."

The sources confirmed that the fighter is the most advanced and costly weapon in Britain, as the plane can land vertically and needs a relatively short runway to take off.

The F-35 crash is the first for Britain and the RAF fleet to lose a fighter of this class.

The magazine touched on the fighter's previous record, as the plane crash raised new questions about the efficiency of the "F-35", of which Britain currently owns 24 of them.

It is also scheduled to buy 138 new ones from the American aviation giant, Lockheed Martin, for 9.1 billion pounds (more than 12.2 billion dollars) in the coming years, and 48 of them are expected to be delivered by 2025.

In 2018, an American pilot was forced to leave the F-35 fighter jet after takeoff, as it crashed in South Carolina during a training exercise.

And last year, an F-35B fighter jet also crashed near California after colliding with a small plane.