(A closer look at China) Xi Jinping and Biden "face-to-face", China and the United States will solve "must-answer questions"   China News Service, Beijing, November 16 (Reporter Huang Yuqin and Li Jingze) Chinese President Xi Jinping held a video meeting with US President Biden on the morning of the 16th. The two heads of state discussed strategic, overall, and fundamental issues related to the d 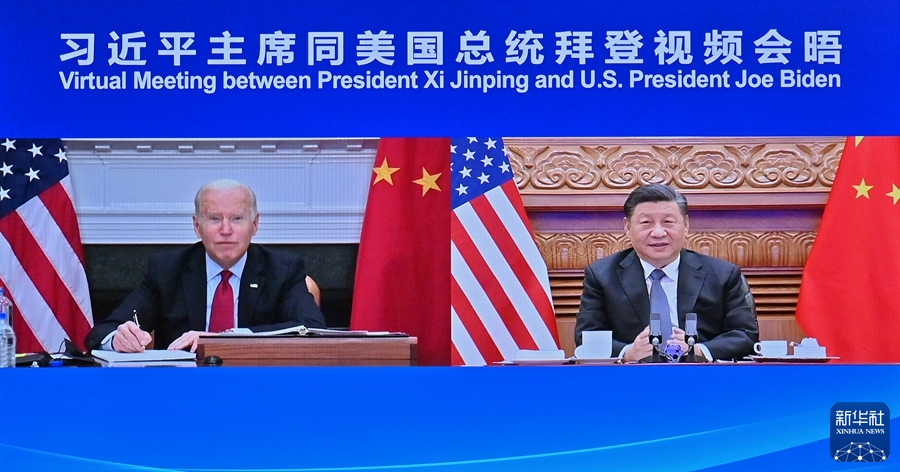 (A closer look at China) Xi Jinping and Biden "face-to-face", China and the United States will solve "must-answer questions"

China News Service, Beijing, November 16 (Reporter Huang Yuqin and Li Jingze) Chinese President Xi Jinping held a video meeting with US President Biden on the morning of the 16th. The two heads of state discussed strategic, overall, and fundamental issues related to the development of Sino-US relations. Full and in-depth communication and exchanges have been conducted on important issues of common concern, and the "must-answer question" on how to do a good job in Sino-US relations has ushered in the latest answer.

This is the first video meeting between the two heads of state in the history of Sino-US relations.

Since the beginning of this year, the first two communications between the heads of state of China and the United States have been conducted by telephone.

The video meeting on the 16th was the first "face-to-face" interaction between the heads of state of the two countries.

"From listening to them to meeting each other, the exchanges between the two heads of state are more direct, reflecting the desire of both sides to strengthen communication." Ruan Zongze, executive vice president of the China Institute of International Studies, pointed out, "How to improve Sino-US relations in solving problems? In the process, the strategic leading role of the two heads of state is crucial. The direct communication between the two sides through face-to-face means will set the tone and direction for the next development of the relationship between the two countries."

During the meeting, Xi Jinping used the ship as a metaphor to point out the key role of the two heads of state in steering the bilateral relationship. "Bump", and emphasized that "history is fair, and a politician's actions, whether merits or demerits, must be recorded in history."

This video meeting provided new ideas for this "must-answer question" on how to do a good job in Sino-US relations.

Analysts believe that the "three-point principle" and "four priorities" put forward by Xi Jinping during the meeting will point the way for Sino-US relations at a critical stage to get back on track.

"Compared with the new Sino-US relationship between major powers, the'Three-Point Principle' has both consistent adherence and development in accordance with the times and circumstances." Wang Dong, Executive Director of Peking University's Research Base for Sino-foreign Humanities Exchanges, analyzed, "Non-conflict, no confrontation, is The bottom line of the two big countries, and peaceful coexistence emphasizes the inclusiveness of the relationship between the two sides."

The "four priorities" refer to: show the responsibility of major powers and lead the international community to cope with outstanding challenges; in the spirit of equality and mutual benefit, promote exchanges at all levels and in various fields, and inject more positive energy into Sino-US relations; manage and control in a constructive way Disagreements and sensitive issues, to prevent Sino-US relations from derailing and getting out of control; to strengthen coordination and cooperation on major international and regional hotspot issues, and to provide the world with more public products.

When discussing the above-mentioned priorities in detail, Xi Jinping focused on advancing China-US constructive cooperation without evading the differences between the two sides, emphasizing "constructive management and control" and "avoiding expansion and intensification."

This approach is in sharp contrast with the so-called "rule of thirds" of "cooperation, competition, and confrontation" proposed by the United States to handle Sino-US relations and differences.

"The so-called'rule of thirds' points to three contradictory directions, which will continue to pull Sino-US relations towards confrontation." Dong Chunling, an associate researcher at the Institute of American Studies of the China Institute of Modern International Relations, pointed out that China emphasizes on the basis of "reserving differences." More "seeking common ground" will play a more active role in promoting bilateral relations.

As a big country with completely different history, culture, and political systems, Sino-US relations are intricate and complicated, and it is not realistic to successfully solve the "must-answer questions" and hope that they can be "achieved overnight."

From the outside, clarifying each other’s development strategic intentions is the key to clarifying the problem.

During the meeting, from the initial mission of the ruling party to China’s concept of peace, from the state policy of opening to the outside world to the persistence of China’s values, Xi Jinping introduced China’s development path and strategic intentions in detail, including clearly expressed "requirements" and clear plans. The red line and the bottom line are "don't".

Regarding the most important and sensitive Taiwan issue in Sino-U.S. relations, Xi Jinping expounded China’s principled position, emphasizing that the one-China principle and the three Sino-U.S. joint communiqués are the political basis of Sino-U.S. relations. If the separatist forces of "Taiwan independence" provoked and persecuted, they would even To break the red line, we will have to take drastic measures.

Ruan Zongze analyzed that in the face of misunderstandings and misjudgments from the outside world, China's interpretation of development paths and strategic intentions will play a role in enhancing trust and dispelling doubts in the development of bilateral relations.

On issues involving China’s sovereignty and territorial integrity, China’s timely clearing of the bottom line of principles is not only necessary for the development of the situation, but also an important way to manage differences and crises and prevent Sino-US relations from becoming confrontational.

More importantly, as the world's two largest economies, answering the "must-answer questions" between China and the United States is not only related to the two countries, but also of global significance.

During the meeting, Xi Jinping pointed out that the most important thing in international relations in the next 50 years is that China and the United States must find the right way to get along.

Recently, the joint declaration issued by China and the United States during the United Nations Climate Change Conference (COP26) in Glasgow demonstrates the importance and necessity of cooperation between the two countries in the face of global challenges.

Wang Dong analyzed and pointed out that from energy security to climate change to public health security, China specifically talked about areas where China and the United States can strengthen cooperation in the future, and thinking about the responsibilities and obligations that both parties need to assume from the perspective of the interests of all mankind will serve the global order. Inject rare certainty with the pattern.

"In the world of major changes unseen in a century, the strategic choices of China and the United States have a vane significance for the world and are an important driving force for shaping the changes." Ruan Zongze pointed out that solving the "must-answer questions" between China and the United States will promote a century of change. Development in a favorable direction throughout the world will not only benefit the people of the two countries, but also meet the general expectations of the international community.