US President Joe Biden and China's counterpart Xi Jinping held a virtual summit on Tuesday night. "It is important that both countries respect each other, we need a stable relationship," said Xi Jinping. 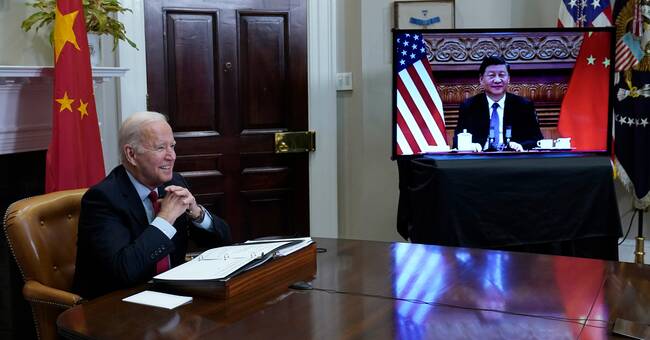 US media report on a friendly and diplomatic meeting between the presidents of the great powers, Joe Biden and Xi Jinping.

"I'm glad to see you old friend," Jinping told Biden as they waved to each other via their computer screens.

- Maybe I should start more formally, even if you and I have never been formal with each other, Biden replied and added:

- We have always talked to each other honestly and neither of us has left wondering what the other is thinking, reports AP.

Joe Biden highlighted the responsibility of both leaders to ensure that countries' competition does not escalate into conflict, whether intentional or unintentional.

Something that even Chinese President Xi Jinping took note of.

- Both countries should become better at communicating and cooperating, Jinping stated and continued.

- A stable and reciprocal relationship is necessary to deal with global challenges such as climate change and covid-19.

People live in a global village and we face challenges together, Jinping said.

No major agreements are expected

Before the meeting, China's officials feared that Taiwan would be the main issue - as tensions escalated as the Chinese military increased its presence in Taiwan.

"The Taiwan issue concerns China's sovereignty and territorial integrity. It is the most important and sensitive issue in China-US relations," a spokesman for the Chinese Foreign Ministry said in a statement before the meeting, Reuters reports.

In addition to the sensitive issue of Taiwan, the two presidents are also expected to discuss cyber security, customs and North Korea.

Tonight's meeting is the third between the presidents since Joe Biden took office in January.