Upcoming Libyan elections.. Where does Egypt stand? And what are its interests? (Question and Answer)

In this report, Al Jazeera Net monitors a set of questions related to the Egyptian position on the Libyan developments, and where does Cairo stand in them? And what are its interests? and with who? Are Haftar and Saleh still her preferred and most important option? 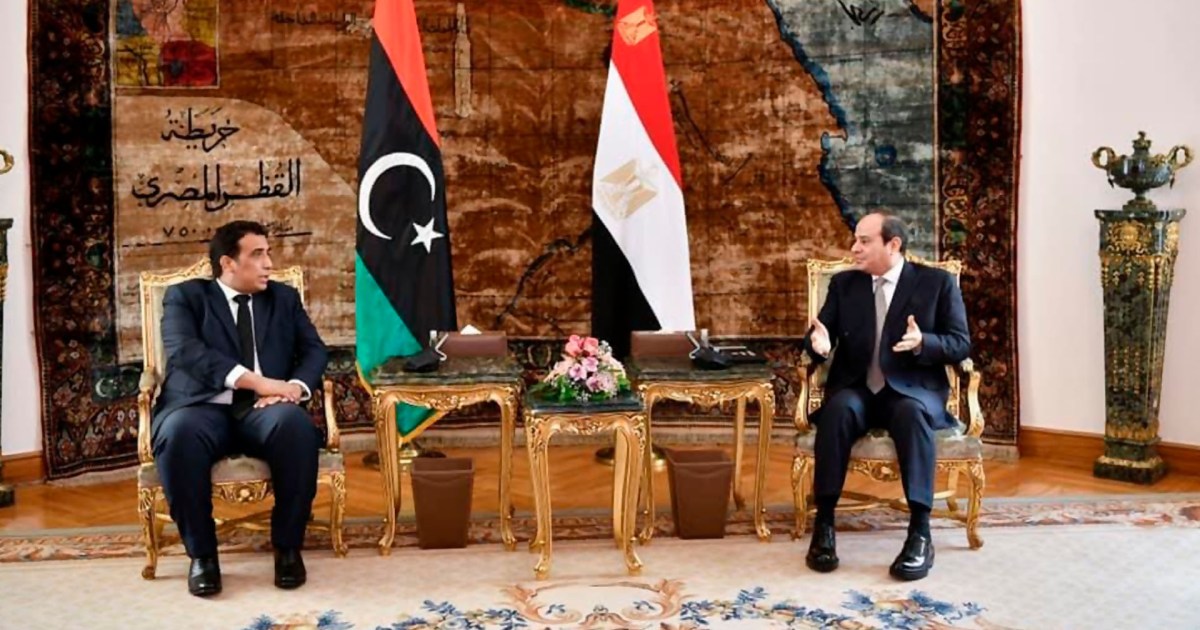 “Oh grandchildren of Omar Al-Mukhtar, the time has come for you to be inspired by the determination of your ancestors who sacrificed the most precious for freedom and the independence of the national decision, and to pronounce from your country every foreigner and intruder, no matter how much you sing that in his presence is good for you; the good is in your hands if you transcend your differences and resolve to Build your country with a free Libyan will, and you will find Egypt a support and strength whenever you need it, in support of your security, your choices and your ambitions.

With these words, Egyptian President Abdel Fattah El-Sisi, during his speech at the Paris conference on Libya, outlined his country's position on resuming the political peace process in Libya.

With the Libyan elections approaching at the end of this year, Cairo is looking cautiously at a group of local actors and regional and international players in its western neighborhood, which represents an extension of its national and geostrategic security.

In this context, Al Jazeera Net monitors a set of questions related to the Egyptian position on the Libyan developments, and where does Cairo stand in them?

And what are its interests?

Is her preferred and most important option still the retired Major General Khalifa Haftar and the Speaker of the Libyan Parliament, Aqila Saleh?

How did the Egyptian deal with the Libyan file change?

It is known in advance that Egypt was and still is the most prominent supporter of Haftar and Saleh, and it saw the former as the ideal candidate to restore stability, protect its strategic interests, and avoid direct and costly intervention in Libya.

But the failure of Haftar’s military campaign during the past two years prompted Cairo to reconsider its plans, bet on marketing the political track, commit to holding elections on time, and stress the need for foreign forces to leave. It also seemed more open to the Tripoli government, and reopened its embassy there. Cooperation and reconstruction agreements.

These Egyptian transformations were intertwined with other regional players. On the one hand, Egypt distanced itself from the unlimited alliance with the UAE in supporting Haftar's option, and on the other hand, it seemed more open to the return of relations with Turkey, although the Libyan file represents so far one of the most prominent dilemmas of rapprochement between the two countries. In addition to the Egyptian efforts to appear more moderate in order to avoid entering into possible crises with the US administration.

The Ministry of Manpower announces the signing of an electronic link protocol with #Libya to facilitate and regulate the entry of Egyptian workers to it pic.twitter.com/yUcXcwNHL7

Where does Egypt stand from the Libyan elections?

And what are its interests?

Egyptian academic and political analyst Khairy Omar saw that Sisi's speech at the Paris conference represents a general framework for the Egyptian solution to the Libyan crisis, explaining - in statements to Al Jazeera Net - that Cairo stands with the elections and confirms their date, and if circumstances lead to its postponement, it is with the political solution as a first and basic requirement.

And the Egyptian researcher specializing in Libyan affairs, Alaa Farouk, picked up the same thread, indicating that Cairo now stands with the political settlement, and with the international community in its movement to hold the elections on time as stipulated in the road map, stressing - in statements to Al Jazeera - that Egypt, even if it hopes for a particular faction to win, In the elections, they will not line up with him, at the behest or international advice.

Why the Egyptian insistence on holding the elections on time and removing the foreign forces?

Commenting on this, Omar stressed that it is not actually an Egyptian insistence, but rather a support for the international position to hold the elections on time. As for foreign forces, the file of mercenaries and foreign elements was on the table of the recent Egyptian-Turkish talks, and there was an Egyptian proposal to freeze the security agreement between Ankara and Tripoli until the arrival of an elected government, which is a flexible position from Cairo.

He added that Cairo sees the foreign presence - in general - in Libya as a direct threat to its national security, noting that the Russian presence may be more concerned for Egypt than its Turkish counterpart;

Since the interests of Cairo and Moscow do not converge along the line, even if the two sides support Haftar, who is also problematic for Egypt, as it does not seem that he is still able to guarantee its interests in Libya.

Farouk largely agreed with the previous proposal, pointing out that the Egyptian insistence on holding the elections on time represents an Egyptian goal that Cairo wants to prove to the international community that it is on track with the settlement, and that the new faces in the Libyan authority may be more open to Egypt and achieve its interests.

Although the current Libyan authority (the Presidential Council and the government) - according to Farouk - is more open to Cairo than the previous Government of National Accord, Egypt wants more openness, integration and interests with political faces that may forget the past.

Another important indication that researcher Farouk touched is that Cairo may want to wash its hands of the wrong reading that it was following, when it was supporting and adopting Haftar and defending his project at one stage, and thus it is now trying to evade this matter completely by supporting the elections and expelling mercenaries. .

Between Haftar, Saleh and others.. Which one is better for Cairo?

Omar believes that Aqila Saleh - as a presidential candidate - is among the Egyptian choices, but Egypt will not limit its options and put its cards behind one candidate.

But overall - according to Omar - the electoral map in Libya has not yet been completed, and there is a possibility that the elections will be postponed, and therefore no country will be able to determine its position on supporting one of the candidates.

He added that the issue of categorizing candidates based on the division of the Libyan regions is a complex matter, and may weaken with progress in electoral practice, and the elections will require a kind of entanglement and alliances - local and regional - whose features have not yet appeared.

On the other hand, Farouk believed that Haftar or Aqeela are not the most important option for Cairo at present;

Her choice remains a president that all Libyans can agree to, and a government that can deal with it.

The researcher in the Libyan affairs stressed that Egypt, at least during this period, will not bet on a personal project or even a faction or a particular region, and that there is no specific candidate that it prefers so far.

How does Egypt invest the prospective government to support its interests?

Although Libya's political prospects remain unclear, recent reconstruction deals between Cairo and Tripoli are a sign of efforts to re-engage with the Libyan West after years of siding with Haftar.

In this regard, Omar believes that Egypt established agreements with the Tripoli government and opened up to the elite in the West;

Because building policies and interests is always based on consensus, and if it is absent, interests will collapse quickly, and Egypt always says that it is an ally of Libya, and that it does not prefer interfering in the internal affairs of countries.

On the other hand, the successive Libyan governments, including the Sarraj government and the parties in western Libya - according to Omar - have always emphasized their keenness that relations with Cairo would not reach a critical point that is difficult to reverse.

However, researcher Alaa Farouk goes on to say that the reconstruction deals represent an Egyptian attempt to impose a fait accompli, so that no future government finds any escape from linking with Egypt by implementing and benefiting from these agreements.

He also considered that Egypt is trying to support its interests by communicating with those who achieve these interests, by naturally re-normalizing relations with the Libyan West where the government is located, which is difficult to reduce to its geographical location;

Being the seat of the state government.

How was the Egyptian presence in the Paris conference?

Omar believes that the conference that concluded last Friday in the French capital was not promising or strong in general, and the Egyptian momentum in its presence was to balance the French role in Libya, as Paris adopts a vision that does not converge with many aspects of Egyptian interests.

He stressed that the Egyptian presence was not supposed to be intense at the level of the president, foreign affairs and intelligence officials;

Because it is one of the least powerful conferences in support of the Libyan file and Egyptian interests, including the Berlin conference months ago.

He explained that the Egyptian interests do not converge with the French interests in Libya, as Paris does not want to establish the elections, and there was a possibility to increase the French manipulation of their time range.

On the other hand, Farouk considered that the conference was very important, especially with the international forces dealing with the momentum of the Egyptian presence, and Cairo's assurances of the necessity of holding the elections on time, removing mercenaries and foreign forces, and supporting the new authorities in their movements.

Farouk attributed the Egyptian presence to the Paris conference to being a clear message and confirmation that Egypt is now not entrenched behind a single faction such as Haftar or the Libyan East in general.