Critical associations and NGOs. Wwf: "Text far from perfect". Greenpeace: "It's a weak agreement and it lacks courage" 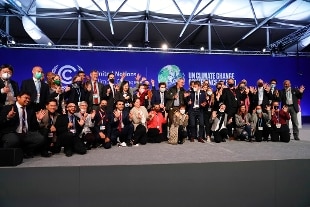 November 14, 2021 The COP26 in Glasgow closes with an agreement on the international commitment against the climate emergency, but weakened by the final blitz of India, blessed by China, on coal. In the 'Glasgow climate pact', however, the commitment to keep the global average temperature increase within +1.5 degrees as the maximum threshold at the end of the century, even if "dented", remains "alive". In general, the final agreement remains a commitment to emission cuts of 45% by 2030 on 2010 levels, aiming for net zero emissions around the middle of the century, a formula considered by many to be too vague.

The commitments of the various countries gathered at the summit in Scotland, however, according to the most optimistic estimates allow a +1.8 degrees and according to the most severe, such as those of the Climate Action Tracker, a +2.4 degrees (always if the commitments are At COP21 in Paris, of which COP26 aimed to "write the rules", in 2015 it was decided to stay "within +2 degrees aiming for +1.5 degrees".

There is still a lot to do, and all 197 countries gathered have agreed to meet next year at a negotiating table to review their national plans - Nationally determined contributions. 'children' of the Paris Agreement of 6 years ago - with the intention of increasing their ambition. The positive difference is that the COP21 agreement provided for a review every 5 years, that of 2020 was skipped due to a pandemic, the next one should have taken place in 2025, instead it will take place in 2022. The

The lack of clear commitments for the $ 100 billion a year fund to the most vulnerable countries to be established by 2020, decided at the Cop15 of 2009 and confirmed by the Paris Agreement of the Cop21 of 2015, weighs heavily. ministerial meetings. Also criticized, especially by the most fragile countries, is the failure to agree on a 'loss and damage' fund to help the poorest countries cope with the consequences of climate change. From this point of view, there has been a compromise for an annual "dialogue" between now and 2024 on how to reach an agreement.

No agreement was reached on a stop to coal

The agreement on the stop to coal was not reached: in fact, when the agreement was put to the vote in the plenary, for the necessary unanimous ok of the 197 countries gathered, there was the 'coup' of India that with a a last-minute intervention asked and obtained, after the expiry of the time, to change the text from "coal phase out", ie abandonment, to "coal phase down", ie reduction, due to the discouragement of Alok Sharma, president of Cop26.

Positive agreement between China and the United States

Positive, however, the surprise agreement, and of great strategic value, between China and the United States, with the envoy from Beijing Xie Zenhua who declared that he wanted to collaborate with Washington "to deal with an emergency that puts our own at risk. existence "and that of the Biden John Kerry administration which while acknowledging that with the Asian giant" there are differences "underlines how" we must act in the same direction on the climate ".

Also good are the agreements on stopping deforestation by 2030, on the commitment of 105 countries (but without China, Russia and Australia) to reduce methane emissions by 30% by 2030 and on the stop to investments in fossil fuels at abroad. Commitments that will be verified at COP27 in Sharm el Sheik in Egypt next year. Strange as it may seem, a significant result of the agreement is the explicit mention of the need to intervene on "ineffective fossil fuels", since in the Paris Agreement the terms "coal", "oil", "gas" and "fuels" fossils "were not explicitly mentioned.

The agreement reached then resolved some outstanding technical problems that had hitherto prevented the entry into force of some aspects of the 2015 Paris Agreement (Article 6) relating to the carbon market and the "transparency" of monitoring and communication by emission countries and on the buying and selling of emission quotas from the most virtuous states. "We can say - declared Alok Sharma, president of Cop26 - with credibility that we have kept the limit of +1.5 degrees alive but his pulse is weak and he will survive only if we keep our promises and translate the commitments into quick actions" .

Cingolani: "Compromise is part of the job"

"It is not a watered-down compromise, we had to bring the whole world on board, more than 195 countries, with an agreement that was to keep the bar at +1.5 degrees global warming and not at +2 degrees", said the minister. the Ecological Transition, Roberto Cingolani, to Rainews24, "India and China have basically vetoed, they have asked for a lightening of a condition that, I can guarantee, is quite marginal, but this has allowed us to have them on board in the Cop which now has sanctioned the rules of transparency and implementation for what we will do in the coming years ". Having said that, "I am not very satisfied", he added, but "I realize that with these dimensions at these levels, unfortunately compromise is part of the job. Here it is not a question of technique, but of diplomacy".

In Glasgow, the world came together for our planet and people to finalise the Paris Agreement.

Countries at # COP26 increased their ambition and took real #ClimateAction.

With the Glasgow Climate Pact, 1.5 is within reach. # TogetherForOurPlanet pic.twitter.com/kVePvbwQsk

For the WWF, Cop26 ended "with weak decisions in a number of important areas, including adaptation, the so-called Loss and Damage (losses and damage) and climate finance "but" in the text there are significant holds that countries can exploit to increase their climate ambitions in the short term and to implement binding climate policies ". However, the agreement "for the first time mentions subsidies to fossil fuels in an approved final text", acknowledges the Panda association, and "this is an important element, as is the recognition of the need to accelerate investments in clean energy. , while ensuring a just

Greenpeace: "It's a weak agreement and lacks courage"

According to Jennifer Morgan, executive director of Greenpeace International, the Glasgow agreement "is a weak agreement and lacks courage. The goal of limiting global warming to within the threshold of 1, 5 degrees hangs by a thread but a clear signal has been given: the coal era is winding down and this matters. While the need to drastically cut emissions already in this decade is recognized, commitments have been postponed. to next year. Young people who have grown up with the climate crisis will not be able to tolerate further postponements. Why should they when they are fighting for their future? ".

Greta Thunberg: "Cop26 is over. Here is a brief summary Bla, bla, bla"

Greta Thunberg's judgment was severe, as it was easy to imagine: "Cop26 is over. Here is a brief summary: Bla, bla, bla. But the real work continues outside these salons. And we will never, ever give up", wrote on Twitter.

But the real work continues outside these halls.

And we will never give up, ever.