An adélie penguin, which is native to Antarctica, appeared off the coast of New Zealand on Wednesday - almost 3,000 kilometers from home. The rare visitor was spotted by local resident Harry Singh just south of Christchurch in Birdlings Flat, who first thought the animal was a "stuffed animal". 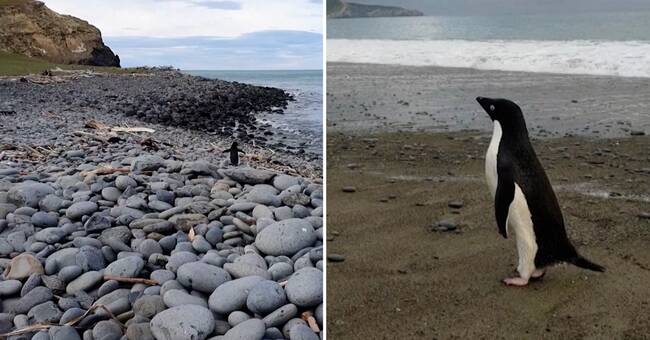 The penguin, which has been named Pingu by the locals, was malnourished and severely dehydrated when it was found.

It has since been given liquid and fed via a probe before being released back into the wild.

How or why Pingu got to New Zealand is unclear but this is not the first time adélie penguins have been seen off the coast of New Zealand.

Zoologist Philip Seddon says that the penguin may have been caught in sea currents that brought it far from home, but does not draw any other conclusions from the rare visit.

- If we start to see adélie penguins arrive every year, we can conclude that something in the sea has changed, he says to The Guardian.

Global warming has had different consequences for penguins in different parts of Antarctica.

In some places the sea ice grows to itself, while in other places it shrinks.

However, Nasa estimates that the population of noble penguins will decrease until the turn of the century.

In New Zealand, the warming of surface water has made it more difficult for local penguins to find food because the fish seek out deeper and colder waters, writes The Guardian.