A new type of drug developed by American scientists facilitates cell regeneration and prevents paralysis in mice with severed spines, allowing them to ... 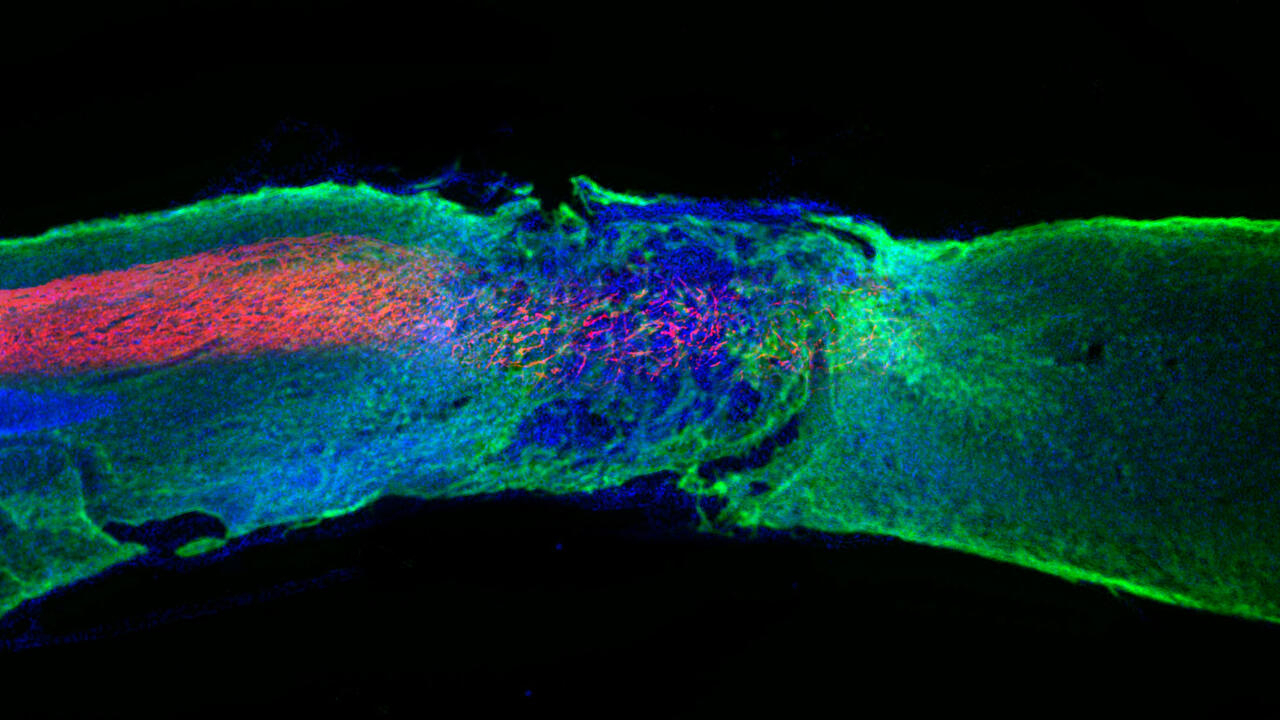 The Northwestern University team that published its research in the journal Science on Thursday hopes to present its treatment as early as next year to the US Medicines Agency, the FDA, to offer trials in humans.

"The objective of our research was to develop a therapy transferable to humans that could be used in hospitals to prevent paralysis in victims of major trauma or suffering from illnesses," Prof. Samuel Stupp told AFP. leads the study.

Curing paralysis is a long-standing goal of medicine, and other experimental treatments are currently under study.

The one experimented by Samuel Stupp uses nanofibers to mimic the structure of the "extracellular matrix", a network of molecules that naturally develops around cell tissue.

Each nanofiber, which is 10,000 times thinner than a hair, is made up of hundreds of thousands of molecules called peptides, which transmit signals to help regenerate nerves.

The therapy, which comes in gel form, was injected into the tissues surrounding the spinal cord of lab mice 24 hours after their spines were severed.

The researchers decided to wait 24 hours because humans who have suffered spinal injuries from car crashes, gunshot wounds, or other traumas usually don't get treatment right away.

Four weeks later, the mice that received the treatment were doing almost as well as before the injury.

Those who did not receive the treatment did not work.

The mice were then dissected to examine the impact of the therapy at the cellular level, and the researchers saw dramatic improvement in the spinal cord of those who received the treatment.

Severed extensions of neurons, called axons, had regenerated and scar tissue, which can be an obstacle to regeneration, was very reduced.

In addition, a protective layer of axons important for transmitting electrical signals had reformed, blood vessels that supply nutrients to injured cells had developed, and more motor neurons had survived.

One of the key findings of the researchers was that when subjected to a certain mutation, the collective movements of cells were intensified and their efficiency improved.

That's because receptors in neurons are naturally in constant motion, explains Samuel Stupp, and making the therapeutic molecules within nanofibers "dance" helps connect them to their moving targets.

The researchers tested two versions of the treatment, one with the mutation and one without, and found that the mice that received the modified version recovered more mobility.

The gel developed by this team of researchers is the first of its kind, but it could lead to a new generation of drugs called "supramolecular", composed of an assembly of molecules and not of a single molecule, adds Stupp.

According to the researcher, the drug is safe because the materials break down in a matter of weeks and become nutrients for the cells.

He hopes to move quickly to testing on humans without the need for testing on other animals, such as primates, explaining that mammals have nervous systems that are poorly differentiated between species.

"There is currently no treatment for spinal cord injury, and it's a huge problem," he says.

According to official figures, 300,000 people live in the United States with a spinal cord injury.

Their life expectancy is lower than that of the rest of the population and no progress has been made since the 1980s.

"The question is how the US Medicines Agency will approach these therapies, because they are totally new," concludes Samuel Stupp.