Attacks of November 13: "I would do exactly the same thing today", assures Holland

Called to testify at the bar as a witness at the trial of the attacks of November 13, 2015, François Hollande recounted the night of "horror" he lived, justifying the decisions taken on the evening of… 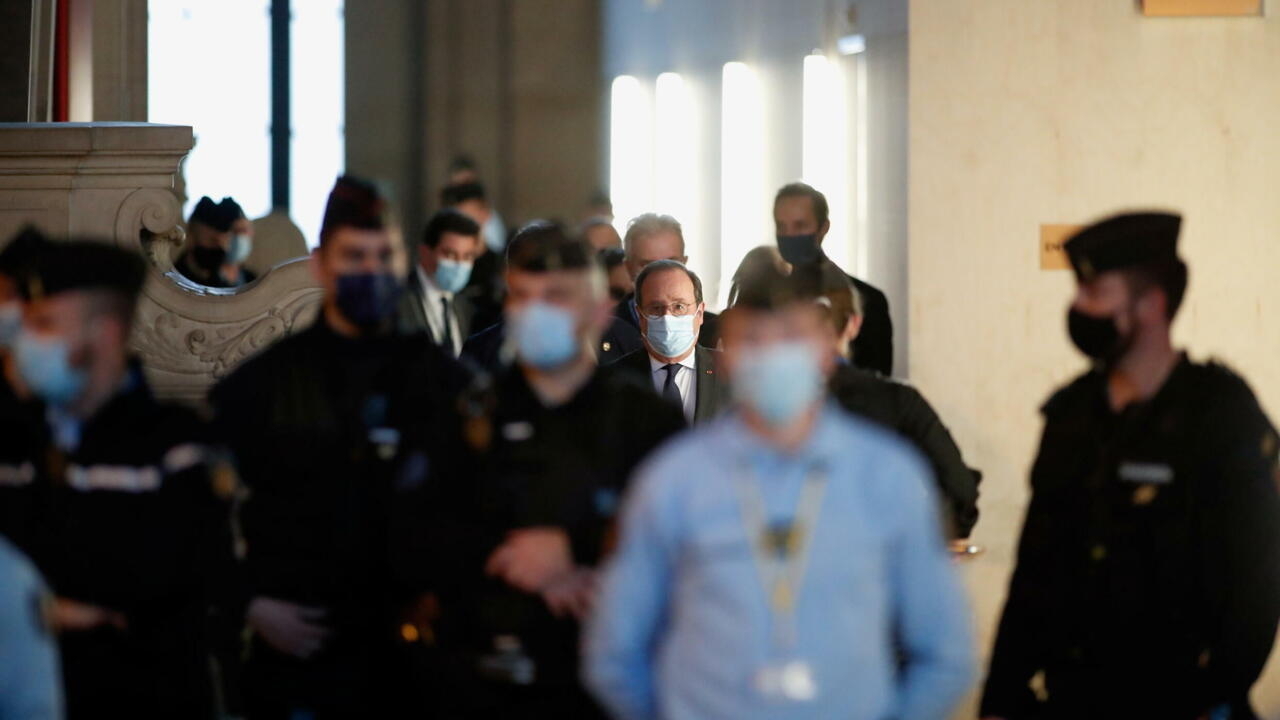 We find the influx of the first days before the special Assize Court of the trial of the attacks of November 13, 2015. The large press awaits on Wednesday November 10 an exceptional witness at the bar: François Hollande.

The former President of the Republic who was in office at the time of the facts, was indeed cited as a witness by the victim association The Life for Paris association.

But even before he arrives, the presence of this exceptional witness is debated. For more than two hours, the defense lawyers and the civil party oppose their arguments with speckled foil on the relevance of his presence at the trial. A large part of the defense indeed deplores a show justice. "What relation to the truth can have sociologists, politicians. The Assize Court becomes a TV set, a university amphitheater", loose Me Violleau, lawyer for Mohamed Abrini. "We just want it to be a trial, that's all", not "a commemorative ceremony and a platform", nor "a show", stormed Me Martin Méchin. "I read this morning 'this is the first time that a president has come to testify in front of an assize court'. Great!But what will that bring us? "

The name of François Hollande in the debates

However, since the opening of the debates on September 8, the shadow of the former president continues to interfere in the debates.

Especially from the box, where Salah Abdeslam, the only surviving member of the commandos, justified the jihadist attacks of November 13, 2015 in retaliation for the foreign policy of France and its then president.

"François Hollande knew the risks he was taking by attacking the Islamic State in Syria," he said on the sixth day of the trial.

His name could also be heard cited by suspected terrorists in the recordings broadcast during the Bataclan concert.

From the point of view of the public prosecutor, "it is premature to answer before having heard these testimonies", declared the general counsel Camille Hennetier, opposing the request. "François Hollande is a normal witness", ironically Me Martin Vettes, lawyer for Salah Abdeslam, an amused reference to the "normal" presidency that François Hollande wanted to give to his mandate.

After more than an hour and a half of deliberation, the court finally announces the rejection of the requests which oppose his testimony.

As a witness to the explosions at the Stade de France and sponsor of the operations that followed the attacks, President Hollande has his place at the trial.

Dark suit, blue tie on white shirt, François Hollande then enters the room of a crowded and silent audience.

"Hello Mr. President, said Jean-Louis Périès." Hello Mr. President, "François Hollande retorts with a smile, provoking the hilarity of the auction room where the journalists follow the retransmission of the debates on video. brief moment of lightness that cuts through the martial atmosphere of the moment to follow.

François Hollande: "If I had to do it again, I would do everything the same again"

Daesh hit us "for what we stood for"

François Hollande then begins the story of his evening, text previously written on a sheet of paper.

"I am present to bear witness to what my role was on that fatal night of November 13. This testimony I owe to all those who have lost a loved one and who want to understand, yes, to understand. I know the suffering that they tested in court. This pseudo-state group struck us not for what we did but for what we represented: a country which cherishes culture, which loves sport. Not for our mode of action abroad, but for our way of life. Democracy will always be stronger than barbarism ".

To read: With the other survivors of November 13, "we have become members of a battered family"

After this introductory statement, President Jean-Louis Périès opens the ball of questions. "How did you experience this evening?" The former socialist president begins the story of this "horror" evening. "I hadn't planned to go there, but when I found out that the German Foreign Minister was there, I decided to go. When the first detonation sounded, the players were are arrested, surprised, I realized that it could be an attack. At the second explosion, I no longer had any doubts. The head of my security warned me that there was already a dead man I waited a few minutes then I went to the security HQ I make the decision that the match must continue and that everything must be done to avoid panic.I return to the gallery and ask the German minister and the President of the National Assembly to stay. I join the Minister of the Interior in the security cell. "

"We didn't know where, when or how they were going to hit us"

Then François Hollande recounts in detail that night during which he joined the crisis unit of the Ministry of the Interior and summons the Council of Ministers to declare a state of emergency. Then come the many questions from the lawyers of the civil party relating to the arrest of Abaoud, the bombing of Raqqa, the establishment of the state of emergency, the threats that hung over the country ... , the president affirms that "there was a threat in 2009 of an antisemitic order on the Bataclan but it was not followed, I specify that I was not president on that date." Then the president admits, "There is bound to be failure when there is an attack. But all the DGSE and DGSI services did everything they could.[…] We did all we could to prevent these attacks and even track terrorists back to their land. But we had no knowledge of the preparations for this attack. "

Regarding the French intervention in Syria, the president assures us that "we owe it to the populations who are slaughtered. The greatest victims of Islamist terrorism: they are the Muslims".

The terrorists' objective was to "destabilize our country, to create a fracture, a rupture of one against the other".

The President believes that his role has been "to preserve national unity like a block, a rock that nothing can chip away from us."

Patrick Jardin, father of a victim at the Bataclan, admits not having learned much after the testimony of François Hollande at the trial.

Without ever really deviating from his humor, the President also submits to many questions from lawyers that are not strictly factual. François Hollande responds in particular to the decisions he has taken, but emphasizes that often others, prosecutors, soldiers or other officials have had to decide on operations directly. "Some presidents before me have tended to want to be a police officer instead of the police, prosecutor instead of prosecutors, not me," he replies with a smile alluding to his predecessor Nicolas Sarkozy.

The irony amuses the assembly.

But at the adjournment of the hearing, it seems that some civil parties are not sensitive to the legendary humor of the former president.

"We first lost time with the objections of the lawyers and then we lost another two hours with the President's wacky explanations during which we learned nothing, laments Patrick Jardin, father of a Bataclan victim. The only thing that emerges is that he was irreproachable. Responsible but not guilty "in short.