Today's debate among finance ministers on the revision of EU rules on public budgets was "a good start", but "we must work hard to build consensus on the proposals that we will put on the table in the first half of next year" 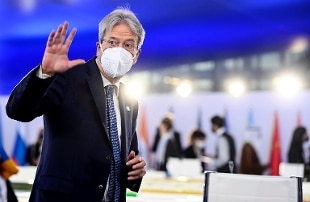 09 November 2021 "It is very clear to us that the green transition is not the source of the problem but it could be, in the medium term, the solution. At the same time we know that if we do not address what happens with energy prices and we do not guarantee a just transition, we risk having obstacles on the way to a new climate context ", said the European Commissioner for Economy, Paolo Gentiloni, upon his arrival at the Ecofin meeting in Brussels.

"It is very important that Member States react quickly, as they are doing, to rising energy prices and at the same time we will discuss possible joint initiatives to tackle this problem at European level," he added.

"There is awareness that we have this high level, we have to find ways to realistically reduce this level of debt. But as we say, we have to do it in a way that is friendly towards growth. It is not easy, it is necessary to find a consensus on the table. how to do it. But there is widespread awareness that it is a problem to be addressed ", added the European Commissioner for Economy. "Reaching a consensus on the fiscal and economic framework in the post-Covid era is fundamental for the future of the euro, but also for the EU as a whole".

"Growth in Europe has increased significantly over the past two quarters and confidence remains high. The latest indicators of economic sentiment and employment expectations improved in October and are close to all-time highs," continued Gentiloni.

"We have touched the current headwinds to recovery, of which three stand out in particular. First, the increase in Covid-19 cases in different parts of Europe, especially in areas where vaccinations remain relatively low. Second, disruptions in global supply chains, which affect different sectors, and thus the economies of different Member States, to varying degrees, "he stressed.

"And third, the rise in inflation, which is mainly, but not exclusively, driven by rising energy prices. Our analysis, which I would say widely shared, indicates that these second and third headwinds are largely It is clear that we, as policy makers, will need to remain highly vigilant and ready to adapt our response as the situation evolves, "added Gentiloni.

"I would like to avoid this revision being seen as another chapter in a very long book of debates on the Stability and Growth Pact, in which consolidated positions are affirmed and reaffirmed. I believe instead that it should be seen as the first chapter of a new story, which is about creating the conditions for strong and sustainable growth of the European Union in the post-pandemic area - which by definition must be built on sound public finances.

In the coming months, we have to work hard to build a consensus on the way forward and I think that today we have taken a necessary first step along that road ", said the EU economy commissioner at the end of the Eurogroup.