Juanma Castaño: "Of course I was envious of Ibai Llanos for interviewing Messi" 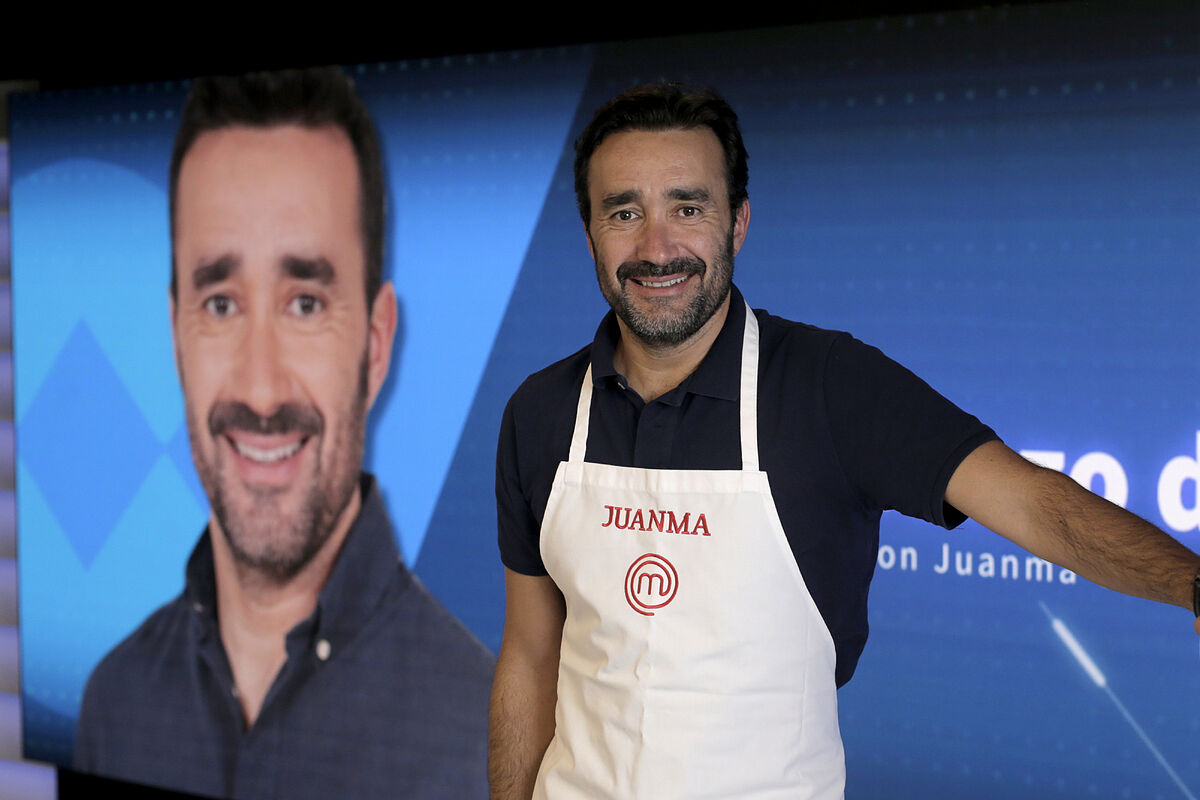 The presenter of 'Cope's great match' has entered the kitchens of 'MasterChef Celebrity'.

Juanma Castaño thought it would last only one week, but it has already been eight.

? It's one of these things that drag you down and, in the end, you say: "What am I doing here?" I did the casting which was a disaster and they caught me. And then I thought: "It doesn't matter because it will be a week." I'm lasting longer than I thought. My goal was to be short-lived. You've accomplished the feat of surpassing the 'lion eats shrimp' with the world's ugliest dessert. I've surpassed everyone in that regard. The next one who wants to make the worst

it is going to be complicated. I defend that ... The taste was good Yes. I know it is very hard to believe and that the appearance was horrible. I knew from the beginning that that was not going to get up. I thought I was going to find support from the judges and it was not like that. They let me die cruelly. At no time did I receive the slightest indication or help to get afloat. We all thought that Verónica Forqué was the sweetest woman on earth and she turned out to be the exorcist's girl. She is the sweetest woman on earth. I defend it. What happens is that at certain times he becomes a difficult person to manage in a kitchen. As for Verónica, the main fear I had is that we worked with dangerous material: pressure cookers, 200-degree ovens, sharp knives ... I was afraid for my physical integrity. Sometimes it drives you crazybut it's just so adorable outside of the kitchen! It is impossible to be angry with her. How many times have you wanted to strangle her? All the times that I have coincided with her cooking. It is something never seen. She is the revelation of

. He is an absolutely overwhelming personality. He has that sweetness when he switches to languages, when he cooks and dishes in his own way. I told the people on the show that there should be a

and another for Verónica Forqué. I'd pay to see her unreleased material on

Why do you hate Micky Nadal? I don't hate him. Hated him. I liked Micky very badly because he had a program on television that gave all sports journalists a lot of wax. It made me uncomfortable having to say hello to him. When we were introduced, to the minute, I thought I liked him great. I laugh with him and he makes me laugh. Is there too much ego in journalism? There is too much ego everywhere. Instagram is a social network that exploits people's ego and everyone wants to appear the most handsome, the happiest and the one who travels the most. Have footballers become increasingly inaccessible to the press? Yes. Sports journalism has been forced to change because all the doors have been closed on us. A game ends and it is almost impossible for us to call a player on the phone to ask him. He already does it on his Instagram or his Twitch or whatever.The other day Javier Tebas stated in your program that journalists were only going to be able to ask what the National Professional Football League authorized. Against the vice of asking is the virtue of not giving. At least in my case, I'm not going to ask what Thebes tells me. And, if they have to kick me out for asking a good question with respect, then kick me out. Luckily, Thebes is not the director of the Cope and I owe myself to the Cope. It surprises me that Tebas says it because when you interview him he never tells you not to ask him this. He does not apply any censorship to himself. We journalists now are scoffed at by anyone for doing our job, which is to ask uncomfortable questions. The problem is that there are viewers and readers who find it wrong that we ask uncomfortable questions when they are the beneficiaries . If there is a Prime Minister,we will demand that he be asked about the rugged issues, because to ask him about the wind in his favor, there are already rallies. It will be necessary to ask the things that do not count in the rallies. Journalism is important. What awkward question would you not like me to ask? Anyone related to my personal life. I think there are barriers in journalism, which is the intimate life of people. I hope with

the barrier is maintained. I am a sports journalist and, when I go out of here to do the shopping, I would not like to have a photographer on my doorstep. Be honest: were you envious of Ibai Llanos for having interviewed Messi? Yes, of course. But Ibai and those who had access to Messi that day. My criticism was that Messi was only with Ibai. We all have to have the right to access the characters. You just said "I don't understand anything" and it got messy on social media. I do not understand that something so soft can have such a level of impact. It scares you a little. Damn, what power do I have! It was not so much what I said, what would you have asked Messi if you had been able to interview him? What if he had been willing to play a free year at Barça.You have confessed that you have a bare ass from being a 'trending topic'.I am every Monday every time it is broadcast

. But it is giving me a more positive image than that of sport, which has very critical and irascible fans.

helps me be a

Real Madrid Before journalists were required to be objective. Now, they have become fans of the teams.As a result of the fact that the interview tap has been closed and the participation of the real protagonists in radio and television programs, gatherings and shows have been created that have generated their own characters . They are often journalists playing the role of fans. It doesn't offend me at all. I see it from an entertainment point of view. I think they have chosen that path and, of course, along the way, they have lost some of their credibility, but they have found their place by playing that role. I am not going to look for information in them, but entertainment, but to find out what happens in a club I do not choose him but another journalist.Do knives fly among radio sports stars? Not anymore. So many flew between García and De la Morena that it is not even fashionable anymore. It is almost impossible that there is war between sports journalists. After that war, they made peace and shook hands. And you think: Was that war worth it? We have handed over the weapons. Sports journalism has totally disarmed. It defines in a few words the following journalists: Manolo Lama. A force of nature. José Ramón de la Morena. Someone who changed the radio. José María García. The one who started it all. Manu Carreño. . [Long silence] You put me in a bind. I don't know how to define Manu. Partner for decades.Josep PedrerolHas known how to find his niche.Paco GonzálezFor me the Messi of the radio.Pepe Domingo CastañoThe legend.What is the hardest moment you have lived on the radio? When I had to announce the death of Enrique Castro, Quini. I opened the program with the president of Sporting, Barça and Vicente del Bosque listening live, I burst into tears and could not continue speaking. Quini was a good friend of mine and he died suddenly. I did not expect it and I had to announce that he had died of a heart attack. It was very hard.