XV of France: the enthusiasm of Flament, the frustration of Ntamack

With the first successful Thibaud Flament, the confirmation of Melvyn Jaminet and the contribution of the replacements, the results are generally positive for the XV of France after the victory against Argentina ... 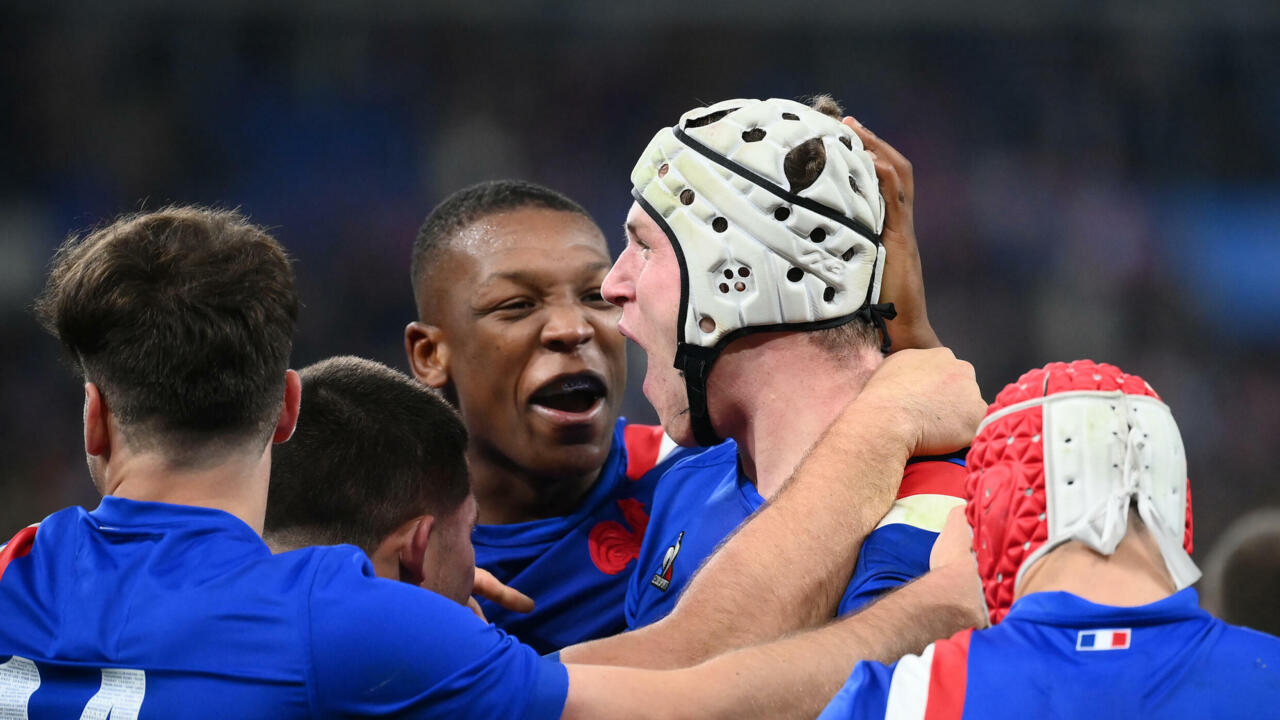 It was the main curiosity of the first of three matches in the fall series.

How would the association work between Ntamack, repositioned in the center, and Matthieu Jalibert dubbed at the opening?

It is clear that the two rivals for the post of N.10 have never really found each other.

If Jalibert made up for his blunder - a countered dismissal that led to the Pumas' first try - by delivering two assists, Ntamack had a bad evening.

The opener of the XV of France Matthieu Jalibert during the Test-match against Argentina on November 6, 2021 at the Stade de France in Saint-Denis FRANCK FIFE AFP

In a different register from Virimi Vakatawa, more powerful but injured, the Toulousain had to bring his qualities of liveliness, manager and his kicking game.

But he could not express himself on the field as the Argentines targeted him, like this tackle in the quarter of an hour of play after a late first pass from Jalibert to his destination.

Ntamack was even replaced by Jonathan Danty, more beefy, before the hour mark and left the lawn scowling.

A disavowal or the recognition that the association with Jalibert did not work?

"We felt that we needed to have more impact, in physical terms," ​​coach Fabien Galthié told a press conference.

The second row with an atypical course has scored a try for its international debut.

But the young player from Toulouse Stadium (24) also managed eleven tackles, the best total for the Blues in this category.

Enough to kick the experienced Bernard Le Roux (32) out of the XV of France for the whole of the November tour?

The hypothesis does not seem impossible.

The pillar of the XV of France Thibaud Flament running towards the in-goal during the Test-match against Argentina at the Stade de France, November 6, 2021 in Saint-Denis Anne-Christine POUJOULAT AFP

Galthié had made a strong choice by dispensing with the fierce second row of Racing 92 to bet on the globetrotter Flament and his double meter (2.03 m for 116 kg).

For his baptism of fire, the former N.10, trained in Belgium then also passed by Argentina (Club Newman) and the English Championship (Wasps), took up the challenge.

At the same time, he took a serious option on a starting place for the duels with Georgia on Saturday and New Zealand on the 20th.

Revelation of the tour in Australia in July, without having played in Top 14, the back of Perpignan did not miss his first international match in France. In his role as a scorer, he scored 19 points (5 successful penalties out of six, 2 conversions). Before scoring their two tries in the second half, the Blues suffered in the face of the aggressiveness of the Pumas and it was Jaminet who allowed them to stay ahead of the score thanks to his accuracy in front of the poles. The young element of Usap (22 years old) did not succeed either, with also a missed drop, a forward before the test refused to Antoine Dupont and an uncontrolled high ball which led to the second Argentine try. But he showed that he was not just a summer hit.

The back of the XV of France Malvyn Jaminet in the Test-match against Argentina on November 6, 2021 at the Stade de France in Saint-Denis FRANCK FIFE AFP

Galthié wanted to densify his bench, one of the weaknesses of his team.

His coaching paid off.

The first line composed of Jean-Baptiste Gros, Peato Mauvaka and Demba Bamba weighed at the end of the match, with a special mention to the Toulouse hooker Mauvaka, author of the second French try.

If Grégory Alldritt, usually holder, was penalized, he also brought his aggressiveness.

The power of Danty, relaying Ntamack, was appreciated as was the speed of Sekou Macalou, replacing Flament.

Conclusion: a successful and controlled end of the match, a great satisfaction after several disappointments in this area.