At Cop26 it is the day of the young. In Piazza Greta leads the Fridays for Future against bla bla bla

In the afternoon, Minister Cingolani will present the document "Youth4Climate Manifesto" Cop26, 23 countries undertake to eliminate coal from energy Cop26. Agreement of 40 countries to reduce the use of coal but without China, India, USA and Australia Cop26, Cingolani: "Italy enters a 10 billion fund for the climate emergency" Cop26, Italy: after 2022, stop to subsidies to fossil fuels that have not been cut down Cop26, the day of finance. For the climate crisis you need 1 trillion do 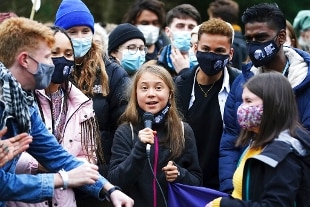 05 November 2021Today's day of Cop26 in Glasgow is dedicated to young people. In the morning, the UNFCCC Youth Committee Youngo will present its Climate Declaration. Youngo's youth will then confront themselves with political leaders and experts. Outside Cop2, at 11:00 local time (12 in Italy) at Kelvingrove Park in Glasgow Greta Thunberg will hold her usual Friday climate strike.

In the afternoon, at 4:00 pm local time (5:00 pm in Italy), the meeting of education ministers is scheduled, which will also be attended by the Italian minister, Patrizio Bianchi, and his colleague from the ecological transition, Roberto Cingolani. At 5.30 pm local time (6.30 pm in Italy) Minister Cingolani will present the document "Youth 4 Climate Manifesto", which contains the results of the Youth4Climate Conference in Milan in September. The young people involved will have the opportunity to discuss their concrete proposals with the ministers participating in COP26.

The march of Greta

After accusing the world's greats of continuing to make vain promises, young people take to the streets in Glasgow to urge them to act. "So far we have heard many words. With these protests we want to put pressure on those in power and we know that this movement must grow to achieve the changes we need to protect people and present and future generations," commented the Ugandan activist Vanessa Nakate.

Inspired by Swedish activist Greta Thunberg, millions of young people took to the streets around the world in 2019 to call on their leaders to take faster and more radical action against global warming.

After the suspension due to the pandemic, the Friday demonstrations are back.

Today in Glasgow is also the day of Greta's Fridays for Future who pointed the finger: "This is no longer a climate conference. It's a greenwashing festival. Two weeks of business celebration and just bla bla bla".

# COP26 has been named the must excluding COP ever.

This is no longer a climate conference.

This is a Global North greenwash festival.

A two week celebration of business as usual and blah blah blah.

He will not march alongside the young activist, Prince Charles, known for his contribution to the fight against climate change, who declined Greta's invitation. His participation is '' difficult '', said the Prince of Wales, adding that he shares the "frustration" of the younger generations. Speaking at COP26, the prince addressed the young people, saying that the "weight of history" weighs on their shoulders. Speaking of the '' great march, which some people think I should join '', Prince Charles told world leaders to '' don't forget the people out there. Don't forget it's their future '', listen to them '' anger and frustration ''.

Also on Saturday there will be climate demonstrations in Glasgow and around the world. "For ten years, storms in the Pacific have been more severe, longer droughts and floods stronger. Fishermen can no longer feed their families. This is what I walk for," says Brianna Fruean, who arrived from Samoa with the Pacific Climate Warriors. "We refuse to be just victims of this crisis. We are not drowning, we are fighting, and on Saturday the world will listen to us."

The 2015 Paris Agreement aims to limit global warming to well below + 2 ° C, if possible + 1.5 ° C, to avoid the worst climate impacts. Each additional tenth of a degree has its share of consequences. But, according to the latest UN estimates, the world is heading towards a "catastrophic" warming of +2, 7 ° C.