The Renaissance Dam and the encroachment of the Tigray... Questions about the Egyptian position on the armed conflict in Ethiopia

While a former Egyptian military stressed that his country is watching the Ethiopian events from the standpoint of the stability of the Horn of Africa, a former diplomat saw that it might be an opportunity to rearrange the papers in a way that would allow more room for movement in the file of the Renaissance Dam. 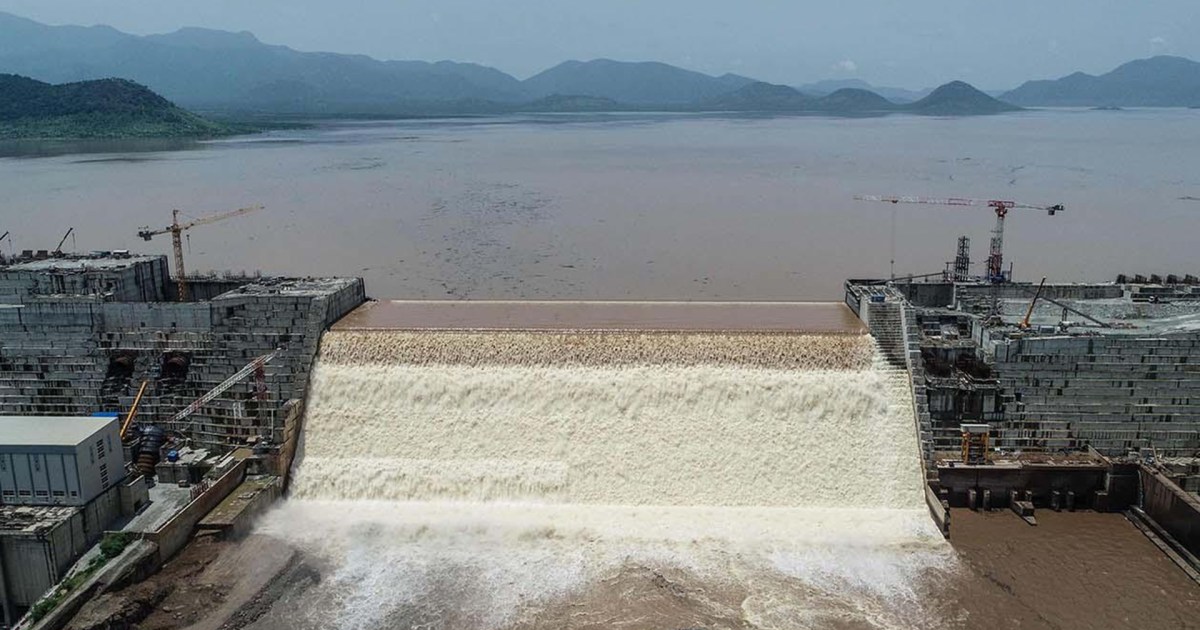 In light of the continuation of the Renaissance Dam crisis, Cairo is closely watching the escalation of the armed conflict in Ethiopia, especially with the announcement of the "Tigray People's Liberation Front" to join the rebel forces in the Oromo region, speaking of its readiness to advance to the capital, Addis Ababa.

The tribal conflict in Ethiopia threatens the stability of the Addis Ababa government;

At a time when questions were raised about the Egyptian position on the current situation, and the impact of these unstable conditions on the file of the dam that Ethiopia continues to build, and Egypt and Sudan fear its negative impact on their share of the Nile waters.

Despite repeated and sometimes almost direct Ethiopian accusations that Cairo is behind the unrest in Tigray and other rebellious regions, Egypt usually denies its interference in the internal affairs of other countries, including Ethiopia, and has not clashed politically with the ongoing conflict there.

There is a contradiction in Egyptian interests regarding the sustainability of the Ethiopian conflict - according to observers - who draw attention to the fact that spreading more chaos in the Egyptian southern depth, may represent the inauguration of new hot spots, creating an additional threat to Egypt after Sinai and Libya, and they also point out the potential fears of the continued exodus of thousands of Ethiopians to Sudan.

While an expert in African affairs and Egyptian national security stressed that his country is watching the Ethiopian events out of concern for the stability and security of the Horn of Africa, excluding its exploitation of the current state of chaos to settle the dam file, a former diplomat saw it as an opportunity to rearrange the papers in a way that allows more room for movement in Other tracks, in contrast to the peaceful negotiation in the tense file since 2011.

Tigray and the Renaissance Dam

In mid-July, Ethiopia announced that it had achieved its goal for the second year in terms of filling the dam reservoir, coinciding with the failure to reach an agreement under the auspices of the African Union, and the Egyptian-Sudanese endeavors to obtain a Security Council resolution that strengthened the position of the two countries, contrary to what appeared recently. Among the harbingers of Ethiopia’s start of the third filling of the dam lake without an agreement with the two downstream countries.

And last Tuesday, the Ethiopian Prime Minister Abi Ahmed said that "non-Ethiopian" elements have joined the Tigrayan fighters and are participating in the battles taking place in different regions in the Amhara region, a statement that comes in the context of multiple official Ethiopian statements accusing foreign parties of seeking to inflame the situation there;

For reasons including targeting the dam.

Last September, the Ethiopian army announced the thwarting of a sabotage operation targeting the dam by the Tigrayans, and this was preceded by statements by the Ethiopian Foreign Ministry spokesman, Dina Mufti, in which he said that the army's exit came within the framework of addressing what he called external threats aimed at obstructing the second filling.

These accusations are usually attributed by observers to being directed at Egypt for considerations of the conflict over the waters of the Nile River, especially since it had previously accused Addis Ababa, Cairo and Khartoum of supporting acts of violence in the Benishangul Gomez region - which hosts the dam - in addition to the announcement of the Ethiopian Information Network Security Agency Many cyber attacks originating from Egypt were thwarted in June 2020, with the aim of disrupting economic and political activities in Ethiopia, while the Egyptian authorities did not respond to these accusations.

In this context, the former Assistant Foreign Minister, Ambassador Mohamed Morsi, believes that the fall of Prime Minister Abi Ahmed would rearrange many papers in Ethiopia and in the East African region, and considered it an opportunity to save Egypt in the dam file.

Morsi explained, on his Facebook page, that this represents an opportunity that allows Egypt to move more on all tracks, not only the negotiating and peaceful track, as well as additional papers that can be used to obtain concessions that are close to the minimum Egyptian demands in the dam file.

For his part, the expert on African affairs and Egyptian national security, Major General Mohamed Abdel Wahed, ruled out any role for Egypt in fueling the conflict, pointing out that it is a conflict of interests in the first place, and has developed into a military conflict between the tribal parties and the Addis Ababa government.

In response to Ethiopian officials' talk about foreign conspiracies targeting their country, Abdel Wahed explained - in statements to Al Jazeera Net - that the Ethiopian army is a regular army, and it has obtained advanced weapons in the recent period, but at the same time it suffered many losses.

He added that the Ethiopian conflict threatens Egypt and Sudan, and that Cairo is closely following these developments because the stability of the Horn of Africa and East Africa, including Ethiopia, has dimensions to Egyptian national security, stressing that his country always calls for regional peace and takes internationalist positions to impose international peace and security.

The security expert pointed out that Egypt had an important role during the presidency of the African Union in implementing the principle of the policy of silencing the guns, which is the 2063 initiative, but it was not completed in the Ethiopian issue;

Because of the complexity and intertwining of the conflict internally with external components, stressing that Egypt does not take advantage of these events to settle the dam file, explaining that his country knows that the Ethiopian government is preoccupied with its war with the Tigray, which may topple the head of power, and may result in a state of chaos and instability.

On the threats of the conflict in Ethiopia to his country, Abdel Wahed indicated that it increases the opportunities for crimes and creates an incubating and fertile environment for terrorism, and the spread of organized crime groups such as drug smuggling, arms and people smuggling and illegal immigration, in light of the presence of large borders between countries, and the fact that the region is tribal, and one tribe spreads in more than one country.

To avoid these fears, the Egyptian expert did not rule out that Cairo would sponsor mediation between the parties to the conflict if Addis Ababa wanted to do so, within the framework of ensuring internal stability and calming the situation, stressing that there are no problems between Cairo and Addis Ababa, but it is only the issue of the dam that Egypt does not reject. However, it stresses the need for binding legal controls, so that it is not misused with bad faith or ignorance.

And in his reading of the official statements of the Addis Ababa government that the conflict with Tigray comes within the framework of addressing external threats targeting the Renaissance Dam?

Are there Egyptian moves to fuel the conflict?

The security expert replied that Addis Ababa had failed in its war against the Tigrays and was trying to throw this at a foreign country or a regional entity that it did not specify;

In order not to anger its people, pointing out that targeting government forces in the rebellious region and controlling military vehicles and aircraft, means that the defect stems from the incompetence of the army, and not the support of a state or an external party to the fighters, he said.

He reinforced his opinion by saying that the analysis of the military situation on the ground indicates that the Tigray region is confined without outlets, explaining that from the north and east it is bordered by Eritrea, and the latter is hostile to the region, and the Ethiopian forces have previously helped in sporadic attacks, and from the west there is the Hamra region, which separates between The region and Sudan, where Ethiopian forces are stationed, to prevent the infiltration of fighters into Sudan.

He added that the Tigray's control of the strategic Hamra region is fraught with danger, given that it is surrounded by 3 Eritrean military teams stationed in the Umm Hajar region, and another Ethiopian in the eastern part of the Afar region.

He predicted that if the Tigrayans took control of the Hamra region, they would make great gains and this would lead to the downfall of the government;

Because it is located in the area of ​​passage of the road and railway between Addis Ababa and Djibouti, a line that feeds Addis Ababa and depends on it for 90% of its economy, he said.

For his part, former Egyptian diplomat Farghaly Taha, former assistant foreign minister, stressed that the crisis in Tigray is complex and affects the region and the world.

With regard to his country's position on it, he explained in statements to Al-Jazeera Net that the conflict in Ethiopia is witnessing practices against humanity, and is taking place within the scope of the Egyptian-Sudanese strategic interests due to the common neighborhood, adding, "I do not mind as an Egyptian citizen using any means in order to defend Egyptian interests."

He pointed out that the principle in international relations is not to interfere in the affairs of others, while the problem remains that Ethiopia has exceeded these principles, not being keen on normal relations, and threatening Egyptian interests, despite the ongoing negotiations on the dam file for 10 years.