The UN climate summit in Glasgow is now in full swing, the largest since the Paris Summit in 2015. The summit is the largest international conference that Britain has ever hosted. - There is a tension in the air, many are taken by the seriousness of the moment, says Anna-Maja Persson, SVT's foreign reporter on site in Glasgow. 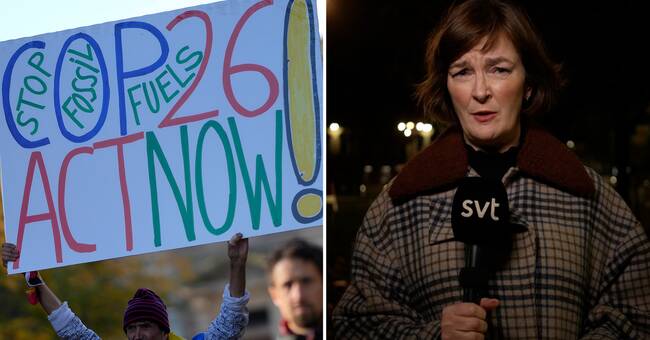 Lots of protesters and a huge security force with 10,000 patrolling police are in place in Glasgow where the UN climate summit is currently taking place.

At the same time, there are extra security measures linked to the pandemic, with extensive testing of everyone who will participate in the meeting.

- It is a gigantic challenge to hold a conference like this in the middle of an ongoing pandemic, says SVT's Anna-Maja Persson.

One of the meeting's most noticed participants is the Swedish climate activist Greta Thunberg.

- She was received like a rock star at the station, there were a huge number of people in place.

There are divided opinions about her, some see her as a saint while others see her as a young girl who has received too much attention, says Anna-Maja Persson.

In his speech, the Prime Minister of the United Kingdom Boris Johnson emphasized the responsibility of the rich countries of the world to work to achieve the climate goals.

There are also high hopes that China and India will surprise the world and sharpen their climate promises to help reach the 1.5-degree target.

China's Xi Jinping will participate digitally, while India's Narendra Modi will be in place physically.

- The fate of the world rests in China's hands.

They emit 28 percent of the world's carbon dioxide and they will not break their emission screw until 2030, and not reach net zero until 2060, says SVT's climate correspondent Erika Bjerström.