CCTV news (news broadcast): The latest agricultural dispatch shows that 90% of the country's autumn grain harvest is completed, and the whole year's grain harvest is a foregone conclusion. China's grain output has remained above 1.3 trillion catties for seven consecutive years.   At present, the harvest of autumn grains in the main producing areas of Northeast China and Huanghuaihai has exceeded 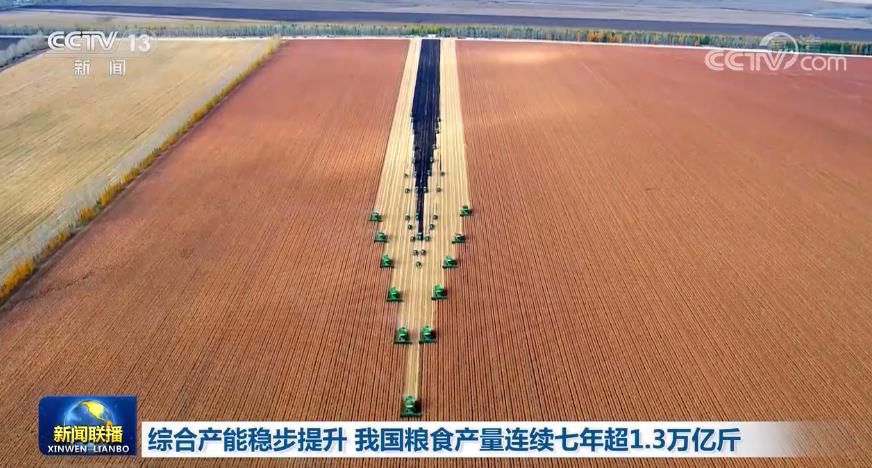 The increase in area is a highlight of China's grain production this year.

To ensure food security, the most important thing is to protect the area.

Party committees and governments at all levels shoulder the political responsibility for food security, and layer by layer the area.

The central government arranged subsidies for the protection of arable land fertility of 120.5 billion yuan, and issued a one-time subsidy of 20 billion yuan for actual grain farmers to cope with the impact of rising agricultural prices; at the same time, the minimum purchase price of wheat and indica rice was increased, and corn and soybean producer subsidies and rice were arranged. The subsidy was 59.5 billion yuan to fully mobilize farmers' enthusiasm for growing grain.

A series of powerful combination punches ensured the grain area.

The area of ​​early rice has remained stable on the basis of a substantial increase last year; the area of ​​autumn grain has increased steadily, laying a solid foundation for the high increase in grain production throughout the year.

The key to ensuring food security is seeds and arable land.

The more lush ones on the left use conservation tillage, and the relatively sparse ones on the right are traditional farming methods.

In order to make good use of black land and raise production capacity, this year, the central government allocated 8.9 billion yuan of funds related to the protection and utilization of black land for conservation tillage and straw returning to the field.

It is estimated that by 2025, the area of ​​black soil conservation farming in Northeast China will reach 140 million mu, accounting for about 70% of the total cultivated area in suitable areas in Northeast China.

As of the end of September, 865 million mu of high-standard farmland had been built across the country, and the per mu of grain production capacity increased by 10% to 20%, and the per mu per mu had saved costs and increased efficiency by about 500 yuan.

The revitalization of the seed industry has also accelerated.

This year, the grain yields of summer grains, early rice, and autumn grains have all increased, and the contribution rate of improved varieties has reached 45%.

Under the comprehensive measures, China's grain production capacity has steadily increased, and the annual grain output has remained above 1.3 trillion catties for seven consecutive years.

At present, all regions are rushing to plant winter wheat, and the progress of planting in autumn and winter has been significantly accelerated.

Seventy percent of the winter wheat has been planted.