On the day Abdel Nasser screamed: Let everyone stay in his place.. Continuous debate over the Manshiya accident 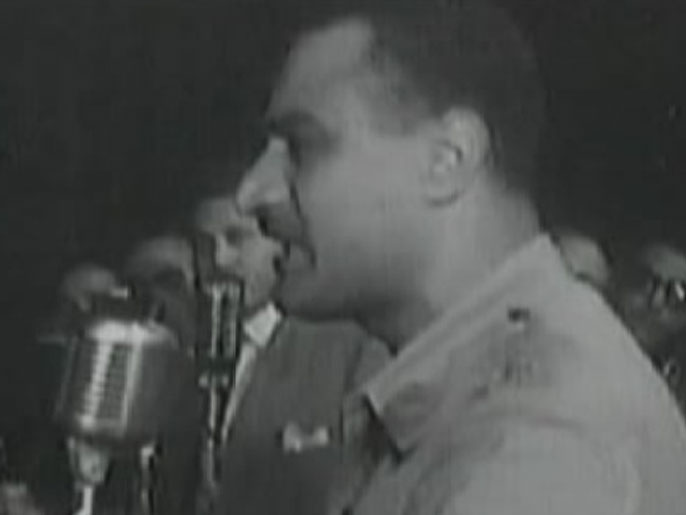 77th anniversary of the assassination attempt on late President Gamal Abdel Nasser in October 1954 was accompanied by the confirmation of prison sentences of varying lengths a few days ago for 293 accused of attempting to assassinate Egyptian President Abdel Fattah El-Sisi twice, one in Saudi Arabia while performing Umrah and the other in Egypt.

Despite the passage of these long years since the attempt to assassinate Abdel Nasser, the incident - known as the "Manshiya incident" - is still a matter of controversy.

The incident occurred on October 26, 1954, when an accused named Mahmoud Abdel Latif fired 8 bullets at Abdel Nasser - who was then prime minister - while he was giving a speech in the Mansheya area of ​​Alexandria, resulting in injuries in the audience, while Abdel Nasser survived to deliver Emotional enthusiastic words in the audience.

The suspicions are based on confessions close to Nasser that he plotted a number of plots to establish the presence of the Revolutionary Command Council in power, and to embarrass democracy advocates.

In his book "Now I Speak", a prominent political member of the Revolutionary Command Council, Khaled Mohieldin, later said that Nasser admitted to him that he had paid labor leaders to lead demonstrations against the call for democracy, claiming that the matter was postponed until the revolution settled in power.

In the details of the Manshiya incident, skeptics rely on the farcical evidence of evidence, including what Al-Ahram newspaper reported at the time that a construction worker found the crime weapon, so he traveled from Alexandria to Cairo on foot for a week, to deliver it himself to Gamal Abdel Nasser.

The accusation was directed against the most important opponents of Abdel Nasser at the time, the Muslim Brotherhood, so the leaders of the group were tried, starting with the General Guide, and the trial resulted in the execution of some of them and the imprisonment of others.

In the context of the controversy of the incident and the lack of documentation of information, the writer close to the Egyptian parliamentary government criticized Lamis Gaber's resorting to some TV channels to a fake person who claimed his participation in the attempt to assassinate Abdel Nasser, stressing that he was not one of the defendants in the case in the first place.

Jaber added in an article published in the Egyptian newspaper Al-Watan that the story began about 7 years ago with a man named Khalifa Atwa, who claimed that he was the third accused in the case of the attempted assassination of Gamal Abdel Nasser, and he went out on a number of channels and spoke about some of the information he had left from those times, but it is confused and unorganized. Many of them are authored.

The researcher in political and security affairs, Ahmed Maulana, comments that this incident, despite its importance, cannot be certain of the truth of its occurrence according to the authority’s narrative, nor the narrative of its opponents from the Muslim Brotherhood.

Speaking to Al-Jazeera Net, Maulana believes that there was a general tendency to target Abdel Nasser, but other testimonies indicate that the implementing group and coordination with Mahmoud Abdel Latif were infiltrated, in order for the matter to appear in this way and Abdel Nasser survive, and achieve his goals, and this coordination is also uncertain. , as described.

Maulana pointed out that the authority's narrative - according to the texts of the investigation into the Manshiya accident, which was published by the historian Abdel Azim Ramadan - is largely coherent.

The official records say that the offender, Mahmoud Abdel Latif, belonged to the Muslim Brotherhood, and he was sitting in front of Abdel Nasser, and his bullets flew, despite the proximity of the distance, to hit those around Nasser.

The investigation records indicate that the plot was not limited to the assassination of Abdel Nasser only, but that there was a plan drawn up to assassinate members of the Revolutionary Command Council and about 160 army officers.

The investigations stated that there was another conspiracy orchestrated by Al-Bakbashi Abu Al-Makarem Abdel-Hay, an army officer, to blow up the plane that carried Abdel Nasser.

The defendants in the incident - in addition to Mahmoud Abdel Latif - are: Youssef Talaat, Hindawi Dower, Ibrahim Al-Tayeb, the writer and Islamic thinker Abdul Qadir Odeh, Muhammad Farghali, and the Muslim Brotherhood guide at the time, Hassan Al-Hudaybi.

During the trial, the judges were officers from members of the Revolutionary Command Council, and it was called the People’s Court, and it issued the ruling less than two months after the incident. to 2,943 detainees.

Doubts of the past and the present

On its 77th anniversary, tweeters considered that the authority in Egypt throughout the ages has been simulating conspiracies to justify and pass its goals, including the Manshiya incident, which was the first spark for the consolidation of military rule in the country, according to their description.

In an article published in Al-Shorouk newspaper, the Egyptian writer continued, the former Minister of Culture said: "Things between the two parties began to go from bad to worse, until the final rupture with the Manshiya incident, which raised Abdel Nasser's popular balance, and helped rally the masses around him, and the regime also benefited from The incident is a huge political benefit."