It has been shaky for the transport chains in the world lately. Signals are now being given from several companies that they have begun to review the possibilities of moving production from abroad to Sweden. One of them is the furniture company Kinnarps. - We do not believe in being far away with long transports. We want to be close, says production director Anders Hermansson. 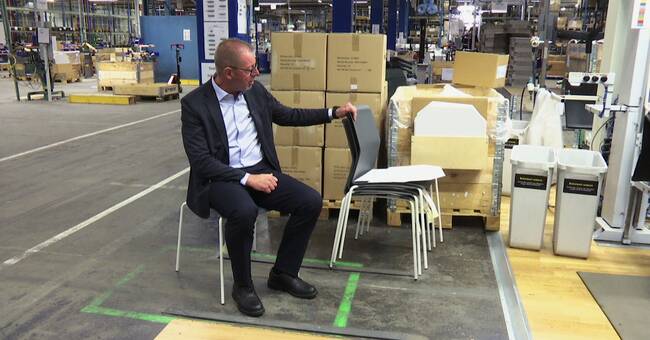 Pandemic, container shortage and stop in the Suez Canal.

Recently, several problems have posed this to the transport chains in the world.

This has made it clearer what risks exist for Swedish companies that have production abroad.

- In recent decades, the focus has been on relocating production to low-cost countries.

Now there has been a trend break in such a way that more companies choose or are considering moving their production home, says Per Hilletofth, professor of industrial economics at the University of Gävle.

However, he believes that the challenges surrounding the transport chains already existed before the corona crisis.

- The interest in relocation started even before the pandemic, but now the challenges with global supply chains have become even more visible.

Johan Trouvé, CEO of the West Swedish Chamber of Commerce, has also received signals from several companies that have begun to review the possibility of moving their production home to Sweden or Europe.

The pandemic accelerated the movement

One company that has chosen to move production home from Asia and Europe is the furniture company Kinnarps with factories in several places in Sweden, including Kinnarp outside Falköping.

- Sustainability is an important part for us, so we had actually started this course before the pandemic struck.

But it accelerated that we would reduce our presence in Asia and instead concentrate on our own operations, says Anders Hermansson, production director at Kinnarps.

The relocation has led to a dozen new positions at the operations in Kinnarp, Jönköping and Skillingaryd.

In about a year, the company aims to have no production left at all in Asia.

In the video, you can follow into the factory in Kinnarp and hear the production director Anders Hermansson tell more about the move.