SMHI is now issuing a very unusual class 2 warning for sudden ice slip. In Västerbotten, in addition to slippery roads, there can also be power outages due to icy rain. 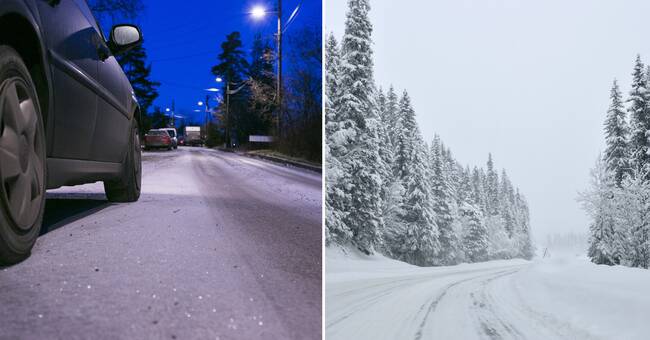 Extreme slipperiness occurs when freezing rain freezes as soon as it reaches the ground or other surfaces.

It risks becoming extreme on the roads in large parts of northern Sweden during the afternoon and evening.

It is the most serious warning class for sudden ice slide.

- It is probably the first time ever that they go out with a warning like this in Sweden, says SVT's meteorologist Deana Bajic.

SMHI confirms to SVT Nyheter that a class 2 warning of this kind is very unusual and can not say for sure if they have ever issued one before.

Within six hours, at least 3 millimeters of rain is expected, which causes severe slipperiness.

In addition, the slip is difficult to fight because it comes so suddenly.

- It can be catastrophically slippery if there is a lot of rain, says SVT's meteorologist Jannicke Geitskaret, and continues:

- It is almost as if you should not go out with the car.

It is important to be very aware.

Can knock out electricity

And in addition to slippery roads, the weather also risks knocking out the electricity supply.

- There can be a power outage when the ice settles on power lines that then fall off, says Deana Bajic.

Even in the counties of Norrbotten, Västernorrland and Jämtland, there is a risk of slippery roads on Tuesday evening.

SMHI has issued class one warnings there.

- During the night towards Wednesday, a new area will come with rain, so it will be slippery tomorrow as well.

Then there is a risk of freezing rain also in Dalarna, says Deana Bajic.