Enough is enough. Yes, there were problems with last November's election, but it was litigated and scrutinized months ago, and we know the outcome. Continuing to question those revisions, and continuing to challenge the outcome of the elections, does permanent damage to our country. It's time to stop all this 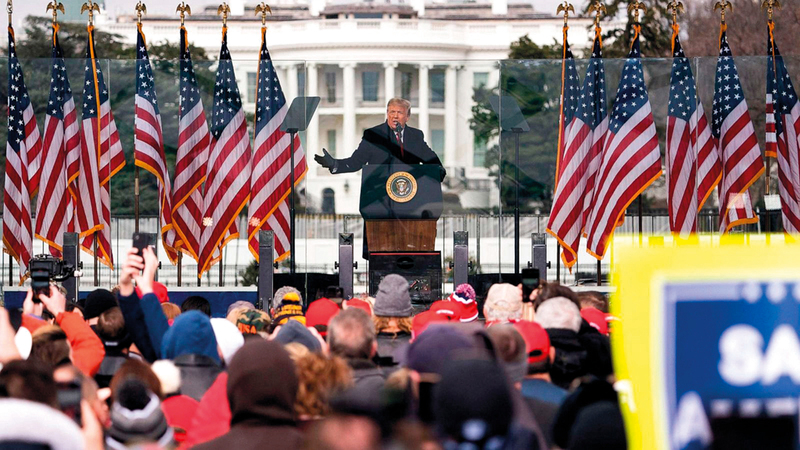 Yes, there were problems with last November's election, but it was litigated and scrutinized months ago, and we know the outcome.

Continuing to question those revisions, and continuing to challenge the outcome of the elections, does permanent damage to our country.

It's time to stop all of this.

Candidates are entitled to demand recounts, vetting, and judicial review, as former President Donald Trump did.

We need those guarantees to reassure Americans, especially those who voted for the supposed loser, so that the winner can legitimately take office.

And in the days and weeks after voting, as these challenges progress, candidates take responsibility, they must be clear that they are moving within known rules, they must confirm that they are following established procedures to address their challenges, and most of all that they will respect final decisions.

That's not what Donald Trump has done, and since November 3, he has consistently argued that the elections were stolen from him, and that Joe Biden is not his rightful successor.

And in the months following the election, Trump repeatedly pressured the Justice Department to pursue his appeals, even after its lawyers decided the appeals lacked credibility.

In early January, when Congress met to accept the state's ratified vote count and formally elect the new president, the former president asked his vice president and his congressional allies to delay that ratification and confirm Biden's election.

Meanwhile, he urged his most ardent followers to come to Washington on January 6 to protest the Congress' action.

Although there was no evidence of his involvement in the Capitol attack, many Democrats and some anti-Trump Republicans responded, charging him.

What gives this old story impetus is that Trump has continued to challenge the election results.

He did not say the elections were "stolen" last week, but hinted at it.

And what he told his millions of followers was this:

“The 2020 elections were full of mistakes, irregularities and scandals.

The radical left knows this, and the media knows it, too.

The patriots of our country know this, and now the United States is paying a heavy price.

"A new poll showed that 56 percent of voters believe that there is cheating," he added.

There are several important points to remember here: The first is that Trump's attack on our constitutional procedures has been accompanied by reactions from the other side. The Democrats have launched their devastating attack on many fronts, putting forward the idea of ​​adding two new states to the union because they are reliable Democratic voters, and have repeatedly proposed adding more justices to the Supreme Court because the Court currently has a conservative majority, and both are part of efforts to fundamentally change the legislative and judicial branches through Mobilize them with supporters. The White House and its allies in Congress only dropped these initiatives because they angered American voters, and Democrats still threaten to repeal the Senate's stall rule, which would destroy the Senate's role as a forum for discussion and compromise, turning it into a copy of the House of Representatives, and again they want to change the permanent institutions of advantages short term.

Like Trump, the Democrats were not eager to accept the legitimacy of the popular votes they had (or might lose).

Before the vote in November, Hillary Clinton said in a television interview, "Joe Biden shouldn't compromise under any circumstances, because I think this will go on, and in the end I think he will win if we don't give up an inch, and if we are relentlessly focused, like the side." the other.”

And what Trump did was follow Hillary Clinton's advice.

This bipartisan attack on the legitimacy of the presidential election contrasts sharply with the 2000 rivalry between Al Gore and George W. Bush, which ultimately required a Supreme Court ruling.

Once that decision was passed, Gore and his supporters agreed to the final count in Florida, which decided the election, and let things go.

Richard Nixon conceded defeat on election night in 1960, although he had a very strong case that he lost it only because of fraud in Chicago and Texas at the hands of Lyndon Johnson's allies.

Yet neither Nixon nor Gore continued to complain about the new administration, or to challenge the new president's legitimacy.

It seems that those days are over and our republic yearns for them.

Leaving these challenges to the November results does not mean a lukewarm acceptance of our current flawed electoral arrangements. There is a legitimate battle between Democrats - who argue that statewide changes to voting laws will disenfranchise legitimate voters - and Republicans who believe changes such as voter identification laws will reduce fraud. There is an urgent need to ensure that procedures for voting by mail, which are now widespread, take place fairly. There is a legitimate battle over the apparent bias of the mainstream media, and the problematic ability of social media to obscure political views that oppose it. The most egregious example of the malign influence of technology companies was the suppression of the New York Post stories about the corruption of the Biden family. The public was largely prevented from seeing these reports in the country's fourth-largest newspaper in the weeks leading up to the November elections.

The media and the big tech companies have chosen to act as political advocates, and the public knows it.

Opinion polls show that confidence in her has evaporated, and this is true.

Nevertheless, these means managed to achieve the victory of their favorite candidate.

The justification is the same as that provided by Senate Majority Leader Harry Reid, who (before the 2012 election) falsely claimed that Republican presidential candidate Mitt Romney had not paid any taxes in 10 years.

After the election, Reid was asked if he regretted lying, and his response to the TV presenter was simply: "Romney didn't win, did he?"

We've seen lies like this surrounding the Russia collusion hoax, which initially sought to deny Trump a win in 2016, then paralyzed his presidency for several years, all based on flimsy allegations, quickly refuted by the FBI, that were created and published by Hillary Clinton , during the election campaign.

Five years later, we are still waiting for a legal account from Special Counsel John Durham.

And delayed justice is a denial of justice.

Politicians like Harry Reid, Clinton and Trump have launched attacks like this for tactical gain, and unfortunately for them the tactical advantage does real damage to the structure of our democracy.

• The most egregious example of the malign influence of technology companies was the suppression of the New York Post stories about the corruption of the Biden family.

• After Trump questioned the credibility of the election result, the Democrats launched their devastating attack on several fronts, and put forward the idea of ​​adding two new states to the union because they are reliable democracies.