Murder of Mireille Knoll in 2018: the trial opens before the Paris Assize Court

The trial of the two men accused of the anti-Semitic murder of Mireille Knoll opens Tuesday at the Assizes in Paris, and is scheduled until November 10. The latter reject the responsibility ... 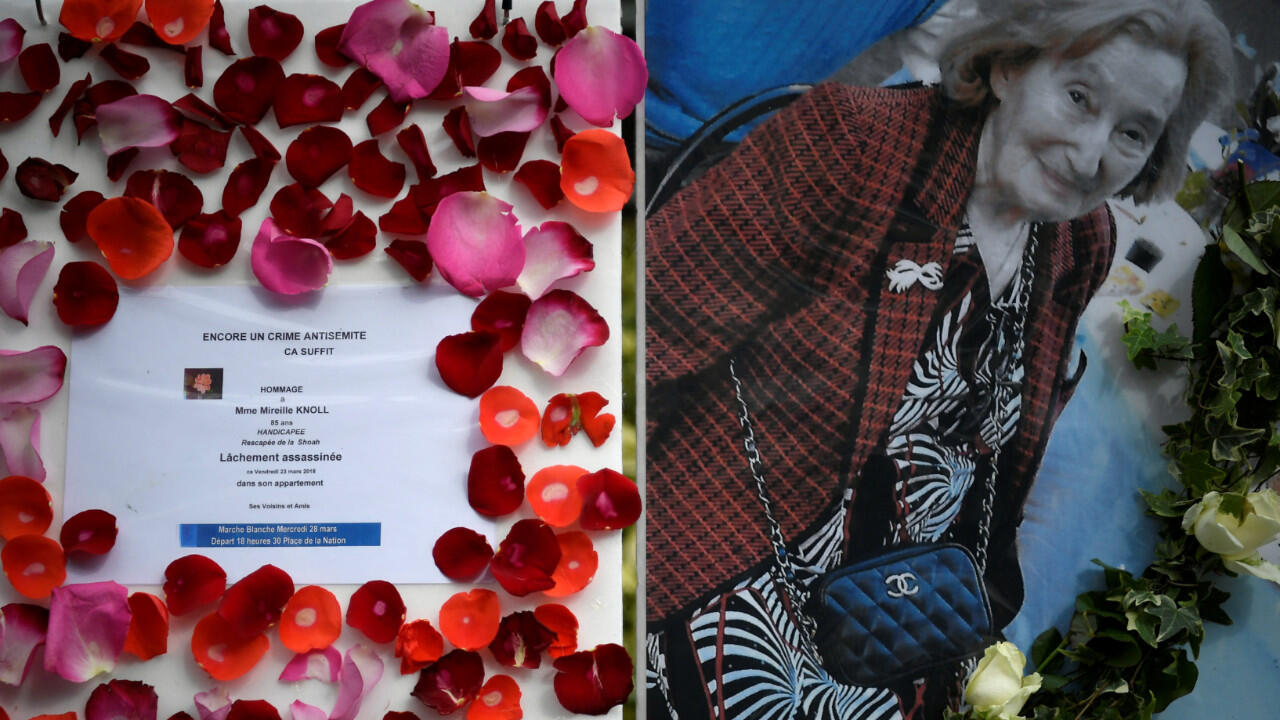 The affair had provoked indignation and commotion in France and abroad.

The trial of two men, accused of the anti-Semitic murder of Mireille Knoll, an old Jewish lady killed at home in 2018, opens Tuesday, October 26 in Paris.

It is scheduled until November 10.

The two men, who had met in prison, blame themselves for the murder.

On March 23, 2018, firefighters were called in for a fire in a modest building in eastern Paris.

On the second floor, they discover the partially charred body of Mireille Knoll, across her medical bed, legs dangling.

The body of this 85-year-old woman, suffering from Parkinson's disease and who cannot move alone, is stabbed 11 times, especially in the throat.

The investigation quickly revealed that Yacine Mihoub and Alex Carrimbacus were there.

But what happened in the small apartment remains unclear, so much the versions of the two men are opposed.

Alex Carrimbacus, a homeless marginal with a psychiatric history, maintains that Yacine Mihoub offered to join him for a "money plan".

Yacine Mihoub, son of the neighbor who had known Mireille Knoll since childhood and kept glasses of port at the old lady, assures him that he had simply offered to come and have a "good time".

On the spot, according to Alex Carrimbacus, the discussion escalates when Yacine Mihoub accuses Mireille Knoll of having "swayed" him and sent him to prison.

He carries her to his room, "slitting her throat" to cries of "Allah Akbar".

Yacine Mihoub maintains that Alex Carrimbacus immediately sought to steal Mireille Knoll, asking on her arrival if she was "armored".

He piles up furs and knick-knacks - there were no valuables in the apartment.

Then Yacine Mihoub hears a cry in the room, he sees Alex Carrimbacus stabbing the old lady.

Each accuses the other of having decided to set fire.

Two versions "not very credible", will estimate the investigators, whose task is complicated by the particularly developed propensity of Yacine Mihoub and Alex Carrimbacus to "lie" and "to manipulate", according to their close relations and the experts.

The two men had been convicted several times for theft and violence - and several false bomb threats in the case of Yacine Mihoub.

His mother, accused of having cleaned the murder knife, will be tried alongside them.

The investigating judges chose to retain the anti-Semitic character on the basis of a discussion reported by Alex Carrimbacus and deemed "plausible".

He said that before the dispute, he "thought he heard" Yacine Mihoub "talk about the financial means of the Jews, their good situation", and Mireille Knoll intervene "to explain that not all Jews have a good situation" .

The investigation also showed "the ambivalence of Yacine Mihoub vis-à-vis Islamist terrorism which notably advocates anti-Semitism", noted the judges, specifying however that no one had ever heard him utter anti-Semitic remarks. .

The drama, which occurred a year after the murder in Paris of Sarah Halimi, a Jewish sexagenarian thrown from her balcony, had led to a great "white march" in Paris and revived the debate on a "new anti-Semitism" linked to the Islamization of some. neighborhoods.

Mireille Knoll was killed "because she was Jewish" had proclaimed President Emmanuel Macron, an indignation shared in particular in the United States and in Israel, in the face of the fate of this woman who had fled Paris in 1942 to escape the anti-Semitic roundups.

The defense of Yacine Mihoub, who considered that the investigating judges had yielded "to the pressure of public opinion", did not wish to speak before the trial.

The lawyer of the sons of Mireille Knoll, Me Gilles-William Goldnadel, wished him a "severe punishment" for this "horrible crime".