The South Korean pavilion at Expo 2020 Dubai will travel with lovers of Korean food to the crowded streets of Seoul filled with various types of traditional and modern meals. 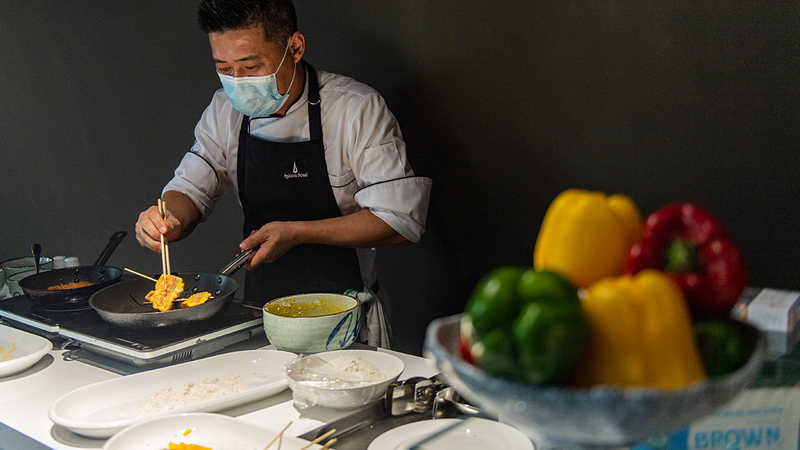 The South Korean pavilion at Expo 2020 Dubai will travel with lovers of Korean food to the crowded streets of Seoul filled with various types of traditional and modern meals. James Kawong, who presented a group of the most delicious dishes of a popular nature, which received great attention from visitors to the international event who are lovers of Korean food, especially the famous “Kimchi Pan Cake” dish prepared using many types of fresh vegetables, such as onions, chili peppers and leeks, and a skewers dish Shrimp, and other dishes that abound in Korean cuisine.

Chef James Kawong, head chef of the Asiana Hotel in Dubai, confirmed that Korean dishes have largely succeeded in maintaining their originality in the face of the great invasion of international cuisine, which has become appealing to many Korean youth.

Kawong pointed out that traditional Korean dishes, such as "japchi", "kimchi" and "kimchi pancake", are traditional dishes that adults are keen to eat and are less popular among young amateurs for fast international food, which has spread a lot in South Korea in recent years. It is the case in the rest of the world.

Regarding the dishes that he offers to visitors to the pavilion located in the “mobility” area, Kawong explained, “The pavilion wanted to serve popular meals to a large extent, mimicking those that are cooked and sold in the crowded streets of Korea’s cities, due to the speed of preparation, these dishes do not require large cooking tools. It is just a table and an electric oven only, so it suits the owners of small restaurants that are located on the sidewalks of the streets.”

He said, "Today, we convey the authentic folk flavors to the Expo 2020 audience, such as shrimp skewers, which are mixed with three types of red, green and yellow peppers, a shrimp and a piece of white mushroom, mixed with eggs and white farina and fried using a little oil."

Kawong added: “The second dish is (kimchi pancake), which is a variety of vegetables such as leeks, onions, peppers and turnips, noting that (kimchi pancake) is very similar to the well-known (omelette) dish, but with a pure Korean flavor, and this The dish is among the most popular dishes that are eaten daily in the crowded streets of Korean cities.”