Editing Nisreen Abu Kamil: For 6 years, I have been forbidden to visit my seven children

“One day before liberation from the occupation’s prisons, I had a fear that my little boy Ahmed would not know me. The occupation arrested me while he was in his eighth month, but when I entered Gaza through the Beit Hanoun “Erez” crossing, he hugged me and said, “You are my mother.” Immediately That phrase removed the tragedies of 6 years of the 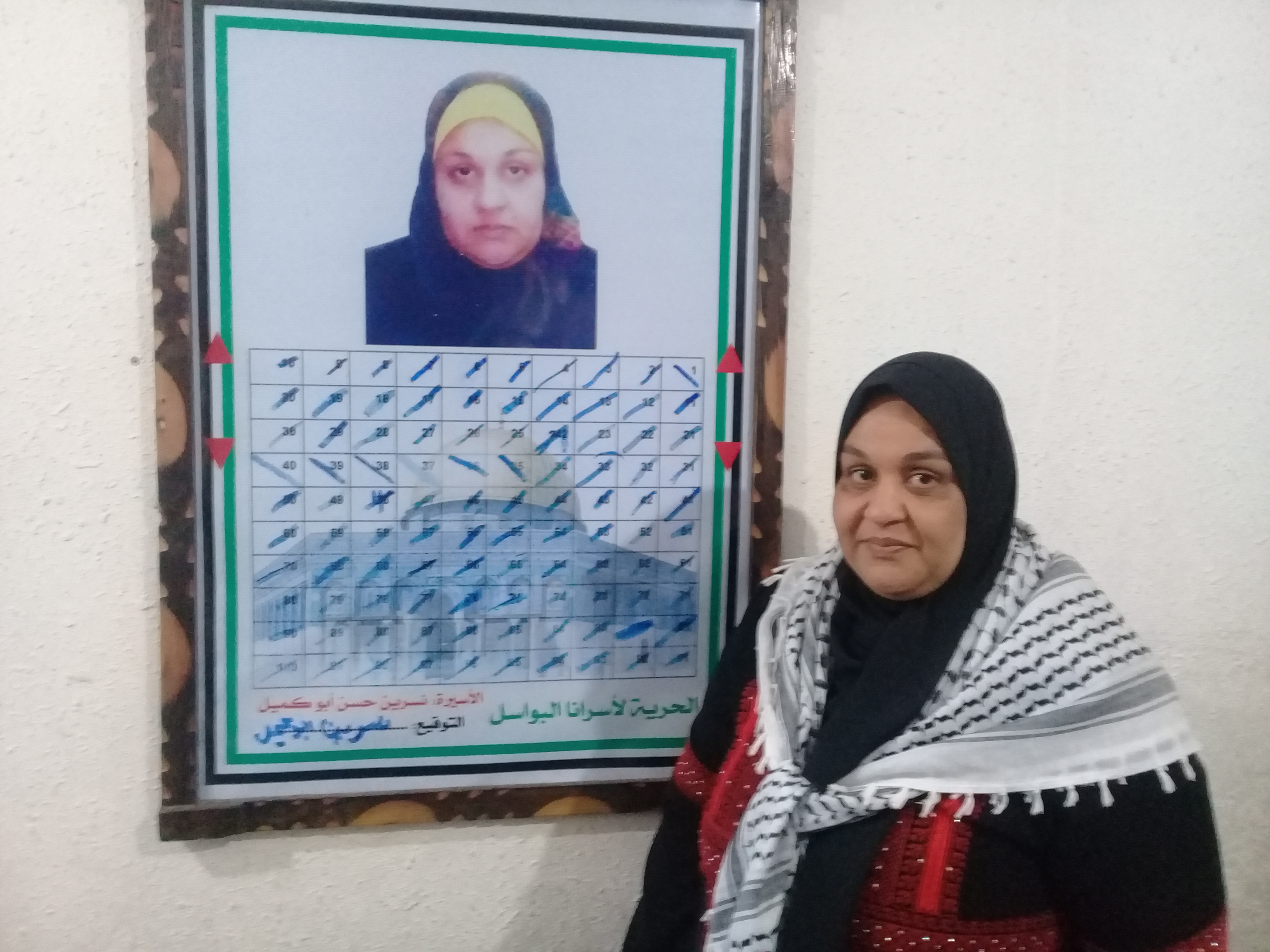 Editing Nisreen Abu Kamil: For 6 years, I have been forbidden to visit my seven children

“One day before liberation from the occupation’s prisons, I had a fear that my little boy Ahmed would not know me. The occupation arrested me while he was in his eighth month, but when I entered Gaza through the Beit Hanoun “Erez” crossing, he hugged me and said, “You are my mother.” Immediately That phrase removed the tragedies of 6 years of deprivation behind the bars of Israeli prisons.”

The freed Palestinian prisoner, Nisreen Abu Kamil, from the Gaza Strip, describes the moment she met her seven sons, after the occupation allowed her to enter the Strip, three days after her release from the Israeli Damon prison, where 31 Palestinian female prisoners, most of whom are mothers, are behind bars.

Abu Kamil continued her speech by saying, “From the first day of my return to my house, my son Ahmed (six years old) did not leave me for one moment, whether inside or outside the house, and the next day he woke me up early, and spent his time in my lap, and then asked me to prepare He and his brothers had breakfast, and this was the most beautiful moment, when I gathered with my sons and my husband under one roof and one table, after lean years of forced separation.

"Emirates Today" met Abu Kamil inside her house in the neighborhood of "Tal al-Hawa" to the southwest of Gaza City, where he was teeming with women who came to congratulate the liberated captive on her release from the occupation prisons.

The liberated Palestinian prisoner recounts the details of her arrest by the occupation forces at the Erez crossing on October 18, 2015, while she was on her way to visit her parents and siblings in the occupied city of Haifa, where she was born.

It turned out that the forces immediately took her to the "Ashkelon" military prison, and she stayed inside the investigation center for 21 consecutive days, during which she was subjected to a harsh interrogation and physical torture.

Abu Kamil continues by saying, “After 11 days of detention in Ashkelon detention center, I was exposed to what is known as the “Shabeh” operation, where my hands were tied, and I was suspended from the ceiling of the interrogation room, while my feet were 20 centimeters above the ground, and I stayed on this The situation lasted for (24) hours straight, and during that time the soldiers poured cold water on my face and body while I was handcuffed and my legs were tied.

She adds, during which I was interrogated, as the occupation issued false pretexts against me, namely, planning to blow up Israeli government headquarters and recruit Palestinian youth to enter the occupied Palestinian territories, and this is pure slander and a lie. Personal.

After the investigation ended in Ashkelon prison, the occupation detained her in the Hasharon prison, and after several weeks she was transferred to Damon Prison, where she spent the period of captivity, until her release on October 17.

Abu Kamil points out that as a result of the tragic conditions of detention and deliberate medical negligence by the Israeli Prison Service Administration, she developed chronic diseases several weeks after her arrest, including pressure, diabetes, chest allergies, and leg tumors.

Regarding this, the liberated captive says, “After moving to Damon prison, I discovered that I had pressure and leg tumors, and then I started to suffer from other chronic diseases, and the occupation was procrastinating in securing the appropriate treatment, and when I asked them to provide medicine, they would bring only painkillers.”

When the occupation arrested me, my children were young, to prevent me for the duration of the families from embracing and caring for them, to spend their years of life and prison bars prevented me from watching them grow up before my eyes day after day,” says editor Abu Kamil.

Abu Kamil continues her speech, the occupation has prevented me from visiting my seven sons and my husband for six years, and when I submit a request to visit them, the Prison Authority administration rejects it, on the grounds that it is not allowed to visit relatives from the Gaza Strip, while the families of the female prisoners came to visit them several times during one year.

She adds, as evidence of the occupation's intentional deprivation of visiting my children, is that the families of the female prisoners from Gaza brought me pictures of my children on every visit, and this was the only way that enabled me to see my children of all ages.

The pictures of her children, Rafiq Nisreen, were not behind bars, as she used to hear her children's voice almost daily on the local Palestinian radio stations, namely, Voice of Prisoners, Radio Ajyal, Voice of Palestine and Al-Raya radio.

The liberated captive says, I used to hear the voice of my sons on the Palestinian radio stations, which devoted several programs to sending the sons and their families audio messages to their families behind bars. On the hotter than hot coals.” My sons were telling me via voice messages that they had passed their final exams and had moved on to a new stage of study.

She adds, only a few kilometers separated me from my children, and despite that, I was deprived of hugging and visiting them, but their images and voices made me forget my loneliness, and they were my only recourse to relieve my grief, as a result of the forced distance from them.

Among the audio messages that Abu Kamil's sons sent to her on Palestinian radios, they prepared a calendar, including the last 100 days of her detention.

Abu Kamil goes on to say, I also made a “calendar,” just like the one that my children prepared, and every day that goes by I put a circle on it, until those days passed and I met my children, and I watched that “calendar” that I touched their hands daily, to remain a living witness to the tragedy that deprived me of my children on over many years.”

The occupation prevented the editor, Abu Kamil, from reaching her family after her release, claiming that she had an Israeli identity card, as she hails from the occupied city of Haifa, but she refused and insisted on returning to her children and family in the Gaza Strip.

After three days Nisreen spent at the Erez Crossing, and inside Palestinian homes in the Palestinian cities of Hebron and Rahat, the occupation allowed her to enter Gaza, according to several conditions it set, namely, not allowing her for two years to leave Gaza, to reach the occupied Palestinian interior, and to pay a fine of $ Four thousand shekels.