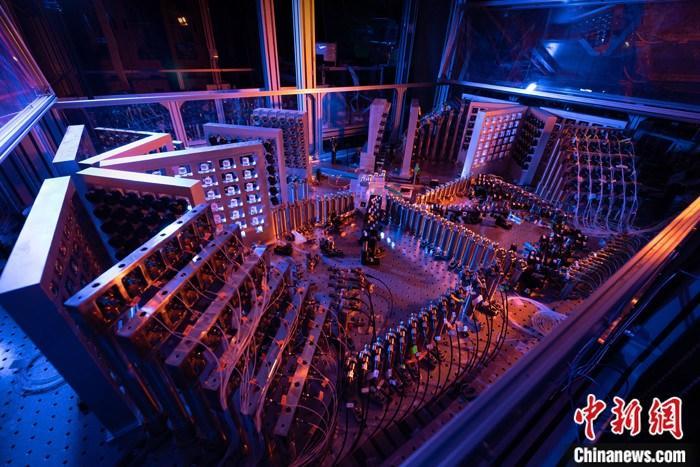 "Zu Chongzhi 2.0" and "Nine Chapters 2.0" come out. China has achieved the superiority of quantum computing in two physical systems

On October 25, the well-known physics journal "Physics Review Letters" simultaneously published two papers from the University of Science and Technology of China. The article shows that with The 66-bit programmable superconducting quantum computing prototype "Zuchongzhi No. 2" (also known as "Zuchongzhi 2.0") was successfully developed and the 113 photon 144 mode quantum computing prototype "Nine Chapter 2" (also known as "Nine Chapter 2") was successfully developed. 2.0”), the scientific research team of the University of Science and Technology of China has made important progress in the quantum computing of superconducting quantum and optical quantum systems. This also means that China has become the only one in the world to achieve quantum computing superiority milestones in two physical systems. s country.

The data picture shows the experimental photos of the 144-mode interferometer (part of the Jiuzhang No. 2).

The reporter was informed that a research team composed of Pan Jianwei, Zhu Xiaobo, and Peng Chengzhi from the Institute of Quantum Information and Quantum Technology Innovation, Chinese Academy of Sciences, University of Science and Technology of China, cooperated with the Shanghai Institute of Technical Physics, Chinese Academy of Sciences to build a 66-bit programmable superconducting quantum computing prototype. "Zuchongzhi No. 2" has realized the rapid solution of the task of "quantum random line sampling".

According to the existing theory, the quantum random circuit sampling problem handled by "Zuchongzhi No. 2" is 7 orders of magnitude faster than the fastest supercomputer at present, and the computational complexity is higher than that of the 53-bit superconducting quantum computing prototype "Plalanus" publicly reported by Google. An increase of 6 orders of magnitude, this achievement is the first time that China has reached the milestone of "quantum computing superiority" in the superconducting qubit system after the "Nine Chapters" of the optical quantum computing prototype.

In 1981, Nobel Prize winner Richard Feynman put forward the idea of ​​a quantum computer. How to turn the idea into reality has always been the dream of scientists.

At present, quantum computing has been considered to be the key technology of the next generation of information revolution, which can generate computing power beyond traditional computers through specific algorithms and solve major economic and social problems.

Therefore, the development of quantum computers has become a major challenge at the forefront of world science and technology.

In 2020, Pan Jianwei’s team successfully constructed the “Nine Chapters” of a 76-photon quantum computing prototype. It only takes 200 seconds to process the Gaussian Bose sampling problem, which is 100 trillion times faster than a supercomputer, making China the second implementation in the world. A country of "quantum superiority" (also known as "quantum hegemony").

Since the beginning of this year, Pan Jianwei's team has carried out a series of conceptual and technological innovations, and recently successfully developed the "Nine Chapter 2".

"We have three major breakthroughs. First, we have significantly improved the yield, quality, and collection efficiency of quantum light sources, and increased the key indicators of the light source from 63% to 92%. Second, we have increased the multi-photon quantum interference circuit from 100 dimensions to 144 dimensions. The number of photons manipulated has increased from 76 to 113. Once again, a programmable function has been added." said Lu Chaoyang, a member of the research team and a professor at the University of Science and Technology of China.

Experimental results show that the computing power of "Nine Chapter 2" has been greatly improved.

The "Nine Chapter Two" problem that can be calculated in 1 millisecond, the world's "fastest overcalculation" takes 30 trillion years.

"The current'Nine Chapter 2'is only a'single champion', but its super computing power has potential application value in graph theory, quantum chemistry and other fields." Lu Chaoyang said, "Future general-purpose quantum computers are expected to be used in cryptography. Deciphering, weather forecasting, material design, drug analysis and other fields play a role."

Another paper in the same period showed that a research team composed of Pan Jianwei, Lu Chaoyang, and Liu Naile from the University of Science and Technology of China cooperated with the Shanghai Institute of Microsystems of the Chinese Academy of Sciences and the National Center for Parallel Computer Engineering and Technology to develop the theory and experiment of stimulated amplification of quantum light sources. Methods, constructed 113 photon 144 mode quantum computing prototype "Nine Chapter 2", and realized the phase programmable function, and completed the rapid solution of the Gaussian Bose sampling task used to demonstrate the "superiority of quantum computing" .

According to the existing theory, "Nine Chapter 2" can process Gaussian Bose sampling 1024 times faster than the fastest supercomputer.

This achievement has once again refreshed the international technical level of optical quantum manipulation, and further provided experimental evidence for the acceleration of quantum computing.

Pan Jianwei's team has always been at the international leading level in optical quantum information processing.

This year, the team carried out a series of conceptual and technological innovations on the basis of the "Nine Chapters".

Inspired by the concept of laser-"stimulated emission light amplification", the researchers designed and realized the stimulated dual-mode quantum compression light source, which significantly improved the yield, quality and collection efficiency of the quantum light source.

In addition, through the compact design of the three-dimensional integration and collection optical path, the multi-photon quantum interference circuit has increased to 144 dimensions.

As a result, the number of photons detected by "Nine Chapter 2" has increased to 113, and the dimension of the output state space has reached 1043.

By dynamically adjusting the phase of the compressed light, the researchers further realized the reconfiguration of the Gaussian Bose sampling matrix, demonstrating the programming ability of "Nine Chapter 2" to solve mathematical problems with different parameters.