Mohammed bin Rashid: «Expo» strengthens the bonds of connection between the peoples of the world

His Highness Sheikh Mohammed bin Rashid Al Maktoum, Vice President and Prime Minister of the UAE and Ruler of Dubai, stressed that the meeting of the cultures of the peoples of the world, their history, innovations, development projects, and investment opportunities, in one location within the "Expo 2020 Dubai", enhances the positive impact of the global event. 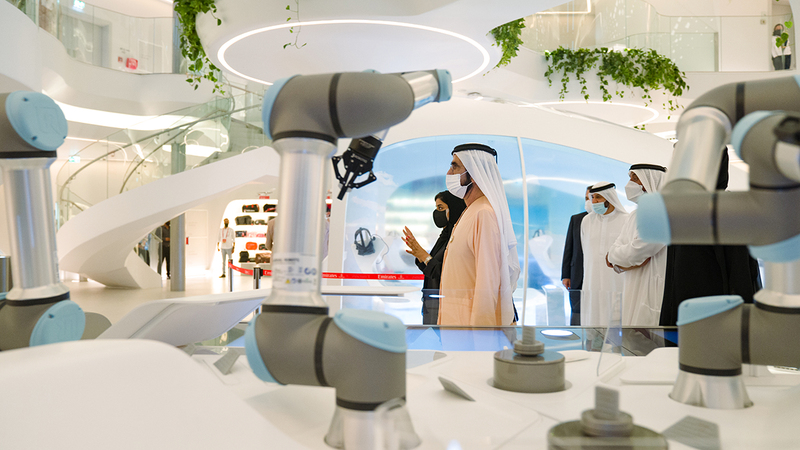 He met the President of the Maldives and visited the pavilions of Egypt, Palestine, Switzerland and Emirates Airlines

Mohammed bin Rashid: «Expo» strengthens the bonds of connection between the peoples of the world

His Highness Sheikh Mohammed bin Rashid Al Maktoum, Vice President and Prime Minister of the UAE and Ruler of Dubai, stressed that the meeting of the cultures of the peoples of the world, their history, innovations, development projects, and investment opportunities, in one location within the "Expo 2020 Dubai", enhances the positive impact of the major global event. On the land of the Emirates, through the comprehensiveness of the various human and cultural experiences offered by the pavilions of 192 countries, that satisfies the aspirations of every visitor, and meets his goal of the visit, whether he is seeking knowledge gains or identifying opportunities for economic partnerships, while the most important benefit is evident in strengthening the bonds of connection. between peoples, and closer bridges of rapprochement between them.

This came during his visit, yesterday, to the headquarters of «Expo 2020 Dubai», and included the visit, which was accompanied by HH Sheikh Ahmed bin Saeed Al Maktoum, President of the Dubai Civil Aviation Authority, Supreme President and CEO of Emirates Airlines Group, Chairman of the Supreme Committee for « Expo 2020 Dubai”, HH Sheikh Mansour bin Mohammed bin Rashid Al Maktoum, Minister of State for International Cooperation and Director General of the “Expo 2020 Dubai” Bureau, Reem bint Ibrahim Al Hashemi, pavilions of the Republic of Maldives, Egypt, Palestine and Switzerland.

During his visit to the Maldives pavilion, His Highness Sheikh Mohammed bin Rashid Al Maktoum, met with the President of the Republic of the Maldives, Ibrahim Mohammed Saleh, and His Highness exchanged cordial conversations with the guest president on the overall bilateral relations and friendship and cooperation ties between the two countries, and the Maldives' participation in the Expo. The participation represents an opportunity for further rapprochement at the various economic and cultural levels.

His Highness and the President of the Maldives were acquainted with the most important offerings of the pavilion, whose design was inspired by the marine environment surrounding the country in the heart of the Indian Ocean, and what it presents to visitors of the main features of the history, culture and captivating nature of the Maldives, its famous beaches, and various arts. , while the pavilion also displays the wide diversity of natural environment that characterizes the Maldives, and the traditions of its people closely related to the ocean waters, while the pavilion also tells the story of the development of the Maldives, and the philosophy that it always exalts in the field of environmental conservation, which makes it a strong present goal in all its activities, which is consistent with the axis of "sustainability" called for by the "Expo".

In addition, His Highness Sheikh Mohammed bin Rashid Al Maktoum visited the Egyptian pavilion, which is located in the "Opportunities" area, which is distinguished by its design inspired by the Pharaonic civilization, which is one of the oldest civilizations in the world. His Highness was briefed on the exhibits offered by Egypt through the pavilion. Between the fragrance of history and future aspirations, the exhibits included a group of rare archaeological artifacts, dating back thousands of years, and were presented through the “Expo” to introduce the richness of the Egyptian civilization, and the impressive effects it left behind, while the pavilion mixed the depth of history and the dazzle of technology through The virtual tour guide, which accompanies the visitors on a tour that provides comprehensive information about the pavilion and its components in an interactive manner, and the experience of time travel using 3D technologies.

Among the most important artifacts that His Highness saw is the sarcophagus of the priest "Psamtik bin Osir", who lived in Egypt during the period of the end of the era of the New Kingdom from 1069 to 1550 BC.

The Egyptian pavilion, which extends over an area of ​​3,000 square meters, showcases the many investment and commercial opportunities offered through its ambitious development plans, and the growing economic potential that supports it in all sectors, in light of its natural, economic and human components, through its distinctive design distributed over 14 regions. interior.

His Highness Sheikh Mohammed bin Rashid Al Maktoum also visited the Palestinian Pavilion, located in the "Opportunities" area, and met with the Special Envoy of the President of the Palestinian Authority, Majed Faraj, and was introduced to the pavilion's exhibits that reflect the authenticity of the culture and Palestine, its ancient history, and its industries. heritage and modernity, in addition to thriving tourism activities, and the promising investment opportunities it provides.

His Highness Sheikh Mohammed bin Rashid Al Maktoum visited the Swiss Pavilion, which is located in the "Opportunities" area, and its entrance is characterized by the huge red carpet that occupies the entire reception area for visitors, whose image is reflected on the glass facade of the pavilion designed in the form of a cube, and then the crystal cave, which It takes visitors to the experience of a "sea of ​​fog", and the atmosphere of the Swiss mountains, where interactive 3D technologies are used to take visitors to the top of those mountains in a simulation of the Swiss environment, which is characterized by its mountainous nature and green plains.

His Highness Sheikh Mohammed bin Rashid Al Maktoum also inspected the Emirates Airlines pavilion, which is located in the "Opportunities" area, using local environmentally friendly materials, reusable and recyclable, and reducing energy and water consumption, to confirm the principle of sustainability, as His Highness inspected part of the pavilion. The four-storey building near Al Wasl Dome, which provides an idea of ​​the future of commercial aviation, and the role of technology in shaping the air travel sector in the next phase.

• «The comprehensiveness of (Expo) with the diversity of its civilizational, cultural and innovative content increases its positive impact on the region and the world».

• «The meeting of the cultures of the peoples of the world, their history, innovations, development projects and investment opportunities in (Expo 2020 Dubai)».

A view of the aviation of the future

The Emirates Pavilion will be held at the Expo under the slogan “A View of the Aviation of the Future”, including interactive experiences that provide visitors with many information about the future of aviation during the next 50 years, and the use of 3D “hologram” technology, to introduce future aircraft, while the Future Laboratory presents The visitor has the opportunity to learn about the technologies that will make the aircraft of the future faster, stronger and lighter.

The pavilion is an ideal opportunity to learn through interactive screens the solutions offered by Switzerland to ensure a sustainable future, in addition to getting closer to its technologies, innovations and scientific achievements, as well as introducing its most important food products that are famous in the world.