Bergamini. At the start of the trial. Legal: "We have been waiting for this moment for 32 years." Ex-girlfriend in the classroom

Isabella Internò is accused of being responsible, in conjunction with unknown persons, for the murder. A small representation of the Cosenza Calcio fans is presiding over the outside of the court with a flag 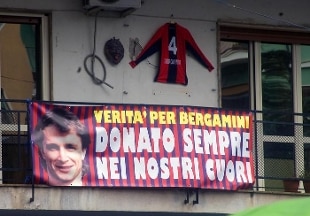 October 25, 2021The trial for the death of Donato Denis Bergamini, the Cosenza footballer who died in mysterious circumstances on November 18, 1989 on state road 106 at Roseto Capo Spulico began this morning before the judges of the Assize Court of Cosenza. . In the courtroom the only defendant, Bergamini's ex-girlfriend, Isabella Internò, accused of being responsible, in conjunction with unknown persons, for the murder of the football player.

"Finally - said the lawyer Fabio Anselmo, lawyer of the Bergamini family upon his arrival at the courthouse - the trial begins. We have waited 32 years for this moment. Sister Donata is still not well while her nephew Denis is present. I'm waiting for nothing, today it will be a technical hearing but in trials like these twists and turns are possible ". No comment, however, from the lawyer Angelo Pugliese, defender of Isabella Internò.

Nephew: "We finally got there. It's a murder, don't call it suicide anymore"

"It was about time, we finally got there, we could have already been there 32 years ago" said his nephew Denis dalle Vacche.

Today it is he who represents his family in some way.

"I don't know what to expect, we will live hearing after hearing. Surely there is a lot of anger - Denis said - it's a murder, please don't call it suicide anymore, it was a very simple case, but luckily the corpse, after 30 years, spoke ".

A representative of the Cosenza Calcio fans is guarding the outside of the court with a flag.