“Magellan” awaits you at “Expo” .. with a noble message

To commemorate the first world circumnavigation of Ferdinand Magellan, who led the first expedition around the world, between 1519 and 1522, the Portugal Pavilion at Expo 2020 Dubai organized a cultural celebration that included a busy program, and the inauguration of a statue of the late famous explorer, carved from plast. 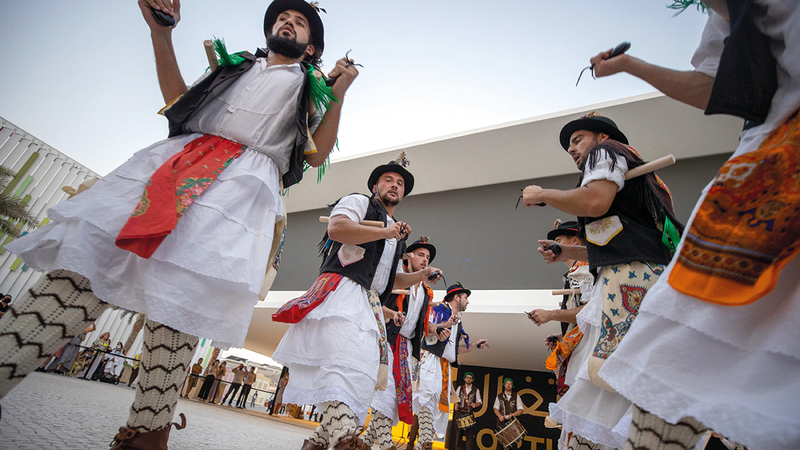 “Magellan” awaits you at “Expo” .. with a noble message

To commemorate the first world circumnavigation of Ferdinand Magellan, who led the first expedition around the world, between 1519 and 1522, the Portugal Pavilion at Expo 2020 Dubai organized a cultural celebration that included a busy program and the inauguration of a statue of the late famous explorer, carved from recycled plastic. Recycled, and collected from different oceans of the world, in a message that Lisbon sends to the world to keep the oceans clean.

Visitors to the pavilion experienced unforgettable moments of enjoyment, as a folkloric troupe made up of a group of young people performed the traditional Portuguese stick dance, in which short sticks are used and performed with graceful and coordinated movements.

The band traveled with visitors nearly 500 years to the bygone era of the Portuguese Empire.

For his part, the Portuguese Ambassador to the UAE, Joaquim Moríar de Lemos, said, "Visitors to (Expo 2020 Dubai) lived unforgettable moments of Portuguese culture and music, which have roots dating back more than 500 years, and they also attended with us the moment of the inauguration of the statue of Portuguese explorer Ferdinand. Magellan.

He added: "The inaugurated piece of art, sculpted by the Portuguese painter Bordalo II, using recycled plastic collected from all the oceans of the globe, with the aim of encouraging young people to care about the sustainability of marine life and the preservation of the ecosystem."

For his part, the Commissioner-General of the Portugal Pavilion at Expo 2020 Dubai, Luis Castro Henrique, said, "The pavilion is replete with various activities aimed at visitors from all over the world, and we are preparing in the coming days to organize a number of important economic events, such as the Furniture Week and the Food Industry Week. Medical and Cosmetics Week, Technology, Innovation and Entrepreneurs Week, and Construction Week.”

He explained: “We have many artistic, cultural and musical events that reflect the historical dimension of our country, as is the case with the event that entertained the audience with musical interludes, which was performed by the player Gonzaloa and Luisa on the guitar similar to the Arabic lute, which I consider a living witness to the depth of interdependence between Portugal. And Arab civilization, Portugal has a lot in common with the Arabs.”

Henrique added that the pavilion witnessed the organization of between 15 and 20 various activities, distributed between culture, art, music, economy and business. What motivates them to do better.

Henrique indicated that the pavilion's slogan is "Portugal.. One World", which is close to the "Expo" slogan, and that their goal of participation is to promote Portugal as a distinctive destination for tourism, culture, history, customs, economy and investment.

He continued: "Expo 2020 Dubai is the perfect event to convey our message to the world that we are a country of tolerance and a country open to foreigners to work, live, reside and do business, and we invite the world to visit us. In our country there are also various companies investing and coming from all over the world.”

• The celebration took visitors to the exhibition for about 500 years, to the time of the Portuguese Empire.

• 42 thousand visitors of different nationalities, attracted by the Portuguese pavilion.

• "Our country is similar to Dubai in the presence of large numbers of foreigners of different races, religions, races and colors on its lands."

Portuguese Ambassador: We have a long history of communication with the Arabs

The Portuguese ambassador to the UAE, Joaquim Moríar de Lemos, said that visitors to Expo 2020 Dubai enjoyed Portuguese music that is close to Arabic music, adding, "We and the Arabs have a long history of communication and cultural exchange, which is not born today, but goes back centuries."