"Four people were rescued from the rubble": what is known about the explosion in a residential building in Naberezhnye Chelny

In Naberezhnye Chelny, Tatarstan, an explosion occurred in a five-story residential building, as a result of which the ceilings of the fourth and fifth floors collapsed. The Ministry of Emergency Situations reported about the evacuation of 32 people from the building, four were rescued from the rubble. The Investigative Committee opened a criminal case under Art. 238 of the Criminal Code of the Russian Federation (performance of work or provision of services that do not meet the requirements of the safety of life or health of consumers). 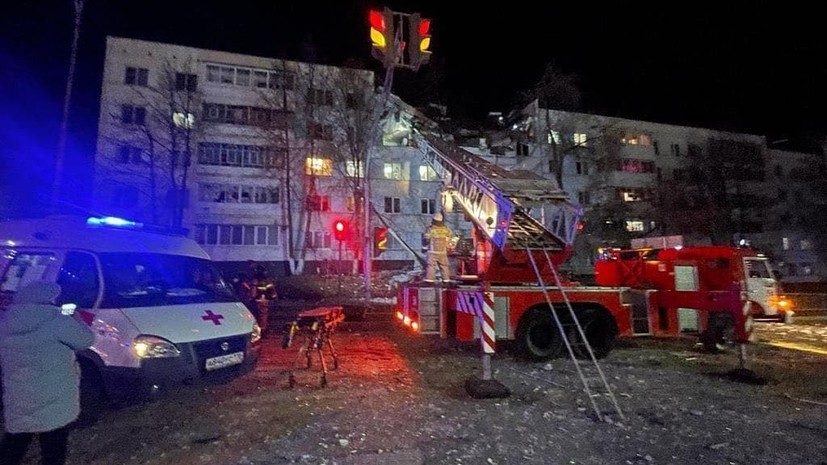 In Naberezhnye Chelny, on Monday, October 25, an explosion occurred in a five-story residential building, as a result of which the ceilings of the fourth and fifth floors collapsed.

According to the Ministry of Emergency Situations, the incident occurred in a panel apartment building at st.

The reason for the incident, according to preliminary data from the department, was an explosion of a gas-air mixture in an apartment on the fourth floor.

“Fire and rescue units are in place.

The floors between the 4th and 5th floors are damaged, ”the ministry said in its Telegram message.

After the explosion, the Ministry of Emergency Situations also reported that 32 people were evacuated from the building.

The department added that people may be under the rubble.

The Ministry of Emergency Situations alerted the airmobile groups, and the department's cynological calculations were sent to the place of emergency.

Police officers cordoned off the area around the house.

Ambulance teams and emergency medicine teams are working near the rubble.

The Tatarstan Prosecutor's Office organized an investigation into the explosion.

As a result of the audit, an assessment will be made of compliance with legal requirements in the operation and maintenance of gas equipment, the supervisory authority said.

Acting went to the scene.

prosecutor of the city Aydar Galiev.

Also, the Prime Minister of Tatarstan Aleksey Pesoshin and the Minister of Health of the Republic Marat Sadykov went to the place of the emergency.

According to the mayor of the city Nail Magdeev, the explosion destroyed six apartments on the last two floors.

Also on russian.rt.com An explosion occurred in a residential building in Naberezhnye Chelny

According to the Ministry of Health of Tatarstan, four people were removed from the rubble: a child born in 2010 - his condition is assessed as moderate, his brother born in 2004, a man born in 1951 in a stable serious condition with multiple injuries, and a girl born in 1999, also in a consistently serious condition.

“Three victims, taken to the emergency hospital in Naberezhnye Chelny, are in intensive care.

The ambulance hospital doctors carry out all the necessary emergency measures to stabilize the condition of the victims, ”the ministry said.

Information about the rescue of several people was confirmed by the Ministry of Emergency Situations.

“As a result of the collapse, six apartments were destroyed, in total 14 people lived in these apartments.

Firefighters and rescuers rescued 4 people from under the rubble, including 2 children.

The emergency services clarified that there is no one under the rubble, according to preliminary information, there is no more, nevertheless, rescuers are carrying out their analysis and examination, dog handlers are also working on the spot.

On the fact of the incident, the Investigative Committee opened a criminal case under Art.

238 of the Criminal Code of the Russian Federation (performance of work or provision of services that do not meet the requirements of the safety of life or health of consumers).

“Currently, investigators are conducting an inspection of the scene.

Other investigative actions are being carried out to establish all the circumstances of the incident, ”the department said.

In addition, the chairman of the IC, Alexander Bastrykin, instructed the head of the investigation department of the IC of Russia in the Republic of Tatarstan, Valery Lipsky, to submit a report on the incident.

At the same time, a source in the emergency services said that a resident of the house suffering from alcoholism could provoke the tragedy.

“According to preliminary data, a man suffering from alcoholism lived in the apartment of a residential building where the explosion took place.

He could provoke a gas leak, "- said the interlocutor of TASS.

The agency's source also said that as a result of the explosion, fragments from broken windows and concrete structures of the house scattered several tens of meters and damaged cars parked near the house.

Against the background of the incident, the Ministry of Emergency Situations opened a hotline: you can contact for information at (843) 288-45-63.

In turn, the press service of the mayor's office of the city of TASS reported that the residents of the three entrances of the building will be temporarily accommodated in the hotel.

“We are settling the tenants in the hotel, buses for transportation on the spot,” they said.

Mayor Nail Magdeev clarified that the decision to resettle the adjacent entrances will be made after the appearance of "clarity in terms of technical inspection."

According to the Ministry of Emergency Situations, a temporary accommodation center with a capacity of 400 people has been deployed in the city's hotel.

The ministry clarified that the authorities introduced a municipal emergency due to an explosion in the house.

“A visiting session of the Committee for Emergency Situations and OPB of the city of Naberezhnye Chelny has been held, a decision has been made to introduce a municipal emergency regime, and a local level has been established,” the ministry said.