The youth unemployment rate has dropped significantly. Where will 9.09 million graduates flock?

The youth unemployment rate has dropped significantly. Where will 9.09 million graduates flock?   The urban youth survey unemployment rate, which has been high in recent years, has dropped significantly in the third quarter, and the employment situation of college graduates has further improved. A related job market survey on the whereabouts of college students shows that state-owned enterprise 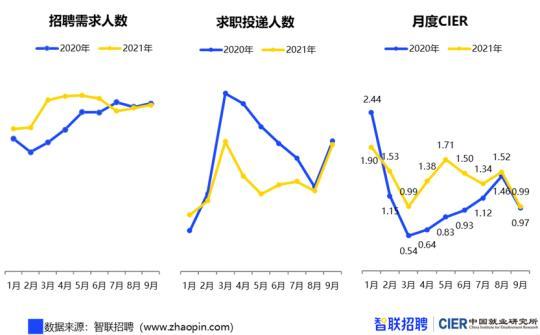 The youth unemployment rate has dropped significantly. Where will 9.09 million graduates flock?

The urban youth survey unemployment rate, which has been high in recent years, has dropped significantly in the third quarter, and the employment situation of college graduates has further improved.

Ha Zengyou, Director of the Employment, Income Distribution and Consumption Department of the National Development and Reform Commission, recently publicly stated that the employment of young people focusing on college graduates has been facing considerable pressure. This year, the number of college graduates reached 9.09 million, and they were also affected by the epidemic and floods. As a result, some small and medium-sized enterprises have reduced their recruits with caution, and the recruitment situation is relatively tight.

The latest "Report on the Employment Market for College Graduates in the Third Quarter of 2021" (hereinafter referred to as the "Prosperity Report") released by the China Employment Research Institute of Renmin University of China and Zhilian Recruitment shows that with the improvement of domestic epidemic prevention and control and the continuous recovery of economic development, In the third quarter of 2021, the employment prosperity index of college graduates declined from the previous quarter, but rose year-on-year.

Another human resources service provider, 51job.com, recently released the "2021 China Key University Graduates' Job Search Status Report", which also shows that there are significantly more job opportunities in 2021 than in the past two years. Among the interviewed 123 college graduate employers, there are 80% of the demand for graduates exceeds last year.

Among the 211 or 985 college graduates interviewed, 79% voted for the “most willing to work” for state-owned enterprises.

The phenomenon of “slow employment” such as the high proportion of postgraduate entrance examinations and civil service examinations after graduation is one of the important reasons for the high youth unemployment rate in our country.

Ha Zengyou said that in response to the increasingly prominent structural employment contradictions among youth groups, the National Development and Reform Commission will work with relevant departments to develop more high-quality jobs suitable for youth groups.

The employment market for college students under the "double reduction"

The business climate report shows that in the third quarter, college graduates entered the peak of job hunting in the fall, and the employment boom index declined from the previous month, indicating that job hunting competition this quarter was fierce.

Since the beginning of this year, China has strengthened supervision of some industries, and while regulating it, it has also caused the loss of jobs in some industries. The most prominent is the education and training industry, which is an industry where young people are more concentrated in employment.

Compared with previous years, one change in the employment market for college students this year is the impact of the "double reduction" policy on employment in the education and training industry.

In the first half of this year’s investigation, education and training was still the industry that recruited the most 2021 graduates among the 16 industries where college student employers are located. However, after the national "double reduction" policy was officially promulgated in July 2021, local governments have also successively The specific implementation documents were released, and the employment supply and demand situation in the education and training industry has been reversed.

The business climate report shows that entering the third quarter of 2021, the number of college graduates in the education/training/academic industry has declined month by month from July to September, while the number of job applicants also dropped significantly in August. Picked up slightly.

The employment prosperity index of college graduates also dropped from 9.77 in August to 4.69 in September, indicating that the "double reduction" policy has had a significant cooling effect on employment in this industry.

From the perspective of occupation, the occupations with good employment conditions for college graduates in the third quarter were real estate transactions, primary and secondary school curriculum guidance, sales consultants, medical equipment, general workers/skilled workers, etc., but real estate transactions, sales consultants, general workers/skilled workers, etc. The nature or content of the job is relatively simple, the technical content is not high, and the salary package is less attractive to job seekers of college graduates, so there is a larger supply gap.

The curriculum counseling profession in primary and secondary schools ranks second among the top ten careers in employment for college graduates. The implementation of the "double reduction" policy has a significant impact on college graduates in primary and secondary school curriculum counseling professions.

From the perspective of recruitment demand, from July to September 2021, the number of recruiting demand for curriculum guidance in primary and secondary schools continued to decline, especially in September. The decline in the number was more obvious, and the prosperity index in September also fell to the lowest point since the second quarter.

In addition to the education and training industry, 51job's survey shows that the number of recruits in the integrated circuit chip and pharmaceutical and medical industries has increased year after year, and the real estate, construction and energy industries have reached the highest number of school recruits in the past five years this year.

The number of new graduates in the banking/insurance and auto/parts industries is higher this year than last year.

With the digital transformation of the economy, most of the new jobs in companies are classified as data and algorithm jobs. The market is seriously in short supply. The product and operation jobs provided to graduates have also increased significantly, especially those related to digital operations. , There is a large demand for young intellectual talents and a high degree of dependence.

At the same time, production and promotion jobs have been further reduced.

Since the beginning of this year, the National Bureau of Statistics has successively announced the surveyed unemployment rate of 16-24 year olds in urban areas. The youth unemployment rate in March was 13.6%, an increase from the same period of the previous year. It rose further to 15.4% in June and 16.2% in July.

Since then, the employment of college graduates has increased, leading to a decline in the youth unemployment rate, which was 15.3% and 14.6% in August and September, respectively, showing a trend of declining month by month.

Wang Pingping, Director of the Population and Employment Statistics Department of the National Bureau of Statistics, said that in June and July, due to the concentration of college graduates seeking employment, the unemployment rate of 16-24 year-old youths rose significantly in the short term. As the graduation season ends, the youth unemployment rate in September has increased significantly. It was down 1.6 percentage points in July.

With the gradual implementation of work after graduates leave school, the employment situation of college graduates is expected to further improve.

Ha Zengyou believes that the high youth unemployment rate is restricted by both aggregate factors and structural factors.

The structural employment contradictions among youth groups have become increasingly prominent, and the phenomenon of disconnection between supply and demand, discomfort in job positions, and "slow employment" occurs from time to time.

Yao Kai, director of the Global Science and Innovation Talent Development Research Center of Fudan University, said that the pressure of competition in the job market for 9.09 million graduates has increased, and employment in some industries and top employers have been involuntarily, which has caused the youth unemployment rate to rise.

There is also structural unemployment among youth employment groups, and the knowledge and skills acquired in colleges and universities are somewhat out of touch with the needs of enterprise employers.

According to a survey conducted by 51job.com, the Ministry of Education announced that the number of applicants for the postgraduate entrance examination in 2021 was 3.77 million, a record high.

40% of the surveyed undergraduate graduates indicated that their first plan is to continue their studies. 76% of the graduates prefer to "enter the workplace after graduation", which is the lowest in the past three years, but the graduate students who most want to become "civil servants" are as high as 11%.

Ha Zengyou said that in the next step, the National Development and Reform Commission will work with relevant departments to make precise efforts to target the employment of youth groups.

Focusing on cultivating and expanding advanced manufacturing, modern agriculture, and modern service industries, we will develop more high-quality jobs suitable for young people and continue to increase the professional knowledge and vocational skills reserves of young people, so as to maximize the adaptation of people and positions, and focus on alleviating structural problems. Employment contradiction.