[When the study is in progress] On the eve of the Spring Festival, General Secretary Xi Jinping went to Guizhou for investigation and investigation and visited and condoned the grassroots cadres and the masses. On the afternoon of the 3rd, he came to Qianxi County, Bijie City to observe the ecological environment of the Liuchong section of the Wujiang River. What is the position of the big river 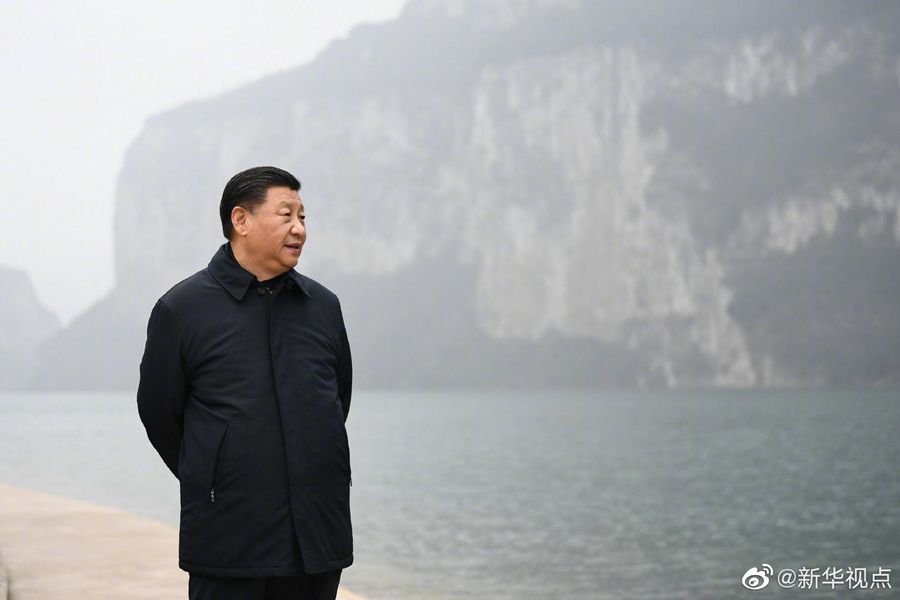 [When the study is in progress] On the eve of the Spring Festival, General Secretary Xi Jinping went to Guizhou for investigation and investigation and visited and condoned the grassroots cadres and the masses.

On the afternoon of the 3rd, he came to Qianxi County, Bijie City to observe the ecological environment of the Liuchong section of the Wujiang River.

What is the position of the big rivers of the motherland in Xi Jinping's heart?

On the eve of the Spring Festival, General Secretary Xi Jinping went to Guizhou for investigation and research and visited and condoned the grassroots cadres and the masses.

On the afternoon of the 3rd, he came to Qianxi County, Bijie City, to observe the ecological environment of the Liuchong section of the Wujiang River.

In Xi Jinping's heart, the rolling Yangtze River and the vast Yellow River are the mother rivers of Chinese children, nurturing our great nation together.

Controlling water pollution and protecting the water environment are related to the well-being of the people, the future of the country, and the sustainable development of the Chinese nation.

Making the water of the motherland cleaner, greener, and more beautiful is a major issue that Xi Jinping is very concerned about.

River travel: footsteps travel to the north and south of the river, up and down the river

Xi Jinping has always been concerned about the protection and governance of water resources. Since the 18th National Congress of the Communist Party of China, his investigation and research footprints have traveled to the north and south, and up and down the river.

In May 2020, when Xi Jinping inspected the ecological restoration and urban environmental construction of the Fen River Basin in Shanxi, Xi Jinping emphasized that the Fen River must be effectively protected and governed to reproduce the beautiful scenery of the Yang Fen River in Kuching and let a puddle of clear water flow into the Yellow River.

In April 2018, when Xi Jinping inspected the East Dongting Lake National Nature Reserve, he emphasized that the ecological environment of the Yangtze River must not be allowed to continue to deteriorate in the hands of our generation, and that a clean and beautiful Yangtze River must be left to future generations!

The feeling of concern is beyond words.

On the basis of field investigations, Xi Jinping has presided over several symposiums on the Yangtze and Yellow Rivers, made a series of decisions and arrangements for the governance of large rivers, and put forward a series of requirements.

Jianghe Policy: Do a good job in major protection and promote major governance

Controlling water pollution and protecting the water environment are related to the vital interests of the people, the party's mission and purpose, and the national economy and people's livelihood.

In January 2016, when a symposium on promoting the development of the Yangtze River Economic Belt was held in Chongqing, Xi Jinping clearly stated that the restoration of the Yangtze River’s ecological environment should be placed in an overwhelming position at present and for a long time in the future, and major protection and no major development should be undertaken. .

In September 2019, when hosting a symposium on ecological protection and high-quality development in the Yellow River Basin in Zhengzhou, Xi Jinping emphasized that we should adhere to the comprehensive management of landscapes, forests, fields, lakes and grasses, systematic management, and source management. Great protection and coordinated promotion of great governance.

Based on this thinking, Xi Jinping focused on the transformation of the coastal economic structure and economic development mode.

We must persist in protecting in development and developing in protection, realize the coordination of economic and social development with population, resources, and environment, so that green water and green mountains can produce huge ecological, economic, and social benefits.

In January 2017, Xi Jinping said in a speech at the United Nations Headquarters in Geneva that we cannot eat ancestral meals, cut off the roads of our children and grandchildren, and engage in development in a destructive way.

We should follow the concept of harmony between man and nature and Taoism and nature, and seek the path of sustainable development.

It is Xi Jinping's river strategy to do a good job of major protection and promote major governance.

In Xi Jinping's mind, protecting the ecological environment is a long-term plan for the great rejuvenation and sustainable development of the Chinese nation, and protecting the big rivers is a key part of it.

He quoted Engels’s thesis in Dialectics of Nature to warn people that humans should not be overly intoxicated by the victory over the natural world.

In April 2020, when Xi Jinping visited Shaanxi, he emphasized that we must take good care of the ecological environment on which we depend for survival and development, and plan for future generations and long-term development.

In January 2020, during a survey in Yunnan, Xi Jinping emphasized that since the 18th National Congress of the Communist Party of China, the concept of ecological civilization we put forward has been deeply rooted in the hearts of the people.

To promote high-quality economic development, we must not take the old path of pollution first and treatment afterwards.

As long as we insist on ecological priority, green development, perseverance, and long-term success, we will surely turn green waters and mountains into golden mountains and silver mountains.

In April 2013, Xi Jinping pointed out during an inspection tour in Hainan that the relationship between development and protection should be properly handled, and efforts should be made to "enhance the green" and "protect the blue", set an example for the construction of national ecological civilization, and leave a sustainable foundation for future generations. The development of "green banks".

The water connects thousands of households, and Xi Jinping drips in his heart.

In April 2018, he walked into Xujiachong Village, Taipingxi Town, Yichang to learn about the domestic sewage treatment in the villages along the Yangtze River.

There is a convenient laundry pool next to the village committee square. Xi Jinping took the sticks used for laundry, leaned down and tried to beat the clothes a few times.

He said that washing clothes is now green and environmentally friendly.

One branch and one leaf are always affectionate.

The great rivers of the motherland have witnessed Xi Jinping's heart for the sustainable development of the Chinese nation.