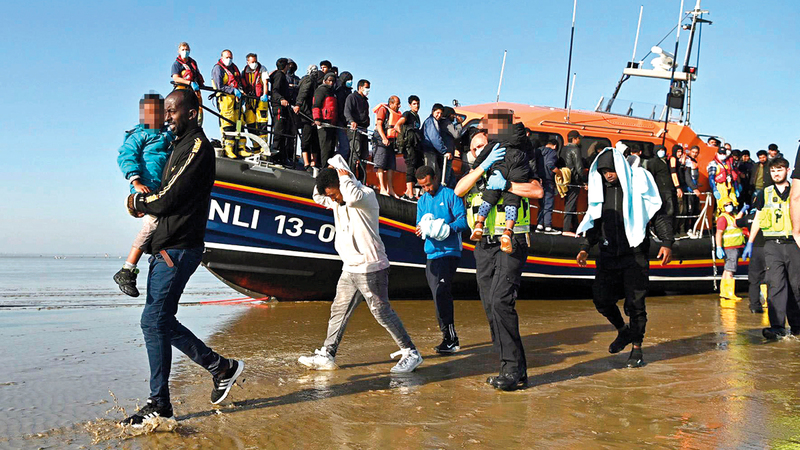 They are enslaved, beaten and imprisoned

The British newspaper, The Times, revealed the disappearance of a number of refugee children as young as nine years old from care institutions after arriving in Britain through the English Channel.

Figures show that all local authorities responsible for caring for migrant children have reported the disappearance of at least 37 refugees aged 13 or younger.

In one case that was spotted in the summer, it is suspected that a 15-year-old Vietnamese boy was forced into slavery, after the Ministry of the Interior put him alone in a hotel and disappeared overnight.

Child refugees, who typically arrive from countries such as Afghanistan, Sudan, Iran, Eritrea and Vietnam, are at risk of sexual abuse and exploitation by gangs.

With record numbers of refugees crossing the Channel this summer, thousands of Afghan refugees resettled and severe delays in processing asylum cases, local authorities claim their situation is on the verge of collapse.

Officials say they cannot handle the number of children who need care.

In Kent, where many refugees have arrived after perilous journeys at the hands of people smugglers, 727 unaccompanied migrant children have been reported missing since 2015.

On a sunny Thursday in July, immigration officials left Tuan a Vietnamese boy alone in a London hotel.

This 15-year-old orphan was a victim of child trafficking. During his trip to Britain, he was beaten, locked up, forced to work as a slave, and forced into a small boat to cross the Channel.

The next morning, lawyers were supposed to see this boy, but he left the hotel.

"By the time we got to the hotel, they reported seeing him leaving with an unknown stranger," one of the lawyers, Stuart Locke, told The Times.

"He should have isolate himself in his room at the time, and he hasn't been found since," Locke says.

After crossing the Channel, Tuan told the authorities that his grandmother had been looking after him in Vietnam, but that he was rendered homeless after her death.

After that, a group of smugglers promised him work and food and flew him to Russia, where he was forced to work without pay, beaten and locked in a room.

He stayed there for five months, eating two meals a day.

Tuan was then taken to France and held in an abandoned house for several days before being taken in early July in a small boat to Britain.

After the boat was intercepted, Tuan was arrested along with other passengers.

He was taken to Earl Wood Detention Center in Bedfordshire and said the cells reminded him of the room in Moscow where he was imprisoned.

A refugee charity took over Tuan's case and he was referred to Luke, a lawyer who specializes in immigrant children.

"At the time, I had real concerns about the dangers of human trafficking," Locke said.

On July 22, the Home Office released Tuan, and he was put in a hotel in London.

Anstalau's firm, Luke's law firm, arranged to see him the next morning, but when they arrived the boy was gone.

Locke later discovered that the police had not been told that Tuan had been missing for a week.

The number of refugee children cared for in England has doubled since 2012, reaching 5,000 last year.

Among the migrant children who disappeared are Vietnamese Son Hung, a 13-year-old last seen in Hastings, East Sussex, in 2019, and Luc Thi Bui, a 14-year-old Vietnamese girl last seen in Lewisham, south London, in March 2020.

Kent County Council has reported 1,430 missing refugee children in the past six years.

and that at least three out of 727 children are ten years old.

In the past six months, 55 migrant children have been reported missing from the State Welfare Board, including a 13-year-old boy.

The council said all but one of the children aged 10 to 13 were found within two hours, and that there were "serious attempts to track him down".

In recent years, the Government Council has had to look after more than twice the number of immigrant children it is supposed to look after, in large part because it is the agency that deals with immigrants crossing the Channel.

The council said that its services had become very "exhausted", and it was close to running out of social workers.

While there was a decrease last year in the number of migrants seeking asylum, during the lockdowns, the number of boat arrivals has increased over the course of the year.

The border force believes that 22,000 migrants had arrived by boat by the end of this year, nearly three times the number recorded last year of 8,420.

Some are smuggled into Britain for illegal business, such as growing cannabis, so they are constantly at risk of being kidnapped by smugglers after they arrive.

There are many Vietnamese immigrant children in this group.

Others often arrive from countries such as Afghanistan, Sudan, Eritrea and Iran with optimism, but failures to look after them - such as staying alone in dilapidated hotels for weeks - cause some to flee, becoming vulnerable to kidnapping by gangs.

With councils struggling to deal with the numbers of immigrants coming from across the Channel, this summer the Home Office booked hotels to accommodate the new arrivals of refugee children.

Hundreds of teenage migrants have been detained in hotels, and charities have raised concerns about their well-being.

• Kent County Council has reported 1,430 missing refugee children in the past six years.

and that at least three out of 727 children are ten years old.

• It is suspected that a 15-year-old Vietnamese boy was forced into slavery, after being placed alone in a hotel by the Ministry of the Interior, and he disappeared overnight.