The Mauritius pavilion, in the Opportunities area of ​​Expo 2020 Dubai, shows its visitors the beauty and splendor of this African country, which is located on the Pacific Ocean, as it invites the exhibition's audience to discover Mauritius through an amazing interactive experience. 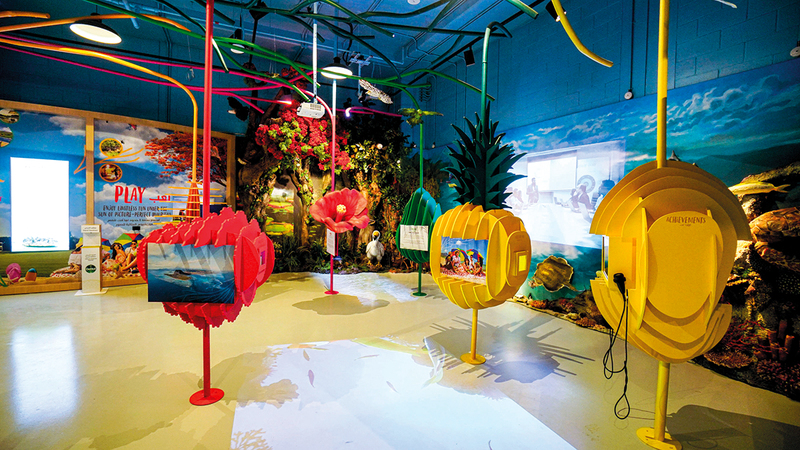 The Mauritius Pavilion, in the Opportunity District of Expo 2020 Dubai, shows its visitors the beauty and splendor of this African country, located on the Pacific Ocean, as it invites the exhibition audience to discover Mauritius through an amazing interactive experience.

Visitors to the pavilion learn about the beauty of this charming island, and its unique landscapes, described by the great writer, Mark Twain (the father of American literature), as "a piece of heaven on earth."

During their trip in the pavilion, they can also contemplate the various plants that are rich in it, including the trochtea botunia, which has become the national flower of Mauritius, as well as seeing groups of birds that inhabit the island, such as pink pigeons, parrots and colorful birds.

The pavilion highlights the development and growth of the economy, which is a living example of the balance of work, living and pleasure, and does not fail to tell the story of Mauritius and meet the elite who worked faithfully to make their country at the top.

Beyond its stunning landscapes and pristine white sandy beaches, Mauritius is particularly proud of being a major attraction for its people. Being the star and key to the Indian Ocean, Mauritius draws its special charm from the cultural diversity of its people.

The Arabs were the first to set their eyes on Mauritius, in 900 AD, when Arab merchants engaged in trade along the coast of East Africa, and they called it “the deserted island.”

In 1507, Portuguese navigators rediscovered it, and named it "Swan Island", but they did not settle there.

The Dutch were the first to call it the island of Moritz van Nassau, in 1589, and used Mauritius as a refueling station along their trade routes to India, but they finally decided to settle permanently in 1638 to prevent the British and French from taking it, but they left the island in 1707, to be acquired by France in 1715, but due to its strategic location, it was coveted by the British colonialism, which raided the island in 1810 and seized it.

After four centuries of European rule, Mauritius gained independence in 1968, becoming the most prosperous country in the Indian Ocean.

Mauritius offers promising investment opportunities, and its pavilion includes a presentation of the advantages that the investor in Mauritius obtains, including: exemption from capital gains taxes, and the availability of an educated, bilingual workforce.

Mauritius also does not set specific conditions on the minimum invested capital, as it provides the investor with a set of trade agreements and free movement of capital, in addition to the democratic political climate that gives it social stability, and provides a stimulating and safe work environment.