Motorcycle GP of Emilia-Romagna: Bagnaia on pole to upset Quartararo Misano Adriatico (Italy) (AFP) To be titled for the first time at 22 years old in MotoGP on Sunday, on the Italian circuit of Misano, Quartararo must maintain after the race at least 50 steps ahead of "Pecco" Bagnaia, his last rival, knowing that he currently has a mattress of 52 units. With so many places to go, it will not be easy for the French, author of his worst qualifications this year at 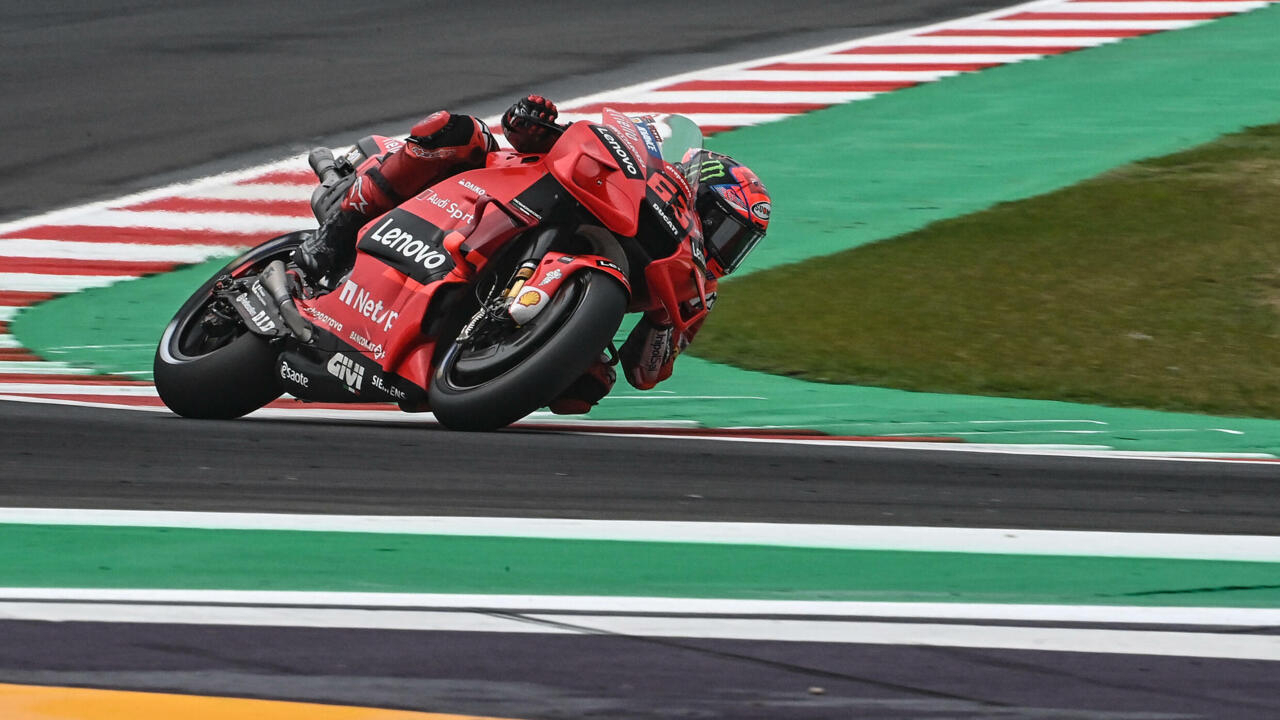 To be titled for the first time at 22 years old in MotoGP on Sunday, on the Italian circuit of Misano, Quartararo must maintain after the race at least 50 steps ahead of "Pecco" Bagnaia, his last rival, knowing that he currently has a mattress of 52 units.

With so many places to go, it will not be easy for the French, author of his worst qualifications this year at the time of his first assault for the crown.

In difficulty since the start of the weekend (and like the whole season for that matter) when the track dries up after a downpour, "El Diablo" has "unconsciously not taken all the risks (...) in conditions ( that he) hates ".

"Disappointed but not too much", he considers having done "the best possible".

Good news for those who are chasing a first title for themselves but also for France in the top motorcycle speed category, the weather is finally looking dry during the GP on Sunday at 2:00 p.m. (12:00 GMT).

"We have great potential in the dry," continues Quartararo, who thinks he can aim for a Top 5, or even a place on the podium.

Quartararo does not want to "rush"

As for the coronation, "there is an opportunity but I must not rush", he insists.

"I don't put any pressure on myself."

"My feeling is that, given the situation, it will be played in the next round (but) + Pecco + also has pressure, maybe he will make a mistake."

Until then, in any case, we cannot blame Bagnaia for not giving 100% to thwart the announced fate of Quartararo, championship leader since May.

The 24-year-old Italian won ahead of the Frenchman in September, at the San Marino GP, on the same circuit he knows "very well" to train "a lot" there and which "suits (his ) riding style ".

"It's the best way to end my Saturday", soberly welcomes the Ducati rider, uncomfortable in the morning but returned to business at the right time to sign his fourth consecutive pole.

Having said that, "I'm going to have to push as hard as if Fabio started right behind me because winning is the only option to keep the championship open," he adds.

His Australian teammate Jack Miller and his compatriot Luca Marini (Ducati-Avintia) will accompany him on the front row.

For beginner Marini, half-brother of local hero Valentino Rossi, this is the first qualification in the Top 3.

Falling (like many) in the second and final part of qualifying, Spaniard Marc Marquez (Honda) is 7th and Frenchman Johann Zarco (Ducati-Pramac), yet among the fastest in practice, 10th.

The KTM-Tech3s of the Spaniard Iker Lecuona and the Italian Danilo Petrucci slip into 8th and 9th positions after their best "qualifiers" of 2021.

Rossi (Yamaha-SRT), who is playing his last GP at home before his retirement at the end of the season in front of not yet full stands, unfortunately cannot say the same: he will only be 23rd and last on the grid.

In Moto3, the Spanish rookie Pedro Acosta (5th on the grid) also has a match point for the title ... at only 17 years old!

To be crowned, he must score 21 points more than the Italian Dennis Foggia (14th).

In Moto2, on the other hand, the fight between Australian teammates Remy Gardner (14th) and Spanish Raul Fernandez (9th), separated by only nine points at the top of the championship, is not about to end.

After this race, there will only be two GPs left (Algarve on November 7 and Valencia on November 14), each time winning 25 points.