Hundreds of mossos d &amp; apos; esquadra and local police officers have demonstrated this Saturday in the center of Barcelona to exclaim "enough!" in the face of attacks on ... 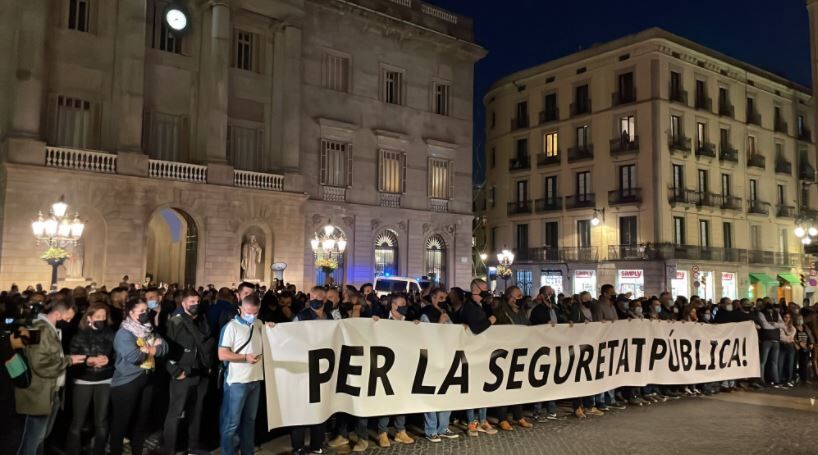 Hundreds of mossos d'esquadra and local policemen have demonstrated this Saturday in the center of Barcelona to exclaim "enough!"

before the attacks on agents and to demand respect, institutional support and an end to the "partisan" use of the security forces.

The protest, which has taken place between the surroundings of the Parliament and the Plaza de Sant Jaume, has brought together hundreds of agents, who have marched behind a banner with the slogan "For public safety", to defend their profession and public safety against the attacks they have suffered in recent months and what they consider a lack of support from the administrations.

In the joint manifesto, the unions denounce that in recent months the police officers have been the object of "direct attacks that have caused a lack of authority and a delegitimization" of their profession.

"The constant politicization of our profession, the partisan use to wear down the government of the day and the lack of political courage to defend the body of the Mossos d'Esquadra, the respective local police, the municipal guards and the urban guards before according to which sectors, as well as the attacks (too continuous) that we have been suffering, have taken us to the streets today, "the manifesto says.

In addition, they warn that the lack of resources with which they have had to face "extremely complex situations", referring for example to the devices against bottles, have caused an "evident exhaustion" that, added to the "lack of political support "It has led to an" unsustainable "situation.

The police officers who have taken to the streets to demonstrate consider that this Saturday's protest should serve "as a minimum" to give a "wake-up call" to the institutional officials so that they act with the "necessary determination" to protect the agents, since, if not, they warn, the welfare state will be "seriously affected".

The convening unions also highlight that the debate on the police model that the Parliament will address has to represent in its conclusions the "vast majority" of citizens, who do not see the Police of Catalonia "as an enemy, but as a professional group that works and guarantees their collective safety, putting it even before the individual safety of the people who make it up ".

Picking up the discomfort in the autonomous body, the major of the Mossos d'Esquadra,

, already denounced yesterday, in the act of the Day of the Esquadres, the rise of "worrying behaviors of intolerance" against the police endorsed by some sectors and asked "respect": "what has to change the world throw stones at the police or burn containers?".

After weeks of growing unrest among police officers in Catalonia, the President of the Generalitat,

, acknowledged yesterday - in a video message broadcast at the Day of the Esquadres - that the Mossos have faced situations in recent months " very complex "due to the pandemic and the" social and economic changes "and he showed them his" full support "and that of the entire Government.

The Minister of the Interior,

, guaranteed that the executive "will persecute" the perpetrators of the "unacceptable attacks" on the police.

Faced with this situation, the unions maintain in their manifesto that this "turn" that has begun to be perceived in relation to institutional support "must be maintained constantly" without it being necessary to call another demonstration.