The trial against the former Minister of the Interior and leader of the League, Matteo Salvini, for preventing for 19 days in August 2019 the landing of a hundred migrants ... 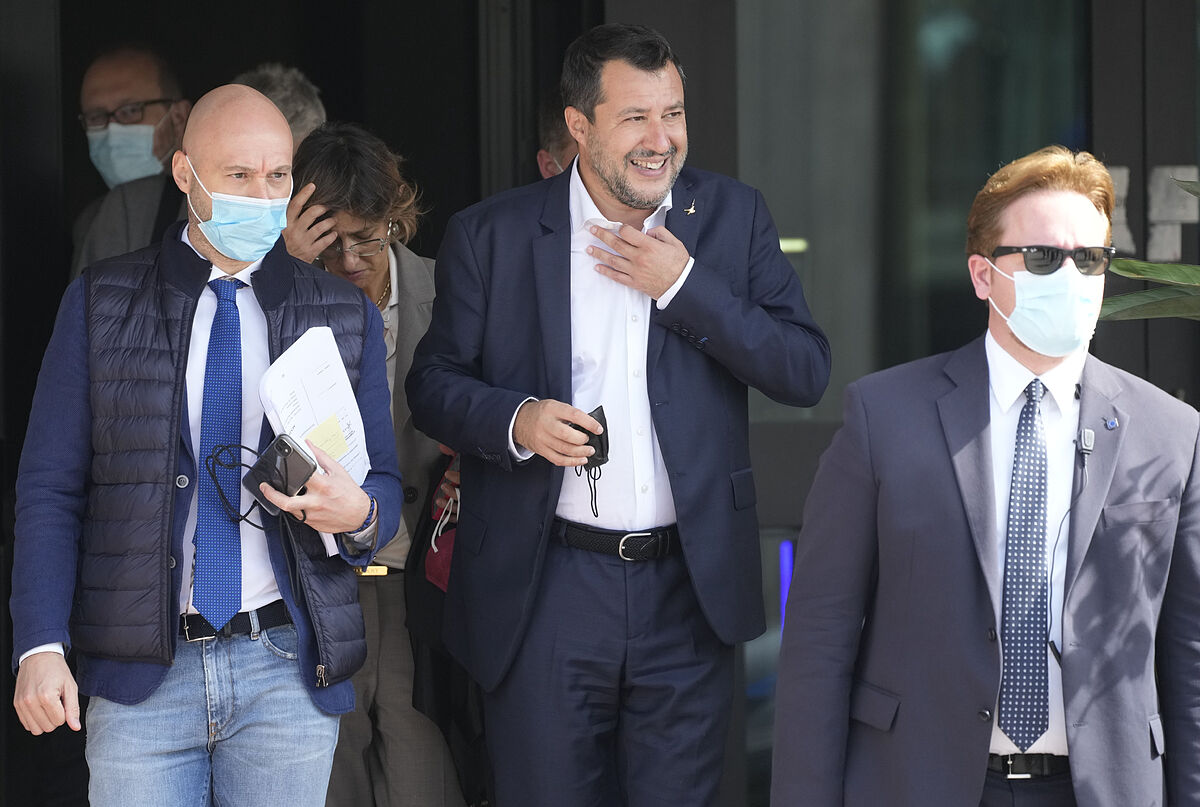 The trial against the former Minister of the Interior and leader of the League, Matteo Salvini, for preventing for 19 days in August 2019 the

, started today in the capital of Sicily, Palermo (Italy), with the admission of all the witnesses presented, including the former head of government, Giuseppe Conte, several ministers and the American actor Richard Gere.

In this first hearing, after a hearing on September 15 that was immediately suspended, further documentation has been presented for the summary and witnesses have been presented by the defense, prosecution and civil parties.

Many of the witnesses are common between the defense and the prosecution, such as

, the Prime Minister with whom Salvini was Minister of the Interior, but also the current head of that portfolio, Luciana Lamorgese, and other ministers of that Executive.

The next hearing in this process in which Salvini is charged with abduction of a person and omission of his functions will be on December 17, when the first seven witnesses who will be military officers implicated on those days will be heard.

During today's hearing, the witnesses presented by the prosecution, defense and the nearly twenty civil parties, including the city council of Barcelona, ​​Palermo and other associations, have been listed.

While Salvini's lawyer, Giulia Buongiorno, has accepted all those presented, the prosecutor, Francesco Lo Voi, has presented his objections to some of the names considering them not relevant, such as actor

, presented by Open Arms, as he was on the ship on August 9 carrying food and showing solidarity to the shipwrecked.

Lo Voi has also not agreed with some of the witnesses presented by the defense, such as the former European Commissioner for Migration, the Interior and Citizenship, Dmtrs Avramopoulos, and the former Maltese Prime Minister Joseph Muscat, explaining that the immigration policy of Malta and that these people would also be protected by immunity.

But Salvini's defense has considered that these witnesses are of vital importance to clarify that there was no kidnapping because the Open Arms had the possibility of going to both Malta and Spain.

Finally, the president of the Second Section of the Palermo Criminal Court, Roberto Murgia, has decided to admit all the witnesses presented

, about 50, so it is expected that it will be a very long trial.

The Open Arms lawyer has defended his list of witnesses, which includes the mayor of Barcelona, ​​Ada Colau, the entire Open Arms crew during that mission and the actor Gere, who was able to verify with his visit to the ship in those days the status of migrants.

The former Italian Interior Minister and leader of the far-right Liga, Matteo Salvini, launched this Saturday the accusation that NGOs such as the Spanish Open Arms, which save the lives of migrants in the Mediterranean, are

not moved by humanity

but by "interests economic ".

This is what he told the media when he left the

first hearing of the process in which he is accused

in the Court of Palermo, in Sicily (south), of the accusation of kidnapping people, having prevented a man from reaching port for 19 days. Hundred migrants rescued by Open Arms in August 2019.

investigations into the money

that NGOs earn from these trafficking so I would not like that beyond humanity what there is is an economic interest in this trafficking of human beings," said Salvini on leaving the bunker classroom of the prison Pagliarelli, where this first hearing was held.

The audience was also attended by the founder and president of Open Arms, Oscar Camps, who

has appeared as a civil party

and about whom Salvini stated: "A Spanish ship that has to go to Spain is not an abuse. Spanish ships have to return to Spain especially if Spain has offered them up to two ports and not be at the whim of a man who perhaps has other intentions ".

It is something simple, a ship with the Spanish flag goes to Spain.

If Spain does not control its ships, it is a problem,

Regarding this process in which he

could be sentenced to sentences totaling 15 years

, Salvini said that he never regretted what he did and that he only feels sorry for taking time away from his children and the Italians "who pay for this political process."

will come from Hollywood

, imagine that process is one in which Richard Gere comes to talk about how bad I am," he said in reference to the actor who was admitted as a witness, presented by the lawyers of Open Arms .

On the other hand, Salvini affirmed that

in Europe are protecting their borders and "building walls" and that even "Spain has done things in Ceuta and Melilla that even Italy has not done."

He added that since 2019, when the Open Arms case occurred,

and deaths in the Mediterranean

have multiplied by five

and that of "these phenomena the NGOs are not the saviors of the homeland but the accomplices."