'No Green pass', the protest returns in several cities

Even the former Ferrari Brigadier, who served thirty years and was released from prison in 2004 without ever disassociating himself from the armed struggle, took part in the march in Milan 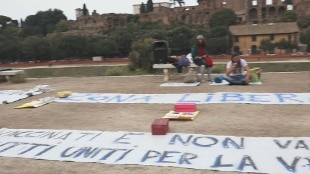 23 October 2021 Throughout Italy, from Trieste to Rome to Palermo, the 'No Green pass' returned to the streets for the 14th Saturday in a row. The demonstrations and protests took place peacefully.

Many citizens took to the streets: an estimated 8 thousand demonstrators in Milan, 5 thousand in Turin, hundreds in Rome, Vicenza, Naples, Trento, Palermo, Syracuse and other cities. Changed slogans and whistles against the Prime Minister Mario Draghi and the Minister of the Interior Luciana Lamorgese.

No Green pass in

There were two 'No Green pass' events organized in Rome. There were no critical issues: no march, or other public order problem. The first event, in

, was led by the actor

, who harangued the participants, alternating the usual chorus "people like us never give up", even the hymn of Mameli. The second, at the

, organized by Free Citizens and other 'No Green pass' movements. Both took place in a static and quiet way, with the supervision of the Police forces who monitored the situation from a distance. A few hundred participants in both demonstrations, as expected by the organizers, who had asked for authorization and expected 500 demonstrators.

No Green pass in Trieste

The Coordination of 15 October in Trieste met with Minister Stefano Patuanelli and announced that the "street demonstrations both in Trieste and throughout Italy will continue, peacefully, until the Government accepts the requests made. The minister has undertaken to open a direct channel with the Coordination ". The demonstration that was held today in Trieste took place in a peaceful manner and the governor of Friuli Venezia Giulia, Massimiliano Fedriga, thanked the "Prefecture, Police Headquarters and all the women and men of the Police forces who, with their professionalism made it possible to manage these days of tension and prevent Trieste from becoming a stage for episodes of violence ".

No Green pass in Aosta

Some hundreds of people poured into Piazza Chanoux, in the center of Aosta, to demonstrate against the Green pass and "for freedom". They danced forming a circle with the banner 'Trieste calls Aosta responds' in the center and some flags of Italy.

No Green pass in Milan

In Milan, the slogan that accompanied the start of the 'No Green pass' parade is "Trieste calls, Milan responds". The procession of the 'No Green pass in Milan crossed the city center. Among the slogans of the demonstrators, also the cry of 'Nunzia, Nunzia', that is the name of the deputy chief of Rome Nunzia Schilirò, suspended after her participation in the demonstration against the Green pass of Rome on 25 September. Former Brigadier Paolo Maurizio Ferrari, who served thirty years and was released from prison in 2004 without ever disassociating himself from the armed struggle, also took part in the no green pass parade in Milan. Ferrari, 76, was also sentenced in the maxi trial to no tav for the clashes of June 27 and July 3, 2011, when thousands of people gathered in Chiomonte to oppose thearrival of the bulldozers and the police who had to take control of the area.

No Green pass in Turin

Some hundreds of people gathered in Piazza Castello, in the center of Turin, to demonstrate against the Green pass. The interventions in solidarity with the Trieste dockers were alternated with appeals to continue the blockades and the stories of lawyers and workers suspended from work because they did not have a Green pass. There have been no tensions at the moment, but there has been a heated discussion with a troupe of the Tgr Piemonte, dismissed with the cry of "terrorist journalists".

No Green pass in Ancona

Also in Ancona there was a demonstration in the center and a garrison at the port against the Green pass.

No Green pass in Terni

New protest garrison against the Green pass this morning in Terni. A hundred people gathered in Piazza della Repubblica to express their dissent on the mandatory nature of green certification. The garrison was organized by the Umbria Dissent Front. Those present expressed solidarity with the demonstrators in Trieste. No moments of tension were recorded.

No Green pass in Naples

Three demonstrations against the Green pass took place in Naples with garrisons at the Duomo, Piazza Dante and S. Domenico Maggiore. A procession paraded in Piazza Dante. About 400 people gathered in front of the Cathedral. On the stairs a bust of San Gennaro was exhibited, made by a local craftsman, with the inscription '

San Gennaro is No Green pass

'. Traffic in the city center went haywire. A third garrison was announced in the evening in Piazza San Domenico Maggiore, in the ancient center of the city. They also waved flags of the Kingdom of the Two Sicilies.

No Green pass in Palermo

'No Green pass' event also in Palermo, with the participation of about three hundred people and among them a significant presence of the Christian-evangelical component. A protest organized by the coordination of 15 October, a movement born at the entry into force of the government decree which requires the Green pass to go to work.

No Green pass in Syracuse

In the afternoon another demonstration took place in Syracuse, with the participation of a few hundred demonstrators organized by Opi -

About 500 people gathered, in the name "Trieste calls Syracuse responds", near the church of the Pantheon from where a procession unfolded to Ortigia.

No riots were recorded.