Boris Johnson reassures: "Elizabeth is back at work at her desk"

It was since 2013 that the sovereign, who was widowed last April, was not forced to spend a night in the hospital 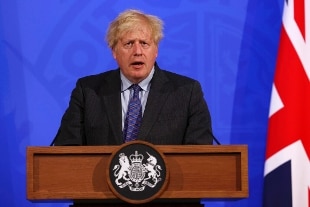 22 October 2021 British Prime Minister Boris Johnson spoke on the story of Queen Elizabeth's health condition, assuring subjects that "as we speak Her Majesty is back at work at his desk". The premier, in sight in a London vaccination center, then sent, on behalf of the entire government, "all possible best wishes" to the sovereign. Previously, a source had told the media that the queen, after her brief hospitalization, was "resting" and performing some "light" duties.

Words added to the official Buckingham Palace words that the Queen, now in Windsor Castle, is in "good spirits". Buckingham Palace was forced late Thursday evening to reveal that the Queen had entered the hospital the day before to carry out "preliminary examinations" after the news was reported by the tabloid Sun. The circumstance has angered the media, which are now suspicious of the official versions of the Palazzo. And among the issues being debated is that of the border that separates Elizabeth's private sphere and right to privacy, from the need to know exactly the health conditions of the head of state. It was since 2013 that the elderly queen, who was widowed last April,she didn't have to spend a night in the hospital. Back then, it was gastroenteritis.

Buckingham Palace also reported the "disappointment" with which the sovereign was forced to give up the official trip to Northern Ireland and the "reluctance" with which she accepted the doctors' advice.

Moreover, that Elisabetta does not intend to step aside or slow down her institutional activity in the least is demonstrated by the polite but decisive way in which she refused in recent days the Elder of the Year award, which had been conferred on her by a magazine.

"Old is whoever feels old," was his reply.