Biden: "We will defend Taiwan in case of China attack"

The president of the United States responds to the provocations of Beijing that two weeks ago sent 150 military aircraft to fly over the island&nbsp; 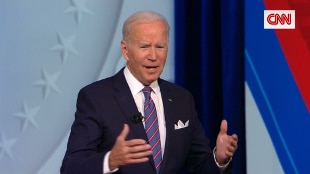 October 22, 2021 "The United States will intervene in defense of Taiwan in the event of an attack by China". This was assured by the American president, Joe Biden, during a debate in Baltimore, underlining that Washington has "a commitment to do so". "The United States - continued Biden- have made a sacred commitment with regard to the defense of NATO allies in Canada and Europe and the same goes for Japan, South Korea and Taiwan".

A few days ago, tensions between China and Taiwan suddenly increased, with Beijing sending dozens and dozens of warplanes flying over the skies of the island. In the first five days of October, more than 150 Chinese People's Liberation Army Air Force aircraft entered the Taiwan Air Defense Identification Zone, Taipei reacted by stating that it will respond to any raids. The maneuvers began on 1 October, the Chinese national holiday, which commemorates the founding of the People's Republic.

Also on the same anniversary, the Chinese president, Xi Jinping, reiterated that the "reunification" of Taiwan with China "will take place". Repeating that it would be "an internal issue in China" and that "external interference" would not be allowed. Shortly after Taipei's response, according to which only the 23 million Taiwanese have the right to decide "the future and development" of the island.

Xi, at the celebrations for the 110th anniversary of the 1911 Revolution, said that the question of Taiwan's 'separation' from China arose in 1949 only because of the weakness and chaos in which the Chinese nation found itself. "Taiwan's secessionism is the biggest obstacle to national reunification, a serious threat to national rejuvenation" Xi concluded.