The “Conference to Support the Stability of Libya” was concluded in the capital, Tripoli, today, organized by the Government of National Unity, with the participation of a number of countries concerned with the Libyan affairs. It is the first international conference hosted by Tripoli since 2010. 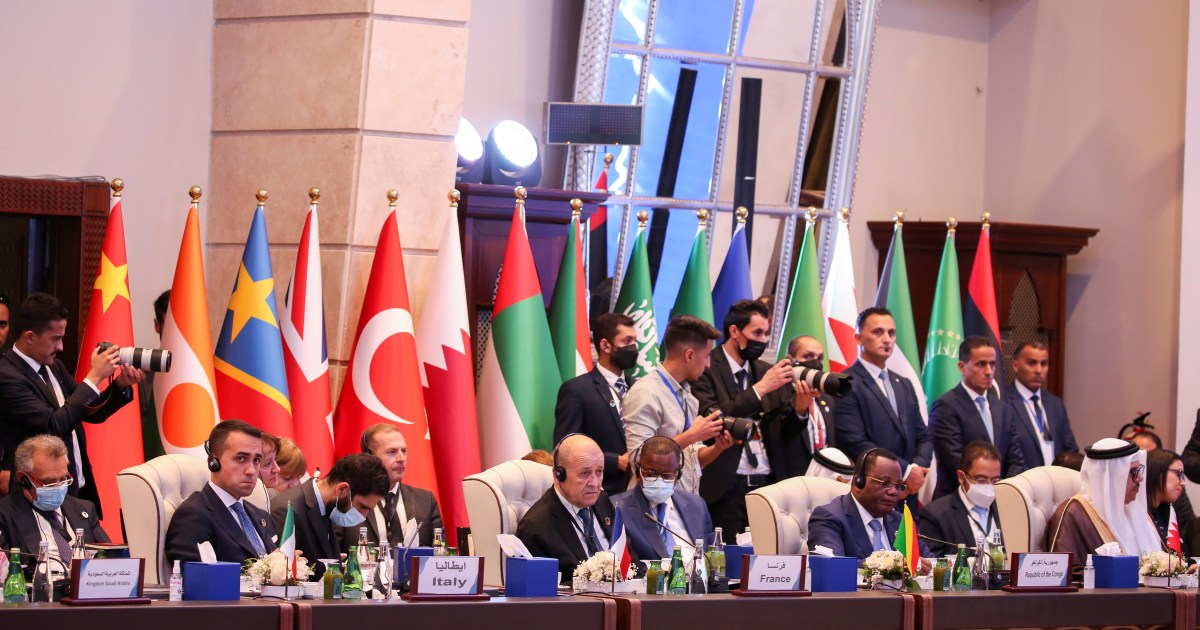 The "Conference to Support the Stability of Libya", organized by the National Unity Government, was concluded in the Libyan capital, Tripoli, with the participation of a number of countries concerned with the Libyan affairs. It is the first international conference hosted by Tripoli since 2010. The participants stressed the need to hold elections on time and to remove mercenaries.

The final statement stressed the holding of elections on time and creating the environment for holding them transparently and impartially, and the importance of taking the necessary measures and benefits to build confidence, and the appropriate environment for holding national elections in a fair, transparent and inclusive manner on December 24th.

27 countries and 4 regional and international organizations participated in the conference, which was held for one day. Discussions in the conference focused on two tracks: a security, military and an economic one to solve the Libyan crisis.

In a joint press conference with her Kuwaiti counterpart, Ahmed Nasser Al-Mohammed Al-Sabah, at the conclusion of the conference, Libyan Foreign Minister Najla Al-Manqoush said that the final statement of the conference affirmed its complete rejection of any interference in Libyan internal affairs, and stressed the importance of taking safeguard measures to hold the upcoming elections in a transparent manner next December. .

She stressed that the government is committed to implementing all international resolutions, including the results of the Berlin Conference, and called on all countries to restore the work of their embassies from the capital, Tripoli.

For his part, the Kuwaiti Foreign Minister said that his country supports the Security Council's decision to expel all foreign fighters and mercenaries from Libya, and also called for adherence to the outcomes of the Berlin conferences.

Al-Sabah, who chairs the 156th session of the Council of the League of Arab States at the ministerial level, said, "We renew our call to the brothers in Libya to renounce all forms of disagreement and give priority to the country's higher interests, and to work towards holding elections on time."

"We commend the efforts of all countries and organizations to make this conference a success in support of stability efforts in Libya, and we remind the Security Council of its pledges to preserve Libyan funds abroad and not touch them," he added.

Earlier, the Prime Minister of the Government of National Unity, Abdel Hamid Dabaiba, called on all parties to respect the results of the elections scheduled for next December 24, in a speech before the conference.

He also called on the Libyans to participate actively in the elections.

For its part, the European Union Mission to Libya said that the Libya Stability Conference represents an important opportunity to review the implementation of the Berlin Conference agreements, prepare for elections and economic development.

It renewed its full commitment to support the stability of Libya.

Prior to that, the United Nations delegate, in her opening speech, affirmed the organization's support for the political process and the holding of elections on time, and called on international organizations and all parties to send observers to the electoral process.

In the conference of the Initiative to Support Stability in Libya, Al-Minfi and Di Carlo discussed holding elections on time, and calls for implementing Security Council resolutions and the Berlin conferences to expel foreign fighters and mercenaries.

He also praised, during his meeting with Qatar's Minister of State for Foreign Affairs Sultan bin Saad Al-Muraikhi, in Tripoli, Doha's role in supporting the paths of a peaceful solution to the Libyan crisis, and the brotherly relations between the two countries.

The media office of the Libyan Presidential Council stated that al-Muraikhi expressed, in the meeting, which was also held on the sidelines of the conference, his hope for the success of the conference, and affirmed his country's continued support to achieve stability and peace in this country.

Al Jazeera obtained earlier a draft of the final statement of the conference, which stipulated commitment to the unity and sovereignty of Libya, and rejected all forms of foreign interference in its affairs.

The draft also condemns attempts to violate the UN embargo on sending arms and mercenaries to Libya, and welcomes the improvement of the security and political situation in the country.

It also supports the plan of the Libyan Ministry of Interior to demobilize armed groups, disarm them, and integrate those qualified from them into security and military institutions.

It is noteworthy that Libya has been witnessing a political and security breakthrough for months. On March 16, a transitional authority (which includes a unity government and a presidential council) assumed its duties to lead the country to elections, under the auspices of the United Nations. Yesterday, Wednesday, the tenth anniversary of the killing of Colonel Muammar Gaddafi, after the outbreak of a popular revolution, took place. demanding the removal of his regime.